Rule of Three by Kelly Jamieson – B  Very good m/m/f menage story where the characters actually talk about their relationship, their plans and (begin to) address potential traps which may arise.  Most of the book is spent developing the relationship and changing it from an m/f/m to an m/m/f.  As unrealistic as I gather they are (I understand from Twitter – my source of all the important information – that polyamory is mostly a couple who each (or maybe just one) have separate relationships with others – a triad is apparently kind of unusual), m/m/f are my favourite type of menage stories.  I felt there is more “equality” to the relationship where all three feel love and sexual desire for the other rather than the concept of the 2 guys “sharing” the woman.   The most unfortunately named Dag* is Chris’ best friend from college.  He has been out of town, having left after realising his unrequited love for Chris would remain so.  He believes Chris is relentlessly straight.  Even though they have shared a lot of women together, there has never been any touching of man bits.  Chris and Kassidy have been dating about a year and have just moved in together.  They are very much in love.  Kassidy develops feelings for Dag, he develops feelings for her and Chris eventually recognises his feelings for Dag.  Lordly it is a sexy book.  I devoured it in virtually one sitting.  The writing was good; Ms. Jamieson has a very entertaining style.  I would have liked more about their life together as a triad, a bit more about some of the practical difficulties and how they would deal together – this stuff was only just brought up at the very end and, while there were discussions, I wasn’t sure how it would work in practice and I wasn’t sure if Chris would actually talk more about his feelings (something he struggled with the whole book).  How would Kassidy’s parents react?  What would happen if there was some jealousy which arose?  Are interactions between 2 of the 3 okay or do all 3 have to be there?  To be fair, this was the getting together book, not the how it works book, but I can’t say I wasn’t curious.  Anyways, I enjoyed it quite a bit.
*I don’t know if it means the same thing here as in the US, but a “dag” is a bit of sheep’s dung caught up in the wool around their rear end and it’s NOT what I want to be thinking of in a sexy book. Especially a sexy book where there’s backdoor activity, if you know what I’m saying.

Hotel Pens by Geoffrey Knight – B  Very good m/m short about travel writer, Joe Jordan, who broke up with his lover some time ago and has been lonely ever since.  Because of his job, he’s always in hotels and he’s a keen collector of their pens.  While in New York for work, he meets Claude, a French ex-pat who is living at the Beacon Hotel and translating m/m romance books into French. Claude courts Joe and teaches him a thing or two about love, himself and New York by writing various messages in pen on Joe’s body in a kind of scavenger hunt.  I found the writing overall to be engaging and sensitive and I liked how as Joe rediscovered New York, he rediscovered himself also.  I was also happy that Joe had things to offer Claude and it wasn’t all one-sided.  The story was very short (56 pages) and ends in a HFN ending.  I wondered what would happen to the couple after – Joe is still a travel writer after all, but maybe there will be further stories for these two?  The author is Australian but I think he’s definitely been to New York, there is a great sense of place in the book. 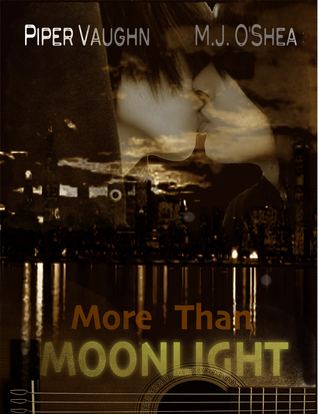 More Than Moonlight by Piper Vaughn and M.J. O’Shea – B – Cute and sweet (with a touch of hot) series of 3 vignettes about Shane and Jesse from Luck, which serves as a kind of prequel to Moonlight Becomes You.  This one is available free online, as are a couple of other shorts in this world.

Moonlight Becomes You by Piper Vaughn & M.J. O’Shea – C  Particularly having read the prequel vignettes first, I was impatient to find out what had happened to Shane and Jesse and it took quite a bit of the book for me to find out.  Jesse is no longer in Luck at the start of this book, which begins some 10ish years after the events of More Than Moonlight.  Shane made promises to Jesse then which he seems to have broken quite spectacularly.  Luck are invited on a tour with Moonlight, the mysterious Kayden Berlin’s band.  As I read, I remembered reading a review of it from about the time the book was released and the plot came back to me.  There’s no prizes for guessing who Kayden really is.  I liked the writing style and the characters well enough but the plot was kind of silly and hard to believe and I thought some of the dialogue, especially toward the end sounded a bit mushy for badass-rocker-type guys.  I’m interested in reading more of the series (all on my TBR), but One Small Thing was much better, in my opinion.

I’ll have reviews of Uses for Boys by Erica Lorraine Scheidt and Where Nerves End by LA Witt going up soon.  I also read Never a Hero by Marie Sexton this month but you’ll have to wait til closer to the release date to see the review.  I also read Frost Burned by Patricia Briggs and I’m currently reading The Best Man by Kristan Higgins and those reviews will go up next month sometime. 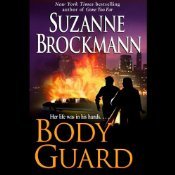 Bodyguard by Suzanne Brockmann, narrated by Carrington MacDuffie – B  The book was originally released in December 1999 – who knew leggings would make a comeback by now?  It is somewhat dated – $1 million isn’t worth as much now as it was then (cue Dr. Evil music).  I read the book a few years ago and I remember it fondly as one of my top 2 Brockmanns (the other one being Heart Throb).  Would it stand up on a return visit?  Would the audio version work for me?  MacDuffie is a very experienced narrator but it was the first time I’d listened to her work.  She reminded me quite a bit of Anna Fields actually.  Her male voices were distinguishable but not terribly low in pitch, her tones crisp and clear and her expression very good.  Harry O’Dell is an FBI agent – think a cross between Mel Gibson’s Lethal Weapon characters and John McClane – in my head he looks like Bruce Willis even though Harry has messy hair.   Honestly, this book has one of the best ever opening scenes.   I remember wanting to see a movie of this book when I first read it.  I still do.  (although, updated a bit please). 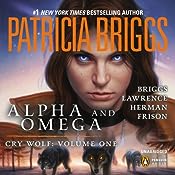 Alpha and Omega by Patricia Briggs, narrated by Holter Graham – A+  I have been waiting for this novella to be released on audio for so long. It really is an essential part of the story – more like the first few chapters to Cry Wolf really.  I don’t think Cry Wolf can be fully appreciated without having devoured Alpha and Omega first.  Up until very recently though, if you wanted audio, you missed out.  Holter Graham is such an excellent narrator.  His voice for Anna is the closest thing to female I’ve heard from a male narrator in a very long time, possibly ever.  And his Charles voice.  Perfection.  Mr. Graham changed his Charles voice a bit in Hunting Ground (which I was disappointed about quite frankly) but, to my ear, he went back to the original Charles voice for this – which is entirely right as Alpha and Omega precedes Cry Wolf and Cry Wolf follows on immediately (and I do mean immediately) after – so to change his voice in between would have been very jarring indeed.  At least some time had passed between Cry Wolf and Hunting Ground.  I love this series and the narration and the writing are a match made in audiobook heaven in my opinion. Briefly, the story is this:  Anna is a werewolf being abused by her pack. Charles is sent by his father the Marrok to investigate strange goings on in the pack and is asked to protect Anna while he’s at it.   Just excellent.

Reviewes of Uses for Boys by Erica Lorraine Scheidt*, Rush by Maya Banks, About that Night by Julie James and Crystal Cove by Lisa Kleypas  will be going up soon at AudioGals and Speaking of Audiobooks.  I’ll have reviews here of Lois McMaster Bujold’s Shards of Honor and Barrayar.

*That’s right, there will be a review of the book and an audiobook review too.  It’s a twofer!

ETA:  Uses for Boys review is up at AudioGals – go here.

Here’s what you may have missed:
Bellskis 1 & 2 by Astrid Amara
Second Hand by Marie Sexton and Heidi Cullinan
Fearless and Priceless by Cat Grant
New Life by Bonnie Dee
By His Rules by JA Rock
Sacred Hearts by Dev Bentham
Wayward One by Lorelie Brown
Dirty Laundry by Heidi Cullinan
One Dance with a Duke by Tessa Dare (audiobook review)
Addicted by Charlotte Stein
A kind of review of Reaper’s Property by Joanna Wylde
Screwing the System by Josephine Myles
How to Misbehave by Ruthie Knox


I was also over at AudioGals with a review of Back to You by Robyn Kayeand Pamela Clare’s Naked Edge.

4 comments on “February Round Up”