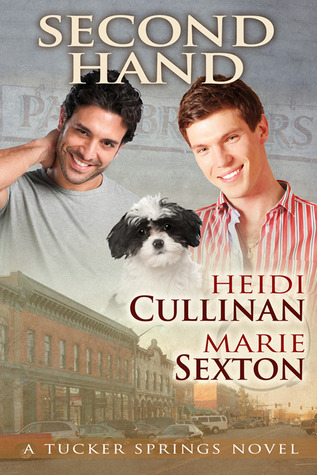 Why I read it:  Marie Sexton and Heidi Cullinan are two of my favourite m/m romance authors.  I’d been saving this one but after reading and loving Dirty Laundry (Tucker Springs #3 Heidi Cullinan) recently, I decided I definitely needed more Tucker Springs.
What it’s about: (from Goodreads)  Paul Hannon moved to Tucker Springs for his girlfriend, but she’s left him with a house he can’t afford and a pantry full of useless gadgets. All Paul wants is to get back to normal, even if he’s not sure what that is anymore. When he wanders into Tucker Pawn for a gift to win her back, he meets El Rozal, pawn shop owner and all-around cynic. El Rozal doesn’t do relationships, especially not with clueless straight boys still pining for their ex. El may make his living dealing in castoffs, but that doesn’t apply to men. Still, when Paul starts clearing out his old life, pawning kitchen equipment he never wanted in the first place, El is drawn to Paul in spite of himself. Paul and El have nothing in common except a past full of disappointments. There’s no reason to believe the two of them could fit, but in El’s line of work, one man’s junk is another man’s treasure. When it comes to love, El and Paul may learn that secondhand doesn’t mean second best.
What worked for me (and what didn’t): I loved the slow build of the romance in this story.  Told in alternating POV (first for Paul and third for El), I enjoyed getting inside the minds of both men.  El was smitten right from the start and his methods of making sure Paul returned to the pawn shop amused – Paul was so oblivious to what was going on around him but El didn’t take advantage. El tells Paul late in the book that he was happy to be the one to wait around long enough for Paul to notice and I liked that El didn’t make Paul suffer for it – it was part and parcel of who Paul is and El loved him.  This is very much juxtaposed with Stacey’s treatment of Paul which is ALL ABOUT HER.
I could definitely relate to the second hand/second rate theme in the story and this line (from Paul) in particular spoke to me.

“I just want to be the first choice for someone for once.  Just once.”

One, out of the many important things my own husband and I provide for each other is that “first” thing.  It’s something we had not experienced in our lives before we met and it is something we value and treasure in each other so I definitely had a soft spot for El and Paul.
Given the slow burn and build up of El and Paul’s courtship, I felt the end and the final conflict was a bit too quick.  I would have liked it to have taken a bit more time because it felt rushed at the end.
I loved Paul’s mother – it would be so great if all kids (no matter their age) who came out to their parents got that kind of reaction. Plus, his mother was an absolute hoot – she didn’t like Stacey (the ex) (and neither did I – what a piece of work!) and when Paul was thinking about whether he should just take Stacey back and not deal with the whole being out deal she says:

LOLOLOL
Having read Dirty Laundry first, I got the impression that the relationship with El had steadied Paul and helped him to gain self confidence and authority in his life – they didn’t appear much in Dirty Laundry but that was my thought from the glimpses I saw.  This helped actually because El got a bit bossy with Paul right at the end of the book – which, in context, was fine, but I was happy to see that their relationship was more balanced with time – in Dirty Laundry El is giving up smoking, something he is clearly doing for Paul.
I wonder if El’s mother’s hoarding got any better after the 4th of July or whether it was merely El who had the revelation.  I liked the balanced treatment of the issue in the book.
Even though Stacey isn’t very nice and El’s mum is a hoarder, there are plenty of other females in the story portrayed very positively – El’s abuela, Paul’s mother, El’s sister Rosa so I never felt the book was out of balance that way.
It’s a coming out story in two ways – Paul coming out of the closet and El coming out of being shut away.  Sure he’s been out and proud, but he’s locked his heart away.  His mantra is “do not engage”.  When he meets Paul, he finds himself wanting to engage and this spills over into his relationship with Rosa and Patti – for the better.
What else?  I really liked it and now I wish I could visit Tucker Springs.  (I can’t leave yet, so now I’m reading Where Nerves End, the first Tucker Springs book, by LA Witt and I have Never a Hero (Tucker Springs #5 – Marie Sexton) on my TBR so I think that shall be next after that.  And Covet Thy Neighbor (Tucker Springs #4 – LA Witt) is out soon (pre-ordered!). My OCD is a bit challenged by reading out of order but the books do stand well alone so order really isn’t that important.
Grade:  B+

Tagged with: Marie Sexton, mm romance
Posted in: B reviews