Author: Kaetrin
Carol of the Bellskis 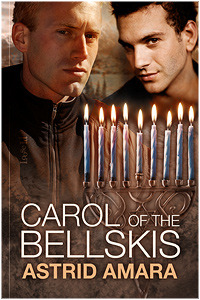 Why I read it: This book (and the next) has been on my wishlist for a while and I was reminded of them again in the comments of a recent Vacuous Minx post.  So I went shopping.
What it’s about:  (from Goodreads)  Paralegal Seth Bellski is tired of being the secret lover of his boss, Lars Varga, founding partner of Finch & Varga Law. So when he asks Lars to spend Hanukkah with Seth’s family at their kosher B and B in Whistler, B.C., and Lars refuses, Seth realizes he will never get his self-conscious boss out of the closet.So Seth prepares to spend his Hanukkah holiday alone in the B and B. Instead he finds himself running the place, as his aunt and uncle are missing, and seven demanding, peculiar, and danger-prone guests have arrived. To make matters worse, Lars shows up, begging forgiveness. Lars’s touches remind Seth of why he put up with his boss’s behavior in the first place. If only the words that came out of that beautiful mouth were as sweet as his kisses.But how can Seth find time to fix his broken relationship when the guests are demanding kosher, gluten-free diets, losing their pet terriers, and hitting their heads on the ice? Seth and Lars find themselves put through the paces of being a married couple, all while still broken up. But then again, if they can survive this Hanukah, maybe they’ll be singing a carol of the Bellskis.
What worked for me (and what didn’t): This fun Hannukah themed novella is told from Seth’s first person POV.  Seth is a paralegal at Lars’ law firm.  They’ve been together for a year but on the downlow and  Seth is tired of being a dirty little secret.  When Lars pulls out (har har) of a holiday to a family run B&B in Whistler for Hannukah, they break up and Seth goes alone.  When he arrives his aunt and uncle are nowhere to be found, guests keep arriving (with various special requests)  and Seth is beside himself.  When Lars turns up (lucky he happens to be a very good non professional chef), Seth accepts (albeit with reluctance) his help so that the guests have a decent Hannukah while he tries to locate his missing relatives.  In the meantime, Lars, having realised that if he doesn’t make some big changes, he’s going to lose Seth altogether, uses the holiday period to try and win Seth back and convince him Lars is a good bet.
It was funny and farcical and I was smiling for most of the parts involving the guests – they were a good foil for the more serious nature of the conflict between Lars and Seth.  The reason for the aunt and uncle’s absence was a bit thin I thought and that didn’t work quite so well for me and I thought the end was abrupt – still, there was enough to see that Lars was serious about his decisions and I believed her really did love Seth.
The Vacuous Minx post I referenced above talked about power dynamics in m/m romance and there is a good example of it in this series.  Lars is the more dominant partner, but after Seth stands up for himself (thereby taking some of that power for himself), Lars is left scrambling.  The events in the next book, show very well how the power dynamic has changed over time and made their overall HEA very believable.
Favourite Quote:

“Well, let’s get on it, then,” Lars said, leaping to a standing position and clapping his hands. “Kosher birthday cake. Good thing I’ve stopped using horse legs in my frosting.” 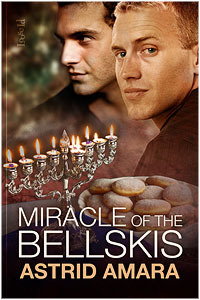 What it’s about:  (from Goodreads)  Too much family…too little Egg Nog.

It’s been three years since Seth Bellski forced his boyfriend and ex-boss Lars Varga out of the closet. Since then, Seth has passed the bar and become an attorney, and Lars has started his own firm. Their sex life has gotten steamier, and everything seems perfect between them. Until the holidays arrive.

It’s bad enough that Seth’s mother and father want them over every single night of Hanukkah. And that Lars’s less-than-tolerant parents are sleeping in the room next door for the duration of Christmas, putting the kibosh on their kink. They also end up attorneys representing opposing sides in a divorce case, one which quickly proves to be much more than it seems.

What worked for me (and what didn’t): I actually enjoyed this one a little better than the first novella – partly because it was a little longer and partly because the subplot regarding the divorcing couple being represented by Lars (husband) and Seth (wife) was, while a bit of a stretch, more believable than the reason for the aunt and uncle’s disappearance in the first book.
I also love stories “after the HEA” – everyone knows that even the happiest of couples have issues that crop up that can threaten their relationship and seeing how a couple has grown and changed over time and how they work things out (hopefully with maturity – at least, if I’m going to like it, that is) interests me.  This story is also set at Hannukah and even though Seth and Lars are pretty happy together, now they have to deal with their respective families – complete with a model train loving father (Seth) and the cold and aloof Vargas.   Once again there is a bit of farce and a lot of humour but I really liked how Seth and Lars had grown since the events of Carol of the Bellskis.  Seth is now a lawyer but rather than working immediately with Lars (who has started his own firm as (I believe) as sole practitioner), he decided that he needed to work elsewhere first so that he could join Lars in practise as more equal partner.  I really liked this.  I liked how both parties accepted this was a good for them move and how supportive Lars was and how sensible Seth was – it seemed to me they were making good decisions for a healthy relationship.   I didn’t really get the impression that Lars ever thought Seth was inferior in the first book, but it is clear that Seth is active about making sure that he takes an equal place and Lars in no way is discouraging of that.
There are some wonderfully funny descriptions in both books and amusing depictions of family life mixed in with the general story arc.  I really enjoyed the writing style and I expect I will be reading more from this author.  I wonder if there will ever be a Bellski’s 3? I can only hope.
Favourite Quote:

He popped open the door and saw Mr. and Mrs. Varga hadn’t moved an inch. They halfheartedly dipped their bread, limply shaking off the excess like sad seagulls in an oil disaster.

Tagged with: mm romance
Posted in: B reviews