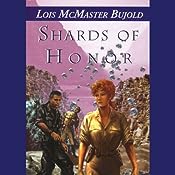 Why I listened to it:  I’ve had this on my TBL for a while and I was in the mood for a fantasy (although in this case, it’s really more sci-fi) romance from a reliably good author and I had it on good authority that the narrator was awesome too.
What it’s about:  (from Goodreads)  Cordelia Naismith, Betan Survey Captain, was expecting the unexpected: hexapods, floating creatures, odd parasites… She was not, however, expecting to find hostile humans on an uninhabited planet. And she wasn’t really expecting to fall in love with a 40-plus barbarian known to cosmopolitan galactics as the Butcher of Komarr. Will Mother ever understand? And can such an odd beast as love survive an interplanetary war?
What worked for me (and what didn’t): Quite a few of my reader friends have recommended the Vorkosigan saga books to me.  This book had been sitting on my TBL for quite a while and I finally found the space to listen.The story is told in Cordelia’s third person POV and I was a little disappointed when at the beginning of the listen it became apparent that she was going to be stuck with a very deep male voice for the whole book.  Grover Gardner has a low baritone and he doesn’t even attempt a female voice.  While I appreciated there was no drag-y falsetto, it took some getting used to to “hear” Cordelia in that deep rumble.  But, my friend Brenda told me that the narrator was awesome and the book was as good so I bore down and kept going.  I’m so glad I did.  After a while, the deep voice stopped bothering me because Gardner conveyed the character so well in other ways.  Even though there was little difference between Vorkosigan’s voice and Cordelia’s, their characters were so different and distinct, that I had littel difficulty in identifying who was talking.  I realised that my friend was right. Gardner is an awesome narrator.The beginning has a vaguely Enemy Mine feel to it  (even though both characters in this case are human)- Cordelia is captured by Vorkosigan who himself has been the victim of a crew mutiny.  Cordelia is clever and resourceful and manages to rescue Vorkosigan quite a few times in the book.  While Vorkosigan is never portrayed as inferior in any way, it is Cordelia who is the “hero”.    After their first encounter, Cordelia and Vorkosigan meet up again some 6 months later – again Cordelia is a prisoner and again their planets are at war.  Even though they have fallen in love with each other, their political differences keep them apart.  The themes of honor and love are wonderfully developed and the story is intricate, with plenty of political machination (with neither the Betans nor the Barrayarans being completely angel or demon) without being confusing or in any way boring.

The romance is very gentle – there’s barely even any kissing but I was satisfied enough.  The longing and love these two felt for each other was very apparent.

I did find it a little hard to follow at times – there are a many characters with similar names and keeping track of them was a bit difficult.  I felt like a cast of characters would have been useful so I could place them better – it’s one of the disadvantages of audio I think.  However, the advantage of having Gardner read the story to me and so wonderful convey the characters, more than made up for it.

What else? There was a part at the end which didn’t quite make sense to me.  At first I thought that a snippet from another book had made its way to the end of this one.  It sat outside the rest of the story and I found it a bit odd.  Perhaps it will make greater sense as the series progresses?I had only listened to the Sharing Knife series and The Curse of Chalion by this author before – I loved them but had been a little wary of venturing more into sci-fi territory from fantasy land.  I’m glad I did because this one’s an absolute winner.
Grade: B+/A-

Tagged with: Lois McMaster Bujold
Posted in: A reviews, audiobooks, B reviews

13 comments on “Shards of Honor by Lois McMaster Bujold, narrated by Grover Gardner”