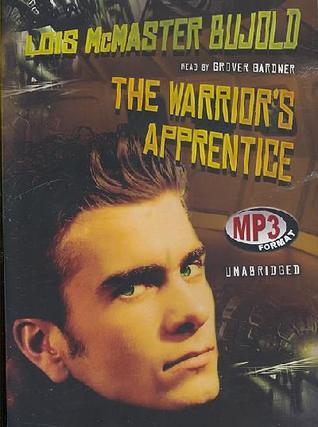 Why I listened to it:  I decided to sneak in one of my own listens between review audios.  This isn’t a romance but I love the Vorkosigan world so the series is one of my rare exceptions.
What it’s about: (from Goodreads) Miles Vorkosigan is the leader of a fast growing mercenary force and the hero of an all-out space battle. At the end of the conflict, he heads a fleet of 19 ships and 3,000 troops. The only problem is, it is treason–as in, a hanging offense–to command a private army.
Warning: **Mild series spoilers for Shards of Honor/ Barrayar**

What worked for me (and what didn’t): When I last left Miles Vorkosigan at the end of Barrayar, he was a rambunctious 5 year old, getting into mischief even while breaking bones all the time due to his medical condition.  The series picks up here, with Miles at age 17, trying out for the Barrayaran Military Academy.  Aral (Miles’ dad)  is now the Prime Minister, Gregor having ascended to the throne on his majority.Due to Saltoxin poisoning when he was in utero, Miles is short of stature (just under 5 feet so far) and has very brittle bones.  A mishap on the obstacle course means his hopes of becoming an Officer are dashed.Miles has a huge crush on Elena Borthari, now 18, and, to try and woo her, he agrees to help her discover information about her mother.  Miles, Elena and Sgt. Borthari travel to Beta Colony ostensibly to visit his grandmother, but Miles has a secret plan to stop at Escobar and see what he can find out about the mysterious woman who is the other half of Elena’s DNA.Miles has a somewhat amazing ability to get into scrapes.  He jumps from frying pan to fire multiple times, each solution to problem A becoming a worse problem B.  Even as I was enjoying the story immensely, part of my brain was marvelling at the clever writing which so deftly brought Miles (and myself) full circle to wrap everything up.

There is very little by way of romance in this book and, what there is, doesn’t really involve Miles.  I must admit when I first listened to Barrayar, I wondered if Elena and Miles would end up together.  I thought it was very clever of Ms. Bujold to dangle the possibility and then explain why it would not work, also giving Miles some heartache to temper him further as he grows to full adulthood.  Of course, after listening to Barrayar, I became aware that Miles gets his HEA in A Civil Campaign (quite a few books yet to go) so I wasn’t upset as I may otherwise have been.  Nevertheless, this isn’t a genre romance. It is sci-fi adventure.

Miles is young, but his disabilities mean that he has to be flexible in mind (as he cannot be in body) and creative with problem solving.  He gets into messes, but he is a young man of honour and he is good hearted.  Honestly, the scrapes he gets himself into here are all from the best of motives.

The story was funny, clever, emotional (I got teary at one point), exciting and smart.  I like Miles and enjoy the Vorkosigan world.

Grover Gardner is such an excellent narrator.  I did notice in this one that there were a few slips in terms of when sentences were supposed to end and when they actually did and one or two phrases which were intoned incorrectly.  But they are small niggles.  He renders Miles with deftness fitting to how he is written and the other characters are also similarly well drawn and voiced.

I find I can be more adventurous in my audiobook listening than I want to be in my reading.  When the narration is this good and the story this entertaining, it is no hardship to slip away from the romance genre for a little break.

Bed was a null G bubble warmed womb-like by infra-red. Null G sex, Miles had heard, was one of the high points of space travel. He’d never had a chance to try it personally. Ten minutes of attempting to relax in the bubble convinced him he never would either. Although, when heated the smells and stains that permeated the chamber suggested that a minimum of three people had tried it there before him recently.

Grade:  B+
BUY IT
AMAZON

2 comments on “The Warrior’s Apprentice by Lois McMaster Bujold, narrated by Grover Gardner”