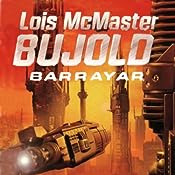 Why I listened to it:  I loved Shards of Honor so much I wanted to listen to the next one to see what happened next.  Luckily it was on my TBL.
What it’s about:  (from Audible)   Political intrigue, culture clash and romance make a stirring mix in this award-winning follow-up novel to the acclaimed Shards of Honor.
In the wake of interplanetary war, former commander Cordelia Naismith has deserted her own planet to marry the leader of the defeated enemy, Aral Vorkosigan. On his home planet of Barrayar, two rival factions are eyeing the recently vacated throne, and Aral, recently appointed Regent of Barrayar by the Emperor on his deathbed, must stand between them.
Lord and Lady Vorkosigan, Aral and Cordelia struggle to establish stability in a fragile government thrown into confusion by the transition of power and the threat of civil war. When a palace coup endangers the government, their lives, and her unborn son, Cordelia takes action to secure the safety of her new family and new home.
What worked for me (and what didn’t): I have been so fortunate in my reading and listening this year.  Soon I shall worry I’m getting soft.     Following on almost immediately from Shards of Honor, Barrayar is the story of what happens when Aral takes the post of Regent for the young emporer Gregor.  Barrayar is politically unstable and there are a number of opportunists who would like to take advantage and grab power for themselves.    Cordelia and Aral are expecting their first child and there is risk to the child, herself and her beloved husband.
The story is told from Cordelia’s third person point of view.  She is such a wonderful character.  Smart and wry, getting into trouble for her constant battle with the status quo on Barrayar which does not support equality for women, does not tolerate the disabled and seems, in many ways, so much more backward than her own homeworld.  But, for good or ill, she is on Barrayar to stay and she has to make the best of it.Aral, for his part, is mainly supportive of Cordelia but he sometimes struggles a little with the new ideas she introduces to him.  There is light and shade in the book – some very funny bits with Cordelia matchmaking with Lieutenant Kudelka and Drushnikovy (as I have only listened, I have no idea if I have spelled their names correctly or not.  Perhaps someone can enlighten me?).  I admit I had to get a spoiler from a friend because I was a bit concerned about where the story was  going and one blurb refers to “personal tragedy” for Cordelia.  Rest assured, there is a HEA.   I don’t think I could have borne it otherwise.  Until I got my spoiler-y answer, it did actually adversely affect my enjoyment of the story.

This is a tighltly plotted,  intricate story, delivered in fine style by Grover Gardner.  He doesn’t do a female character voice, but his character delivery is otherwise superb.  He completely deliver’s Cordelia’s wry humour and sometimes self-deprecating internal monologue.  He does do character voices but he doesn’t attempt a female voice.  His already deep voice goes even deeper (and with the flatness described in the text) when he playing the part of Serjeant Bothari.  And it was fairly easy to pick who was talking just from the way Gardner delivers the lines.

I loved this so much, that even though many other books in the series aren’t romance at all, I’m going to listen to them all.  I have already downloaded Falling Free (which was published after Shards of Honour but takes place, chronologically, beforehand) and the next two books after Barrayar.

Tagged with: Lois McMaster Bujold
Posted in: A reviews, audiobooks