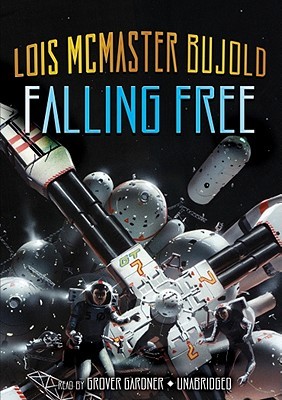 Why I listened to it: Having enjoyed Shards of Honor and Barrayar so much, I decided, whether or not any of the other books had a strong romantic thread (or any) I was going to listen to the rest of the series.  I decided to start at the beginning – Falling Free was written after Shards of Honor but is chronologically the first book in the series.  There are no Vorkosigans in the book, but apparently the author recommends starting here.
What it’s about: (from Goodreads)  Leo Graf was an effective engineer…Safety Regs weren’t just the rule book he swore by; he’d helped write them. All that changed on his assignment to the Cay Habitat. Leo was profoundly uneasy with the corporate exploitation of his bright new studentstill that exploitation turned to something much worse. He hadn’t anticipated a situation where the right thing to do was neither save, nor in the rules…

Leo Graf adopted 1000 quaddies now all he had to do was teach them to be free.

What worked for me (and what didn’t): I hadn’t even read the blurb for this one. So, the “quaddies” and the whole set up was a bit of a shock.  Essentially, the quaddies are a genetically engineered human species, designed to be perfectly adapted to life in freefall (zero gravity).  They have no need of legs.  They have four arms instead.  They can cope with a lot more radiation than a “normal” human and for a variety of reasons, represent a huge potential saving to the company “Galactech” – they don’t need to send the quaddies to 1G atmosphere for 1 month every 3 months – no transport costs, no wages, no employee benefits.  Because the quaddies aren’t regarded as human.
Leo, from whose (3rd person) POV most of the story is told doesn’t think of them that way (thank God or I would have hated him).  But the story does raise interesting questions about what is humanity, about genocide, slavery and corporate disinterest and greed – both of which can only mean disaster for the quaddies.
The commander of the space station on which the quaddies live calls them “chimps” but is still prepared to have sex with the (older) females.  Big of him.  Those parts were very uncomfortable for me.  He is a bad man, a greedy, power-hungry, ambitious man, but the way he is portrayed both vocally and in print, is that he honestly doesn’t see that the quaddies are people deserving of freedom.   Even some of the other people in positions of authority are “nice” people but they also think of the quaddies of something… less.    Obviously the book is saying something about our human society’s history – a history which doesn’t feel all that far away at times.Leo initially doesn’t want to rock the boat.  It’s not his place.  He’d risk his pension and any career advancement.  But eventually, it is too much and he has to act.     What I liked most about him is that he didn’t replace one dictator with another, merely more benevolent one (ie himself), he made suggestions and yes, he took the lead in some areas where he had expertise, but he didn’t make decisions for the quaddies.  They had to do that for themselves.There is a smidge of romance in the story which was satisfying (I’m always happy to see some romance) but the book is really about humanity, what it means and freedom and, possibly, what that means too.It is an adventure story which had me holding my breath in places, terrified something awful was going to happen.  (As it was not a romance, I did not have genre conventions I’m familiar with to hold my hand).The narration was superb.  Gardner obviously read and understood the text before he started production. This might sound like it should be obvious but it actually isn’t.  In novels there are plenty of sentences where the tone/attitude/emotion is written down after the words are said.  Gardner never gets it wrong.  I don’t know how many times I’ve heard a sentence rendered and then realised it was completely wrong by the “he said sadly” at the end (as an example).  Not only that (although that it something I appreciated very much), he imbued his voice with the characterisations.  The female characters don’t have “female” voices – they are his voice, subtly changed to demonstrate personality, slightly softened perhaps to indicate gender.  It took a little bit of getting used to in Shards of Honor but once I was on board, I was fully prepared to ride that train all the way.  Knowing what to expect going into Falling Free, in terms of narration, it took no time at all to settle in an enjoy the ride.

What else?  I’m not sure when/if the quaddies appear in the Vorkosigan saga down the line (I must stop with the train metaphor!).  Like I said above, there are no Vorkosigans in this book.  I think it can easily be read/listened to as a stand alone.  I can’t say whether it is necessary to understand the series, but I’m leaning toward not.  That said, it was a great listen and absolutely worth my time regardless of series links.