The Gamble by Kristen Ashley 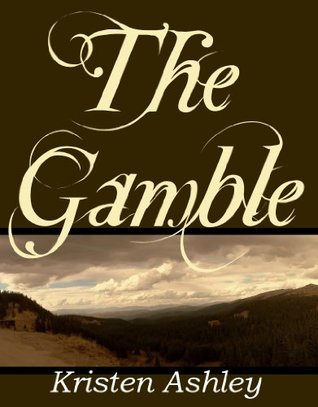 Why I read it:  I liked Sweet Dreams so much I bought the rest of the books in the series and started at book 1.
What it’s about: (from Goodreads)  Nina Sheridan’s on a timeout adventure in the Colorado Mountains. She needs distance from her clueless fiancé, distance to decide whether she wants to spend the rest of her life with a man who doesn’t care enough to learn how she takes her coffee.Arriving in a blinding snowstorm at the A-Frame she rented, she comes face to face with the most amazing man she’s ever seen. Minutes later, when he kicks her out of his house, she goes head to head with him.Beyond angry because she’s flown half a world away to start her timeout adventure, not to mention her sinuses hurt, she heads back down the mountain and ends up in a ditch. Unable to extricate herself, she gives up, hopes for rescue and falls asleep in the backseat.The next morning she wakes up in the amazing man’s bed and she’s sick as a dog.Holden Maxwell spends days nursing her back to health and then he spends the next two weeks trying to convince her to take her Colorado adventure further, in other words, make it permanent and take a gamble on him.

Nina has a tough time fighting her attraction to Max, especially when it seems all Max’s friends, her mother and stepdad and the whole town want them together and both she and Max get embroiled in the murder of Max’s ex-friend and the town of Gnaw Bone’s most detested resident – a man everyone has motive to kill, especially Max.

What worked for me (and what didn’t):  I’m a big fan of the main characters in a romance spending a lot of time together.  I like it when they meet very early in the book and I don’t like long separations.  There are exceptions to every rule of course but I think one of the reasons that the Kristen Ashley books I’ve read so far have worked for me, is that her main characters get together on the page very quickly and if there are any separations, they are short.  Nina and Max, spend a lot of time together in this book.  It is a fairly long book and they get a lot of page time.  There is a lot of dialogue and I got a good handle on Max, notwithstanding the book is almost completely from Nina’s 1st person POV.
The set up perhaps needed a little bit more suspension of disbelief than the usual but I was happy enough to go with it.Nina is American but has spent some years living and working in England and she has the idiom to prove it.  Max calls her “Duchess” because she is classy and she has an accent (the latter of which Nina denies of course).   I’ve read books by US authors before which don’t get the British-isms right – so it’s worth noting that it wasn’t the case here.  For the most part, it was seamless and accurate (although sadly, there was no use of “pillock” or “minger”).Nina is funny.  Her inner narrative is funny.

Maybe he got tired of waiting and he’d gone without me though I doubted this was the case and decided he was probably doing something Max-ish. Chopping wood. Building a barn. Saving a child in distress or climbing a tree to rescue a cat. Stuff like that.

Even when Nina is distressed about something, the way she thinks in her head is amusing and it serves to lighten the tension.

In fact, I did want to crawl into a bed, pull the covers over me, shut out the world and anyone who could get in and hurt me and I wanted to sleep. Sleep for decades and wake up a spinster, go to the nearest shelter, adopt two dozen cats and then live my life cleaning up hair balls and watching Wheel of Fortune. That seemed like a happy life to me.

Nina’s mother is a hoot too – you can easily see where Nina gets it from and the interaction between them is hilarious.

“I’m in the mood to concoct something,” Mom answered and my entire body got tense.

“Mom –” I started and Steve was with me for he said in a low, warning tone, “Nellie, not sure that’s a good idea.”

“My concoctions are the best,” Mom declared in Steve’s direction.

“Your concoctions are hit and miss. Mostly miss,” I told her. Mom whirled on me, aghast.

“You loved my blueberry, rhubarb soufflé.”

Max’s body started shaking against mine but I was forced to ignore it when Mom emitted an outraged gasp.

Like many Ashley heroes (at least in my experience so far) Max is fond of the one word sentence, usually consisting of “Babe”.  I appreciated Nina pointing out to Max that this is not a statement full of clarity of meaning.

“Babe,” he replied, grinning then said no more.

Still being helpful, I explained, “I know you think that word speaks volumes but, I have to tell you, it actually doesn’t.”

Max gives good apology.  He has moments of being a dick but, after he calms down, he can and does recognise and take responsibility for his dickishness – even about such a touchy subject as money.  This is how an apology is done.  No excuses, no “mansplaining”.  Heroes, please note.

“You were right, honey.”

With my history with men, most specifically Niles who never listened to me, I found I was unable to process his words.

His fingers slid out of my hair and his hand went down, also under the shirt, and both of his hands were now traveling soothingly along my back.

“You were right. I was wrong.”

Did he just say that? Did Macho Mountain Man Max straight out admit he was wrong?

When Max isn’t wrong however, he keeps going.  And Nina and Max argue. A lot.  it’s part of the fun of their relationship.

“Explain somethin’ to me, babe, why is it you always wanna stop talking when I’m winnin’ the fuckin’ argument?”

I decided to be honest. “Because you’re more annoying when you’re right than you are just normally.”

While in real life that kind of bickering would make my head explode and then keep me rocking in the corner (my husband and I are very sympatico and our home is very peaceful, which I LOVE), it is fun to read about relationships like this in fiction.  And, with an example such as this one, I can (sort of) see the attraction.

Max’s hassled eyes went over my head and I knew he was looking at Norm when he stated, “She’s up five minutes and we’re fightin’. Our first date, she fought about how Germans invented beer.”

I turned again in his arm, looked at Gladys and announced, “He has the memory of an elephant which you would think is good for, say, anniversaries and birthdays and such, but day to day?” I shook my head and concluded, “It’s very, very bad.”

The conversational style of the narrative, and its humour, is continued even in the sex scenes (which are hot and sometimes in a visceral way – Max isn’t much of a dirty talker but he’s not afraid to ask for what he wants and his language is typically direct and blunt).  And Nina’s thoughts are what I think many women may think in such circumstances.

Then he somehow maneuvered me so I was straddling his face but was facing his hips.

“Wrap your mouth back around me, Duchess,” he growled from between my legs before I had time to come to terms with my position which under normal circumstances this early in a sexual relationship might be a little daunting. But I felt the vibration of his words between my legs and I liked it a lot. Enough to forget to feel daunted.

Nina has had bad luck in the romance (or men in general actually) department and has some self esteem issues that hold her back.  Max is unlike anyone she’s ever met, but she is threatened by his first wife, who various townsfolk tell her he deeply loved.  For those readers who long for a second chance at love story which does not demonise the first wife in order to make the second one look good, this is a very good example.    The resolution was partly Nina settling into her place with Max and realising she belonged there, partly Max explaining some things and partly was left unaired (in my opinion – mainly in that Nina didn’t push for an answer to “do you love me more?” type questions) but the long and short of it was that Max loved Anna but she died.  He’s a different person now and Nina is the one he wants to be with.  And it takes a while, but in the end, Nina believes him.

The suspense part of the story was the weakest, with the plot being convoluted and improbable.  But, the romance was plenty satisfying for me.

What else? The other thing I wanted to mention is the wonderful friendships which are portrayed in this book.  There is space (not too much but plenty) given to Nina’s developing relationships in Gnaw Bone – her welcome from the townsfolk and her feeling of being at home there, the career opportunity there etc, all served to add depth to the story.  Nina’s happiness was about more than her relationship with Max.One of the young female characters in the book has been raped (it all happens off page and there are no details about it at all in the book) and Nina’s relationship with Mindy and her efforts to help Mindy heal and move on were special.  I cannot express how much I love that there are fully developed characters in these books who are there to add to the story (and they do) but they are not sequel bait and will not ever get their own books.  There is a real sense of community in the book and watching Nina fit into and create her own niche within that community was one of the joys of the books.  And, for me as a reader, knowing that the characters were all there for this book and no other reason, was the cherry on top.Ashley has writing tics that some people won’t like.  She spends a lot of time describing furniture and the layouts of buildings, including what knick-knacks are or are not present.  Sometimes I skim over those descriptions.  But, there is something about it that works for me and I’d rather have it there than not.  There were a very few typos and no doubt some grammar errors too, but overall, I found it fairly clean – the long convoluted sentences and the detailed descriptions are part of her style.  I’m kind of surprised, but I’m mostly enjoying it.  And, when I don’t, I can easily skim over the description of the carpet or the staircase.  Partly because of all that description though, there is a strong sense of place and it is obvious that Ashley has a very clear picture in her mind of what she is conveying to the reader.  And, I think, there is something good about that.  The places and people do feel more real to me this way.  I can totally see what Angela James was talking about on Twitter when she talked about Ashley needing only light editing.  Take too much out and it wouldn’t be Ashley anymore.
Grade:  B+/A-

Tagged with: Kirsten Ashley
Posted in: A reviews, B reviews