One Dance with a Duke by Tessa Dare, narrated by Leslie Bellair 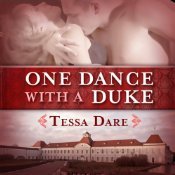 Why I listened to it: I picked up book 2 and 3 in the trilogy on sale recently but they’d ran out of book 1, so when I saw this cheap at Audible I decided to take the plunge.
What it’s about: (from Goodreads)  True temptation begins at midnight…A handsome and reclusive horse breeder, Spencer Dumarque, the fourth Duke of Morland, is a member of the exclusive Stud Club, an organization so select it has only ten members — yet membership is attainable to anyone with luck. And Spencer has plenty of it, along with an obsession with a prize horse, a dark secret, and, now, a reputation as the dashing “Duke of Midnight.” Each evening he selects one lady for a breathtaking midnight waltz. But none of the women catch his interest, and nobody ever bests the duke — until Lady Amelia d’Orsay tries her luck.In a moment of desperation, the unconventional beauty claims the duke’s dance and unwittingly steals his heart. When Amelia demands that Spencer forgive her scapegrace brother’s debts, she never imagines that her game of wits and words will lead to breathless passion and a steamy proposal. Still, Spencer is a man of mystery, perhaps connected to the shocking murder of the Stud Club’s founder. Will Amelia lose her heart in this reckless wager or win everlasting love?
What worked for me (and what didn’t): At first, I wasn’t sure I was going to be able to get through this one.  The narrator is new to me and feels very inexperienced.  A search on Audible (even with my geo restrictions) shows however she has 22 audiobooks dating back to at least 2010.  As the book progressed however, Ms. Bellair did improve her expression, but there was never a true “hero” voice.  He spoke more sternly than the heroine and that was about it.  There was definition between the female characters but the male voices were fairly universal and I relied solely on dialogue tags and context because the voices were no clue.
I don’t know if Ms. Bellair is a native Brit or not but she had an unusual accent.  Her “or” sound (as in “caught”) was a short “o” and so, “audible” was “oddible” and “taut” was “tot” and it took me a while to work out what a “hottie head toss” was.  Apart from that, her voice was pleasant to the ear and she seemed to improve as the listen went on, adding more expression and characterisation to the performance.  I can’t say I will be in a rush to listen to her work again, but if there is a book I particularly want to listen to and she’s narrating, I could manage.
In terms of the story, it’s a little improbable in places – Spencer’s reasons for spending what, in today’s terms, is hundreds and hundreds of thousands of dollars on tokens to the Stud Club was, thin to say the least.  It may have been sentimental but surely he’s a better businessman than that?  Amelia was wilfully blind in relation to her brother Jack, who needed a good kick up the rear rather than constant handouts and it took a REALLY LONG TIME for her to GET IT.
Overall however, it was cute and fun and I liked how Amelia is not pretty or beautiful but Spencer sees her attractions and loves her completely and as a result, sees her as more physically beautiful than she is.  I gather Amelia is one who sparkles when she’s happy.  So other people begin to notice her too, which, as a fellow wallflower, is always nice to see.
I’m sure there are plenty of historical mistakes/exaggerations – did all that many duchesses bake their own bread? – and there’s nothing particularly striking in the book but it’s a pleasant enough way to pass the time.  I imagine it would have been better in print because the hero would have sounded more like a man in my own head instead of a stern female.

2 comments on “One Dance with a Duke by Tessa Dare, narrated by Leslie Bellair”