Wayward One by Lorelie Brown 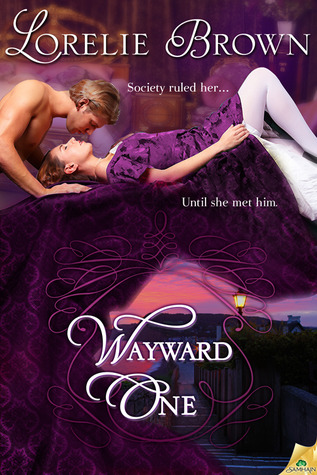 Why I read it:  I received a review copy from the author.
What it’s about: (from Goodreads):  He’ll protect her with every vicious bone in his body.During her ten years at the prestigious Waywroth Academy, Sera Miller clung to a strict code of propriety to shield herself from rumors that she isn’t an orphan at all. She’s a bastard. Now she wishes she had never allowed her friends to talk her into snooping into the mysterious source of her tuition.Her benefactor isn’t the unknown father she dreamed of one day meeting, but Fletcher Thomas—underworld tycoon, gambling den owner, and a man so dangerously mesmerizing that he could spark the scandal Sera has worked so hard to avoid.

Fletcher is only two steps away from leaving the life of crime he inherited from his father. First he plans to join an aboveboard railroad consortium, then claim the one thing his ill-gotten gains have kept safe all these years—Sera.

With every wicked caress, Sera fights harder to remember society’s rules and reject the painful memories his touch resurrects. Accepting Fletcher’s love means accepting her past—a risk too great for a woman who has always lived in the shadows. No matter how safe she feels in his arms.

What worked for me (and what didn’t):I liked the idea of this book but the reality turned out to be less than I had hoped.  My main issue was that Fletcher had decided that he would marry Sera when she was 11 and he was 17.  At that age, it wasn’t quite so distasteful I guess, but the book commences 10 years later, when Fletcher sees Sera again for the first time since he sent her (anonymously) to school.  So he’s now 27 and his image of her is as an 11 year old girl and he plans to marry her.  And that was kind of icky to me.  Sure Fletcher finds the 21 year old Sera very attractive but at least up until the halfway point of the book, he repeatedly reflects back on his longstanding plans.  It would have worked better for me if he had’ve thought something like – “I thought I’d marry her when she grew up but now that I’ve seen her and it’s not just an abstract idea, I reckon I’m a genius”.  But instead, Fletcher kept harking back to his plans, plans he made with Sera was only a child and, as unfair as that maybe, it did give me the icks. Fletcher is a criminal trying to go straight.  His desire is to be respectable and his plans for Sera were (in retrospect) more about gaining his respectability than lust (lust – and later, love – were just happy bonuses).  Sera is an orphan with an unknown benefactor, who is extremely conscious that she must stick to all the rules of propriety at all times because he background renders her suspect in society.  Nevertheless, when Fletcher advises her that she is to be given a significant financial endowment so she will not have to work (his plans are 2 years away from fruition) she takes the somewhat extraordinary step of moving in with him (insisting on an old relative to be present so she can ostensibly be a paid companion).  She will help him with etiquette lessons and to remodel his gaudy house so that he will be more readily accepted in society.Those bits felt like an excuse to get the characters together in close quarters.  I will admit the first half of the book didn’t capture my attention well, but things really picked up in the second half.  Sera and Fletcher’s interactions, particularly once they were in the same house were fun and sexy and enjoyable.  And, there was an event which surprised and pleased me and which meant the conflict between the couple became more about Sera’s idea of what is “right and good” and Fletcher teaching her that what’s between consenting adults is nothing to do with propriety at all.

The villain of the piece was fairly one dimensional and obvious and that subplot didn’t add much to the story in my opinion.  Happily, Sera was able to assist Fletcher even more than they had thought, by unexpected means.  I seem to be an outlier I’m afraid, but this was just okay for me, the enjoyment of the second half of the book balancing out my lack of interest at the beginning.