Mad About the Boys by JL Merrow and Jo Myles – B  This anthology is a collection of 1 new and 4 previously published short stories featuring m/m/f romance (which is my favourite kind of menage story).   Dinner for Three (Merrow) is a wonderful start to the anthology, a contemporary about two happily coupled guys who are interested in expanding their relationship to include their oblivious housemate Claire – I could happily have read a full length novel about this trio.  Because of the very short word count, the characterisations are necessarily very thin and the story doesn’t take us beyond one day of encounters.  What there was however was so very engaging, I was sad when the story ended – I really wanted more.

In the Greenwood (Myles) is a paranormal fairy tale of a wood sprite who brings two men together and then manages to become real – again, this story suffered a bit from the short length but it’s fairy tale quality meant that a certain air of unreality was to be expected and made the story work better than it would have otherwise.The Antithesis of Magic (Merrow) is about a man with no magic in a world full of magic users, who finds he is the perfect third for a fairy and a werewolf who need him.  I wasn’t clear exactly on why Gus was needed and there wasn’t really any relationship between the three so it was the least satisfying in terms of romance.  If it had been expanded to a longer story so I could see a courtship/developing relationship, I would have enjoyed this much more because the set up and the tone of the story was great.   Changeling (Merrow) Another fairy tale type story, this was a lot more successful for me.  The connection between Meg and Adam/Thistledown was apparent and, I felt the characters were more developed. Certain character-types were representative/short cuts, but this works in a fairy tale so that’s not a criticism – rather a clever use of the style.

Kiss Mark Two (Myles) This contemporary story was a delight and, in my opinion, the best of the book.  Like my other favourite, Dinner for Three, it is a contemporary, but this time it is an m/f couple who hook up with his best friend.  Like the first story in the anthology, I could happily have read a whole novel about them, but the story did feel remarkably complete for all of the short word count.  I enjoyed the tone and the characters very much. I think I’d quite like a friend like Ruby.

All in all, the anthology was a lot of fun and perfect for when you’re time poor or perhaps having trouble deciding what to read next.

I have a review coming up of Tea for Three by Anne Douglas and I’m reading the sequel to Strawberries for Dessert, Fear, Hope and Bread Pudding by Marie Sexton at the moment.

The Dream Hunter by Laura Kinsale, narrated by Nicholas Boulton – B+/A – I reviewed this one for AudioGals here.  It’s possible that Nick Boulton has the sexiest voice in the known universe. But there’s so much more to him than that.

A Woman Entangled by Cecilia Grant, narrated by Susan Ericksen – B/B- I reviewed this book for AudioGals.  Go here to see what I thought. 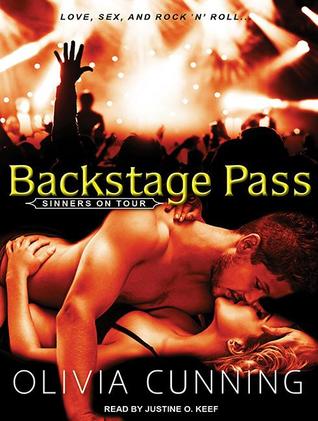 Backstage Pass by Olivia Cunning – B  I reviewed this one for AudioGals too.  Oh my lordy lordington, there was a lot of blushing.

Links
Here’s what you may have missed:
Hotter Than Ever by Elle Kennedy
Eleanor and Park by Rainbow Rowell
Power Exchange by AJ Rose
A Witch’s Handbook of Kisses and Curses (audiobook)
The Story Guy by Mary Ann Rivers
Making it Last by Ruthie Knox
Lick by Kylie Scott
Interview with Kylie Scott about sexy Groupie Kaetrin (this is a Must Read)
After Hours by Cara McKenna
In the Arms of the Heiress by Maggie Robinson
The Vor Game (audiobook) by Lois McMaster Bujold
Unsticky by Sarra Manning
Curveball by Charlotte Stein
Agony/Ecstasy anthology
Plus I had a reviews up at AudioGals of Anne Gracie’s The Autumn Bride, at Dear Author of Charlotte Stein’s Make Me and ARRA of Whiskey Beach by Nora Roberts.I also did some bad maths (sorry Kat!) when I discussed the Bell Curve of the HEA.