After Hours by Cara McKenna 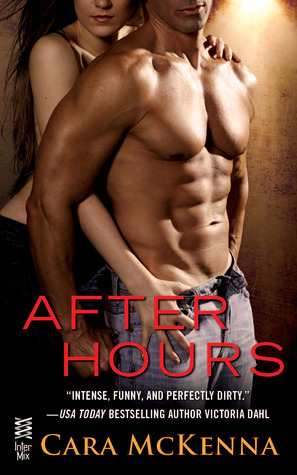 Why I read it:  I bought this book as soon as it came out but have only now got to it.
What it’s about: (from Goodreads)  A dangerous infatuation with a rough and ready man…Erin Coffey has been a nurse for years, but nothing’s prepared her for the physical and emotional demands of her new position. Needing to move closer to her dysfunctional family, she takes a dangerous job at Larkhaven Psychiatric Hospital, where she quickly learns that she needs protection—and she meets the strong, over-confident coworker who’s more than willing to provide it.Kelly Robak is the type of guy that Erin has sworn she’d never get involved with. She’s seen firsthand, via her mess of a sister, what chaos guys like him can bring into a woman’s life. But she finds herself drawn to him anyway, even when he shows up at her door, not eager to take no for an answer.

What Erin finds even more shocking than Kelly’s indecent proposal is how much she enjoys submitting to his every command. But he can’t play the tough guy indefinitely. If they want to have more than just an affair, both will have to open up and reveal what they truly need.

What worked for me (and what didn’t): My reading mojo has been missing the past week or so.  I can’t really explain what happened.  I tried about 6 or 7 books and only got 10-20 pages in before switching to something else because I wasn’t feeling it.  In the end, I picked up this one.  I enjoyed the book but I feel, in a case very much of “it’s not you, it’s me”, I may have enjoyed it more had I been on a reading high at the time rather than in somewhat of a slump.  I found myself entirely engaged when reading but not inspired to pick the book up after having had to put it down for some reason (dinner, bed, etc.). Last week, books in general weren’t doing it for me I’m afraid. So: all the caveats – if you read it at the right time, you will probably enjoy it even more than I did.  Moving on.Kelly Robak isn’t the usual romance hero.  He’s rough looking – he’s a bruiser and he looks it.  He’s got scars tracking through his very short hair and scars on his body and arms, from all the fights he’s been in as a bouncer, prison guard and orderly at Larkhaven mental insitution.  He’s tough and cold, impassive and hard to read.  When he’s at work at least. Outside of work it is a little easier, but it takes Erin a while to break in behind his defences and see the real man.  He lets his passions out in bed (and in the shower and on the kitchen counter, etc) but he keeps things very compartmentalised.  He doesn’t expect a relationship, doesn’t think he’s cut out for it.

Erin, for her part, is fairly instantly attracted to Kelly but she mistrusts that feeling for a number of reasons – the main one being that he’s the opposite of the guy she’d usually go for (someone “safe”) and too much like the losers her mother and her sister date/d – at least on the surface.  But, as it happens, the surface is pretty much the only place there is commonality with Kelly and those men.  Kelly is honorable, self-aware and kind beneath a gruff surface and, while he is strong and touch, he has no wish to get violent (except in a mildly BDSM consensual way) with Erin or any woman.

Kelly’s proposition to Erin is basically a weekend of no holds barred sex – where he calls the shots but she has the power of veto.  He wants to let his toppy side out to play. That doesn’t mean there’s nothing in it for her however.

“You think that when I say I like getting whatever I want, that a woman’s pleasure isn’t one of those things?”

Kelly has an amusingly simple philosophy on love and relationships

“There’s four things a real man has to be able to do for a woman.”

“Exactly how many man-lists do you have?”

He let my wrist go and ticked the items off on his fingers. “Fix her car. Grill her a steak. Kick the ass of any guy who makes her cry. And fuck her so hard she wakes up half-crippled.”

Suffice it to say that Kelly ticks all the boxes in this book. 😛

Erin, against her own better judgement, takes Kelly up on his offer.  She knows if things between them are any good, she’s going to get her heart broken but she thinks the trade off of potentially earth-shattering sex (which she’s never had before) is worth it.  There’s also the complication of them working together – but here, Kelly’s compartmentalisation skills work very much in their favor.

Part of the story is Erin stepping out of the role of caregiver to her grandmother and sister.  She learns, through the course of the book to step back a little from her sister’s life and let her make some of her own mistakes.  She will always be the over-protective sister, but she makes a deliberate decision to not pick up the pieces very time – even so much as making sure she searches for a 1 bedroom apartment so that her sister can’t move in – it’s something she’d do and Erin would let her.  But, Erin also steps into her career, one ripe with future possibilities.  For the first time she feels she’s “earning her way” rather than merely “surviving”.

Erin makes some mistakes with Kelly – prying where she’s not been invited and this derails their relationship (or whatever it is) for a time.  But, because, at heart, Kelly is the honourable type, he’s there for Erin when she needs him – and thus illustrates once again the differences between him and the sleazy men Erin’s sister are drawn to.

It was nice to read a story about two ordinary working people – no billionaires in sight here. The problems experienced by Erin and Kelly seemed authentic.

The book ends on a hopeful HFN which I thought fit the story well.  I think this pair can make it together but I was glad the book didn’t try to force the exchange of “I love you” and a full on HEA – it was too soon.   I think the ending made the romance more satisfying than less.

It was a good book and if I had been in a better reading frame of mind, I’m sure I would have been even more engaged than I actually was.

“I changed your oil and rotated your tires.”

I tried my best to sound exasperated. “You didn’t have to do that.”

“Course I didn’t.” He grabbed his mail and unlocked the door, flipping on the lights as he stepped inside. “That’s what makes me so dreamy.”

2 comments on “After Hours by Cara McKenna”