In the Arms of the Heiress by Maggie Robinson

*NB This review first appeared in the July ARRA newsletter – so the format is slightly different and it’s also shorter than usual.* 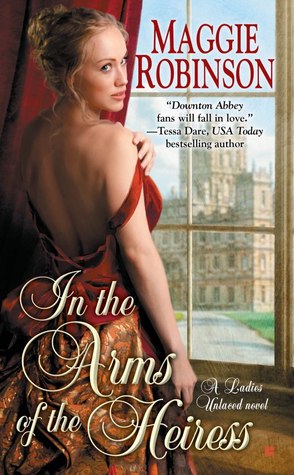 There aren’t many historical romances around set in 1903 so when I got the chance at an early copy of this book (which is now out), I jumped at the chance.  Louisa Stratton is the heiress of the title.  Her parents died when she was a child and she was raised by her Aunt Grace – a cold woman whose motives are murky – even when Grace is being kind, she is more cruel than anything.  After inheriting her fortune at age 25, Louisa escapes with her maid, Kathleen, to the continent, to get away from her awful family.  After a “indiscretion” with a local landowner at age 17, Louisa’s activities have been much curtailed and she’s been a virtual prisoner at the family estate, Rosemont.   A year after her “escape”, she discovers some oddities in her finances and receives reports that her aunt is very ill.  Against her own desires, she decides she needs to go home for Christmas and check on things.  There is a problem though.  To stop Aunt Grace from fussing, Louisa has told her family she has met and married one Maximillian Norwich – a man whose perfection is only eclipsed by the fact that he doesn’t exist.
Mrs. Evensong, a rather mysterious woman who runs an employment agency and seems to have a knack for solving problems and matchmaking, locates Captain Charles Cooper, a man suffering from PTSD after serving in the Boer War in Africa, to play the part of Max for a month.  In pretending to be married, Louisa and Charles find opportunities for indiscretions of their own and along the way, they fall in love.
Louisa is flighty, she talks all the time, she loves driving her motor car (albeit that she does it very badly) and she is also an early adopter of feminism and the suffragist cause.  She makes for quite a delightful heroine.  Charles/Max came from very humble beginnings but was elevated by the factory owner who employed the rest of his family and sent to Harrow and thence to the Army as an officer.  Charles’ experiences in the War are touched upon and I would have liked to have this more fully expanded actually.  But those aspects of the story are very serious and sad and don’t really fit well with the light-heartedness that is Louisa and the rest of the book.
I did love the early 1900s setting and those bits for me were the best part of the book.  The rise of the motorcar, early suffragettes, women working and the way Louisa wasn’t at all class conscious.  Louisa and Charles were fun together too and I very much liked how Louisa was frank in her desire for Charles and not at all shy to take the lead in intimacy.  Ultimately, I think the book tried to be too many things – a mystery, the farcical aspects of Louisa and Charles’ deception and relationship, the seriousness of Charles’ PTSD, the complicated relationship between Louisa and her family and the book felt a little disjointed for me.  Louisa is a delightful character however and I was happy to see her well settled with Charles at the end – and surrounded by people who love listening to her talk!
Grade:  C+
BUY IT:
AMAZON     BOOK DEPOSITORY