A Witch’s Handbook of Kisses and Curses by Molly Harper, narrated by Amanda Ronconi 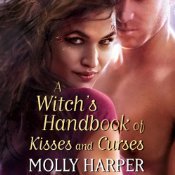 Why I listened to it:  I have enjoyed all of the Jane Jameson/Half Moon Hollow books on audio and picked this one up at Audible when it was released.
What it’s about: (from Goodreads):  Nola Leary would have been content to stay in Kilcairy, Ireland, healing villagers at her family’s clinic with a mix of magic and modern medicine. But a series of ill-timed omens and a deathbed promise to her grandmother have sent her on a quest to Half-Moon Hollow, Kentucky, to secure her family’s magical potency for the next generation. Her supernatural task? To unearth four artifacts hidden by her grandfather before a rival magical family beats her to it.Complication One: Her grandfather was Mr. Wainwright and the artifacts are lost somewhere in what is now Jane Jameson’s book shop.Complication Two: her new neighbor, Jed Trudeau, who keeps turning up half naked at the strangest times, a distraction Nola doesn’t need. And teaming up with a real-life Adonis is as dangerous as it sounds, especially when he’s got the face of an angel and the abs of a washboard—can Nola complete her mission before falling completely under his spell?
What worked for me (and what didn’t): To be honest, I nearly quit this one about 10 minutes in. I usually enjoy Amanda Ronconi’s narration but her accent for the narrator and main character, Nola, was putting me off.  I persisted, in the hope I’d get used to it.  Fortunately, by the middle of Chapter 3, it was explained that Nola’s accent was a horrid mashup of Boston and Ireland and maybe something else.  And you know what? That’s exactly what Nola’s accent sounded like.  I thought it was Ms. Ronconi doing a really bad Irish accent.  But I did her a disservice when I thought that – she actually voiced the character as written – it’s just that it’s not written right at the beginning of the story so it was a little hard to understand at first.  When there were Irish characters, Ms. Ronconi did a fine Irish accent.  I can’t say I’m sorry that the Boston dropped out of Nola’s accent for the most part by the latter part of the story.  It did sound a bit like Ms. Ronconi’s teeth were clenched and that can’t have been comfortable.
Once I settled the accent issue, I was happy to enjoy the story, which included the trademark Half Moon Hollow hijinks and the usual cast of characters – Jane and Gabriel (and now Jamie), Dick and Andrea, Zeb and Jolene, et al.  Jane and Dick in particular tend to scene stealing but they’re so funny that I never mind that.Nola Leary heads to the Hollow to locate four “elements” required for a magical ritual on the Summer Solstice (which is the Winter Solstice where I come from BTW).  The items were left in the care of Mr. Wainwright, who turned out to be Nola’s grandfather – though he didn’t know it when he was alive and Nola herself has just found that out.While she is in the Hollow looking for the items, she makes friends with Jane and her crew and falls for the sexy (and often shirtless) next door neighbour, Jed Trudeau.  This is somewhat complicated by the presence back in Ireland of Nola’s boyfriend, Stephen.  By the time Nola and Jed get up to anything she and Stephen had technically broken up (plus there are other revelations later), so for those bothered by cheating, I think it gets a pass here.Jed has secrets of his own and through the course of the investigation, these come to light and Nola proves her prowess with a shovel.It’s funny and kooky and light hearted even though there are some darker subjects touched upon.  Those who are familiar with the series will know that Dick was Mr. Wainwright’s great-great-and-a-few-more-greats-grandfather so Dick is overwhelmed when Nola turns up and he realises he has a great-great-several-more-greats-granddaughter to love and skeeve out (which mostly happens when Nola thinks Dick is a pervy stalker with an inappropriate interest).

I liked the story very much.  It doesn’t pretend to be anything more than it is.  It doesn’t take itself too seriously and it’s a lot of fun.  I really enjoy the Hollow and its inhabitants and I’m only too happy to visit when there’s a new book out.

Amanda Ronconi does her usual excellent job of narration, nailing the characterisations and the humour and the camerarderie of the group.  And, once I got over the accent (well, once I understood that the accent was on purpose and fit the text) I enjoyed the listening experience very much.

Tagged with: Molly Harper
Posted in: audiobooks, B reviews