Making it Last by Ruthie Knox 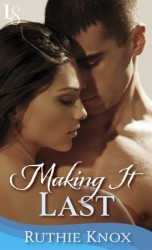 Why I read it:  I received a review copy from the publisher via NetGalley.  I read and enjoyed How to Misbehave a while back (this marks the start of Tony and Amber’s relationship) and I have the other two Camelot books on my TBR.  But I am a sucker for marriage in trouble stories so I decided to read this one out of order after being assured by the author that doing so wouldn’t spoil the other books. I don’t think it’s absolutely essential to have read How to Misbehave first but I do recommend it.
What it’s about: (from Goodreads)  A hotel bar. A sexy stranger. A night of passion. There’s a part of Amber Mazzara that wants those things, wants to have a moment — just one — where life isn’t a complicated tangle of house and husband and kids and careers. Then, after a long, exhausting “vacation” with her family, her husband surprises her with a gift: a few days on the beach . . . alone.
Only she won’t be alone long, because a handsome man just bought her a drink. He’s cool, he’s confident, and he wants to take Amber to bed and keep her there for days. Lucky for them both, he’s her husband. He’s only got a few days in Jamaica to make her wildest desires come true, but if he can pull it off, there’s reason to believe that this fantasy can last a lifetime.
What worked for me (and what didn’t): It has been 14 years since the events of How to Misbehave.  Tony and Amber now have three sons, the youngest of whom (Jake) is 6 and has recently started school.  Tony is working 80 hour weeks and far from home because the housing industry is in the toilet – he’s gone by 5.30 and doesn’t get home until around 10 most nights.  If they’re lucky, he and Amber have half an hour to talk before they fall asleep.  Amber is feeling particularly lost and lonely – the kids are all at school, she barely sees her husband and somewhere along the way her sense of self has disappeared in what she is to everyone else in her life.  Tony and Amber still love each other but that isn’t enough.

The story starts when Amber and Tony and the boys are in Jamaica for a family wedding.  Amber’s rich aunt decides to leave early which means her fully paid up suite is available.  Tony, in an effort to make Amber smile, tells her to stay in Jamaica on her own for a few days so she can get the relaxing spa/beach holiday she had been hoping for.

As the pair spend a little time apart, they each consider how they’ve arrived at where they are, what they can do about it, what they want, what is important and what can be left behind.

It is a romance, so I don’t think it is a spoiler to give away that there is a HEA – but the problems Amber and Tony have are real, everyday and at least in some aspects, sometimes, close to home.  Every couple goes through times which are “dry” in one way or another – it’s choosing each other again – making a decision to leave what keeps you apart and to step closer to one another – that keeps things from becoming a desert where nothing blooms.

As large as the problems Tony and Amber had were, I was worried that they wouldn’t be able to satisfyingly solve them in the space provided.  The author handled this cleverly I think – with a bit of “blue skying” and definite together-intent.   And, in the end, the “fix” was kind of simple.  Not easy. But simple.

I got to spend time in each person’s head so I saw the longing Tony has for Amber and his desperation to fix things, his fear she would leave and he would be lost forever. It wasn’t at all for him about keeping the status quo or preserving the convenience of having her around – it was much more than that and that made me root for him when he set about “project get Amber back”. I saw Amber’s longing for connection and identity and her overwhelming love for her husband and children even in the midst of her unhappiness.  Frankly, I wanted to wrap them both up in a hug.

There was a little ambiguity in one scene at the resort which I choose to interpret positively (regular readers will know I’m not a fan of ambiguity) and I questioned whether Tony and Amber, in the little time they had together each day could really find the time and inclination to have sex twice a week on average even when things were at their worst.

There is a rather melancholy air about the story (but it is a different kind of melancholy than that in The Story Guy) and possibly, some people will find it lacking somehow in romance. It isn’t a joyful book.  It rather left me with the satisfied feeling like you might get after a long struggle where things have turned out well.  Tired but pleased.  Or something.   There is romance in it, and sexy sexytimes and humour too, but it is about choosing to turn toward each other rather than being inexorably drawn as is often the case in courtship stories so it has a different flavour than the usual I think.

I knew I liked it but I admit I struggled somewhat with the grade.  Because it resonated and stayed with me, I’m going with an A-.

Tagged with: NetGalley, Ruthie Knox
Posted in: A reviews

2 comments on “Making it Last by Ruthie Knox”