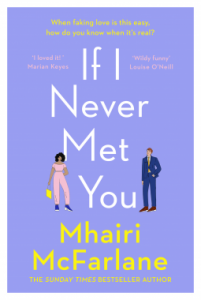 Laurie is the only POV character. This works to help obfuscate Jamie’s motivations from time to time. The reader knows instinctively that some of Laurie’s conclusions are incorrect but we don’t know for sure what’s going on until Jamie makes his big confessions well (well) into the book. However, it also serves to make Jamie very opaque as a character. We don’t know what’s going on in his head a lot of the time. The Jamie he starts the book as and the one he ends up as are markedly different and there wasn’t quite enough of a dotted line between the two for me to fully buy the change. For instance, he very openly says he’s not interested in marriage or children at the start buy by the end he’s feeling very differently. I’m not sure I was completely convinced to be honest.

My reading experience was somewhat hampered by some formatting issues with my ARC, which meant that there were times (sadly often when it was kind of critical to my understanding) when the dialogue was all mashed together and I was hard to tell which of Laurie and Jamie was saying what in a conversation. There were some parts right near the end which baffled me because I couldn’t tell what was back and forth between them line for line (and who said what) or if some bits were said by the same person. I expect those issues won’t be replicated in the final published version but as it affected my enjoyment of the story I had to mention it here.

The writing is very British, with a lot of UK-based slang. It wasn’t difficult for me to work out what was meant though – Urban Dictionary and Google were my friends every now and then. I wonder if, when it is released in the US (not until March 2020) there will be changes to the text? While it is not a romcom the humour of the book is peculiarly British too – something that works very well for me. The dry understatement is something I’m very familiar with and enjoy.

I liked Laurie very much. She’s talented, smart, generous and kind and, I gather, pretty gorgeous. When the book starts, Laurie feels old and tired and very not-hot but she comes into her own over the course of the book and gets her mojo back.

I liked the way Laurie’s ethnicity was woven into the story too. Laurie is biracial; her mother is originally from Mauritius and her father (well, sperm donor really, he’s a shit dad) is white.

For all that I wanted to know Jamie more, there were some really lovely reveals to him over the course of the book, the most notable being when they were in Lincoln and he was coping with some heavy things and leaning on Laurie. I liked the vulnerability shown and I liked that he didn’t become a jerk afterwards and get all macho and embarrassed about showing genuine emotion. I liked also that Jamie stood up for Laurie – something Dan didn’t ever really do apparently.

The black moment at the end of the book lost some of it’s punch for me – partly because of those formatting issues I mentioned but also because it was just a little bit too convoluted. I needed more information about Jamie all through the book really for it to come together smoothly for me.

What else? None of this is to say that I didn’t enjoy the book. I did. While If I Never Met You was a book I found fairly easy to put aside, it was also a book I enjoyed when I was reading it. I felt Laurie’s confusion, pain and devastation when Dan left her, I understood her struggle to pick up the pieces and her wish to make Dan see her as desirable again. I felt Jamie’s pain when [the thing in Lincoln] happened and I understood Laurie’s complicated feelings for her father. Those things all worked really well.

I am, first and foremost a romance reader however, and there wasn’t quite enough of that in this book for me. It’s not so much that there wasn’t any sex to speak of (what there was was off page and barely described) – I like non-explicit books well enough. What I’m after is the intimacy of that love relationship however it is expressed. Here, that intimacy was a little light on. Partly that was because I was limited to only Laurie’s perspective and partly it was because so much time was spent on Laurie’s own journey of healing after Dan.