Red at Night by Katie McGarry 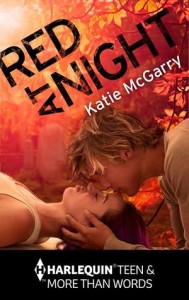 Why I read it:  I’m a fan of Katie McGarry’s books.  This book is available free from Harlequin or Amazon.

What it’s about: (from Goodreads)  In Red at Night, Stella and Jonah are total opposites. She’s the girl with purple hair from the wrong part of town. He’s a high school senior who hangs with the cool crowd. Until a car accident leaves him haunted by guilt, and Jonah starts spending time at Stella’s favorite refuge…the local cemetery.

Stella knows she should keep her distance—after all, she spent her girlhood being bullied by Jonah’s friends. Once he’s sorted out his tangled emotions, Jonah won’t have time for her anymore. Too bad she’s already fallen for him.

What worked for me (and what didn’t):  Inspired by Nikki Berta who runs the Goodie Two Shoes Foundation which provides free shoes to children in Nevada (and they get to choose their own shoes from a wide selection), this story is part of Harlequin’s More Than Words project.

Both Stella and Jonah are in their senior year of high school  Stella lives with the sometime-girlfriend of her father.  Her father is mostly absent and her and Joss (the sometime-girlfriend) are not remotely wealthy.  Joss tells Stella not to dream or hope because people like them are destined to stay where they are and college and getting out from under is for other people.

Jonah comes from a wealthy family.  He’s good looking, smart and he’s had it easy really for his whole life, until a few weeks prior when there was an accident and someone died.  It has affected him profoundly and he’s trying to put himself back together, to be a better man.

Stella and Jonah meet regularly at the local cemetery and they get to be friends.  Jonah never directly picked on her at school, but he laughed when others did and when he didn’t laugh, he stood by and did nothing.  His eyes have been opened by the events surrounding the accident and seeing Stella and the effect the teasing has on her (most particularly by his best friend Cooper), Jonah has a choice to make – will he continue to stand by?  Or will he stand for Stella? And if he does, what is the cost and is he prepared to pay it?

Mrs. Collins (from Pushing the Limits) makes an important cameo and in her special Mrs. Collins way, she encourages Stella to hope and dream in ways that are achievable and realistic but still equal getting out from under if she works hard.

It’s kind of a romance – there’s no HEA and I wouldn’t call the ending HFN either exactly – it’s more that there is a hopeful beginning… at the end.  (It makes sense when you read the book).  It was an easy read and enjoyable. Some of it felt a little… preachy I suppose (though not religious) but I liked it.  I’d like to know how Stella and Jonah get on after the end of the book – I did end up caring for the characters; something Ms. McGarry seems to be easily able to make me do.

Tagged with: free reads, Katie McGarry, novella, YA
Posted in: B reviews

3 comments on “Red at Night by Katie McGarry”