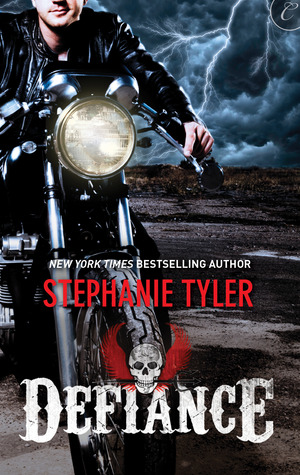 Why I read it: I received a review copy from the publisher. I like New Adult and I liked Motorcycle Man and Reaper’s Property.  I liked Beyond Shame.  So, this one, combining a motorcycle club, a post apocalyptic world and young adult protagonists looked promising.
What it’s about: (from Goodreads) Rebelling against her legacy as the MC’s princess, Tru Tennyson escaped the ruthless, male-dominated culture of the Defiance motorcycle club. Three years later, her newfound freedom is ripped away, thanks to a massive hybrid storm that killed millions. Now, in the post-Chaos world of semi-darkness and near-total anarchy where gangs rule, she discovers the dangerous world of Defiance may be the one thing that can keep her safe.Tru is at the MC’s mercy when she’s dragged back to her former home … and to the only man she’s ever pictured a future with. Caspar is the bastard son of the club’s leader, her safe haven when life got rough — and her onetime lover the night she left. When Tru refuses to trade sex for power and be claimed by a rival club leader, she also dares to announce she wants Caspar instead, throwing the MC into turmoil.Tru’s brazen revolt could start a gang war and destroy the club from within. Now both Tru and the MC must wait for Caspar’s response … and the inevitable fallout.
What worked for me (and what didn’t): Unfortunately, for me, the book didn’t live up to its promise.  I found the world building confusing and… not terribly believable and I think in the end, the author’s style just doesn’t work for me.  She is a bestselling author so there are obviously plenty of people who like her style just fine but I wasn’t as engaged as I’d hoped I’d be.
The book is set approximately two years after a series of environmental events which became known as the Chaos.  (Having just read Fire Inside by Kristen Ashley, where the motorcycle club is called Chaos, I kept getting the two terms confused but that’s not really a criticism of the book, it’s just a thing I had to deal with when reading, because Chaos means KA these days).  Anyway, back to the Chaos as it is in Defiance.

The Chaos, as it was later named, was a series of environmental destructions triggered when several meteors hit the earth. Two had landed close to active volcanoes and set off a domino effect in the atmosphere as well as volcanic eruptions. Tsunamis. Earthquakes. Wild weather, all within a week’s time, all around the earth.

A meteor is what is believed to have wiped out the dinosaurs.  My (limited) understanding, gained mainly from watching National Geographic and Discovery Channel specials, indicates that if a such an event were big enough to affect the world’s climate, the polar ice caps would melt, the sun would be blocked out and all the plants would die.  It would be bitterly cold – no sunlight = no warmth. So, pretty much, everyone and everything is gonna die, except maybe in places like Mexico (I base this on The Day After Tomorrow).  The Defiance MC members were doomsday preppers and have the patents on submarine like “tubes” which are underground.  There are also special lights – one hour spent under them equals eight hours of sunlight, so I can see how they survived.  But I didn’t quite understand how they could go outside.  In tank tops.  At least, not a mere two years after the Chaos.

There was both too little and not enough information about The Chaos in this book for me.  I think I could have bought into it more easily if I had less information than what there was.  There was enough information to make me question but not enough to satisfy.  I’m no scientist but I found it difficult to suspend my disbelief enough – the real world kept intruding.

There is some kind of satellite which breaks through the dust etc in the atmosphere and allows sunlight through and it is rationed across the world (or perhaps just North America, I wasn’t clear on this).

But the sun could, with the help of a satellite that was developed years before the Chaos, for just such an event. The satellite would break through the volcanic ash and other debris blocking the rays and would punch a hole in the atmosphere to allow light through.

In two weeks, the sun would shine on Defiance. The schedule was regulated somewhat so each city could count on their several hours of sunlight every couple of weeks and make the most of it.

I got a bit stuck on what the satellite used to punch through the debris.  My husband speculated some kind of ionising beam but it wasn’t made clear in the text.   I wondered where supplies of gasoline and other fossil fuels were coming from with such limited infrastructure running.  I was kind of surprised at the speed of societal recovery given the catastrophic events of the Chaos.  I felt like I would have been more accepting had the book taken place well after the Chaos.

Even as cities and countries rebuilt, it wasn’t easy to get a clear picture of what was left. All he knew was that nothing was like it had been. Life became a throwback to the way things were without the major technological advancements. Although they were able to repair some things, like the electrical grid, rather quickly, all things considered, the stock markets took longer to get up and running and even now, their capacities were limited. Banking was more difficult, although money was safer than ever, since there was no online world to hack into.

I will say the author got me thinking about how things would be different in a post-apocalyptic world.

As for Tru and Caspar, there wasn’t a lot of courtship in the book.  Tru has loved Caspar since she was six years old and by the time she was fifteen, Caspar had decided she was it for him.  At age sixteen, because of problems with Tru’s dad (the at-that-time Defiance Enforcer), she left, but not before she and Caspar (three years her senior) had one night together.  I liked that Caspar was not her first lover and that there was no shame in that.

The book starts when Tru comes back to Defiance and the manner of it creates trouble with a rival club, the Kill Devils.

The world of the MC is brutal and violent and women are treated very poorly.  Caspar and Tru both, would like to see women treated better, but even Caspar doesn’t plan on anything like actual equality.  Violence toward women, including rape is commonplace in the MC world.  *People with rape triggers would be best to avoid it.*  Caspar doesn’t hit women (or rape anyone) but he’s no pacifist.  I found the violence, as committed by the “good guys” to be pretty chilling and confronting at times and this was one of the things that kept me distanced, rather than immersed in the story.

Having had a second degree burn a few years ago (hot tea on the leg), I can say that I had ALL THE MORPHINE at the hospital (where I spent 5 days) afterwards, so the concept of branding and what I understand to be the pain of it, doesn’t work for me generally.  And the “charm tattoos” sounded really painful and super infection-inducing to me.

The story is told in the alternating third person POV of both Tru and Caspar, which I liked, but there are also some chapters in first person from the POV of another character, Mathias.  It seemed an odd choice.  While there was information which Matthias knew that neither Tru or Caspar did and that the reader needed to know (which explained why it was there), I found it jarring.

The writing style often seemed opaque to me and there were times I had difficulty parsing the text.

The Defiance crew was as big as it got these days. It was where we belonged. After spending the past two years in the military, following orders blindly for a nearly non-existent government that was trying hard to stay relevant and didn’t have funding for ammo wasn’t my bag anymore. I was through trying to follow the letter of the law. End of the line.

or, this for example

It was always twenty men from each side when they came to a dishonoring. Once word of what happened here spread through all the Kill Devils charters, there were no more rules to apply. War between two MCs was automatically declared by the killing of a charter president and it meant total and complete anarchy between the two MCs.

I enjoyed the second half of the book better than the first and there was a genuine connection between the two protagonists. The sex scenes were pretty hot and I enjoyed the friendships between Aimee and Luna and Tru.

I could see where the author was going with the story but overall, it didn’t work for me.

2 comments on “Defiance by Stephanie Tyler”