New York to Dallas by JD Robb – B+  I listened to this one on audio when it first came out and finally got around to reading the print version.  I missed the secondary characters less in print – possibly because I knew that they weren’t going to be there much going in.  I loved the Eve/Roarke angst in this one.

“Hell it’s so bad I even miss Summerset.”

When Roarke made some sound, she turned narrowed eyes on him.  “If you ever tell him I said that, I’ll shave you bald in your sleep, dress you in frilly pink panties and take a vid that I’ll auction and sell for huge amounts of money.”

“So noted,” he said that thought: There’s Eve.  There she is.

“…Your point of view is so noted.  Now let me tell you just the way it is.  If McQueen or anyone, got lucky, I’d pay whatever I had to pay to get you back.  And while I paid, I’d hunt him down.  And I’d find him.  When I did, he‘d come to wish I ended him.”

I love it when Roarke gets all alpha. *sigh*

A Room with a View by Kylie Scott – C – very short story (21 pages) set in the same post-apocalyptic universe as her full length release (which is on my TBR) Flesh.  I reviewed this one for ARRA.

The Final Wish by Tracey O’Hara – B/B+ Super short story I reviewed for ARRA about a djinn who‘s fallen in love with her master.  But he has one wish left before she leaves him.

Beneath the Light of a Silver Moon by Mel Tescho – C- The least successful of the 5 novellas, I had a bit of trouble buying that a battered wife would be interested in sex with anyone.

A Sporting Chance by Rhyll Biest – B/B+  A fun story about a barmaid and her boss and a sexy bet.  The longest of the 5 books, I enjoyed this one quite a bit.  Although, why anyone would have a pet cane toad is beyond me.

Assumption of Desire by Elizabeth Brooks – B-  Cute sexy short novella about an accountant who goes to a gay bar and meets up with a twink wearing a pink feather boa – not his usual type.  But, looks can be deceiving and love can be found in the strangest places.

When I Say When by Tia Fielding – B I picked this up at ARe for free and something about it made me decide to read it straight away (even though I bought 17 books at the same time!).  It’s short – less than 25 pages and it has its flaws, but I really liked it.  I decided not to think about the flaws too much – they really only bothered me afterwards. Maybe I was just in the right mood.  Who knows? Maybe it’s because I like the Foo Fighters.  The title is a line from the Foo Fighters song classic Everlong (the Foo Fighters are one of the very few bands where the Venn diagram of my musical taste and that of my husband intersects and we saw them in concert last year).

Busy Jordan goes to a male hooker for sex and is surprised when said hooker turns out to be a face from his past.

My review of Jill Sorenson’s Aftershock will be up next month, as will my review of Sarah Mayberry’s The Other Side of Us.  I will also have a review of Katie Allen’s Private Dicks. 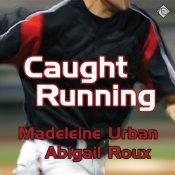 Caught Running by Madeleine Urban and Abigail Roux, narrated by Jeff Gelder – D+ The book is good but the audio is pretty ordinary.  The narrator doesn’t leave gaps between sentences, frequently tripped over his tongue, mispronounced words (“fervishly” instead of “feverishly”, “tearst” instead of “tryst”, “wict” instead of “wicked” and “gravely” instead of “gravelly” – are just a few examples.  The tone of the narrator’s voice often didn’t match the cues in the text.  When a character says something reverently, it should sound that way – not angry or abrupt.  There was little to no vocal differentiation for the characters and I had to rely on dialogue tags to know who was talking.  It was better than the narration in Promises (by Mack L. Jones) in that I was able to persist and finish the end of the book but only marginally.I don’t plan on listening to anymore Dreamspinner audiobooks until they get better narrators.

Kindred in Death by JD Robb, narrated by Susan Ericksen – A-  I enjoyed this one in print and just as much (possibly) on audio.  One of the things that has always impressed me about La Nora is her ability to make me care about a character with just a few sentences.  I found myself feeling deeply for Deena McMasters (the first victim) and her parents and there were even a few teary moments.  I’ll be caught up on my audio listen of this series soon I think.

A review of French Silk for Sandra Brown week at AudioGals. I confess I’m struggling I struggled with this one.  Next up is Hard Evidence by Pamela Clare.  And then, Iced by Karen Marie Moning.

Here’s what you may have missed.

Cost of Repairs by AM Arthur
Leave Me Breathless by Cherrie Lynn
Ride With Me by Ruthie Knox
Celebrity in Death by JD Robb
2/3 of the Midnight Scandals anthology
The Art of Seducing a Naked Werewolf by Molly Harper, narrated by Amanda Ronconi
Dirty Thirty by Cara McKenna
Red Hot Holiday anthology by KA Mitchell, Leah Braemel and Anne Calhoun
Attachments by Rainbow Rowell
Suddenly You by Sarah Mayberry
Men of Smithfield: Adam and Holden by LB Gregg
My brief DNF reviews of Unleashed and Promises (audio)
If I’d Never Known Your Love by Georgia Bockhoven
Extreme Exposure by Pamela Clare, narrated by Kaleo Griffith
Pressure Head by JL Merrow

Also, I guested at ARRA with a review of Sylvia Day’s Reflected in You and Nalini Singh’s Archangel’s Storm

And at  AudioGals with audiobooks reviews of Flat Out Sexy by Erin McCarthy. and A Lot Like Love by Julie James.