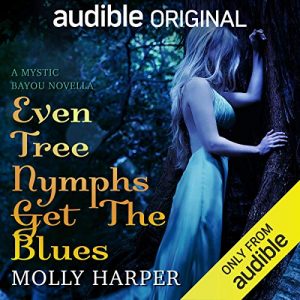 Even Tree Nymphs Get the Blues by Molly Harper, narrated by Amanda Ronconi & Jonathan Davis – B This is a novella-length audiobook which was free to Audible members and is set in the world of Mystic Bayou – a follow on from How to Date Your Dragon and Love and Other Wild Things, both of which I enjoyed very much. Rob Aspern is a human mathematician/data scientist with the League for Interspecies Cooperation. He was something of an antagonist (albeit a benign one) in Zed and Dani’s book – Zed and Bael still call him “Dr. Kendoll Assface” or “Dr. Assburn” – but now he gets his own HFN. Ingrid Asher is the tree nymph of the title. She moves to Mystic Bayou from New York, to open an Ice Creamery. She has been deeply hurt by a man in her past and Rob has a lot of work to do to get through Ingrid’s barriers.

Unsurprisingly, Ingrid is taken under the wing of Jillian, Dani and Sonia. Ingrid has little experience with Girls’ Night Out or friendships in general, having kept to herself for much of the last 70 years (she’s about 500 and is amortal) and the scene where she discusses dating with the girls is very funny. Penis size is mentioned.  Also hilarious is the section where Zed and Bael are giving Rob dating advice. Bael shit-talks Zed constantly and it’s so funny. I bet Ms. Harper was cracking herself up writing them.

As has been the case for the previous books in the series, Amanda Ronconi narrates the heroine’s POV and Jonathan Davis the hero’s. I enjoyed both very much but I noticed that Mr. Davis’ female voices weren’t as good this time round. Ingrid’s voice was quite deep and not very female-sounding. Generally, where a narrator of any gender is portraying a character of a different gender there is a level of suspension of disbelief required. And that’s fine. There are very few narrators who can deliver such authentic-sounding voices. But I hope for enough that I can go with it fairly easily. This time, Mr. Davis’ performance, though far from terrible, required a little more work on my part in that disbelief suspension. Where he excels is the male voices and the accents – again, the banter between Zed and Bael in particular was gold. Amanda Ronconi’s narration was fabulous as usual, including giving Ingrid a subtle Nordic accent consistent with her Norwegian heritage.

Even Tree Nymphs Get the Blues finishes with a solid HFN. It has a low heat level – kisses only and not many of them, but the story didn’t need more than what it had so it worked for me. It was a delightful surprise to find this little freebie available. I’m not sure how well it would work without having listened to (or read) the previous books but for those of us who have, it’s a treat. 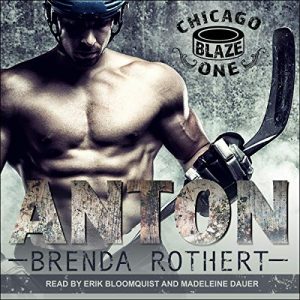 Teach Me by Olivia Dade

Give Up the Ghost by Jenn Burke – joint review with Sirius