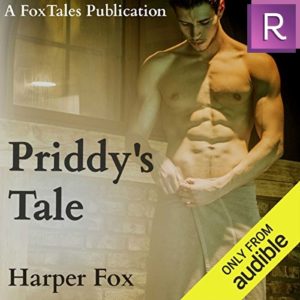 Why I read it:  I downloaded this one with the #AudibleRomance package.

What it’s about: (from Goodreads)  What doesn’t kill you sometimes makes you wish it had…

Priddy’s a lost soul in a part of Cornwall the tourists don’t get to see. He’s young, sweet-natured and gorgeous, but that’s not enough to achieve escape velocity from his deadbeat village and rotten family life.

He’s a drifter and a dreamer, and self-preservation isn’t his strong suit. An accidental overdose of a nightclub high leaves him fractured, hallucinating, too many vital circuits fried to function in a tough world. When a friend offers him winter work in a lighthouse – nothing to do but press the occasional button and keep the windows clean – he gratefully accepts.

His plans to live quietly and stay out of trouble don’t last very long. A ferocious Atlantic storm washes a stranger to Priddy’s lonely shore. For a shipwrecked sailor, the new arrival seems very composed. He’s also handsome as hell, debonair, and completely unconcerned by Priddy’s dreadful past.

Priddy has almost given up on the prospect of any kind of friendship, and a new boyfriend – let alone a six-foot beauty with eerily good swimming skills – out of the question entirely. But Merou seems to see undreamed-of promise in Priddy, and when they hit the water together, Priddy has to adapt to Merou’s potentials too, and fast. His lover from the sea might be a mere mortal from the waist up, but south of that line…

Far-flung west Cornwall has a hundred mermaid tales. Priddy’s loved the stories all his life. Now he has to face up to a wildly impossible truth. Merou’s life depends upon his courage and strength, and if Priddy can only find his way in the extraordinary world opening up all around him, all the ocean and a human lifetime needn’t be enough to contain the love between merman and mortal.

What worked for me (and what didn’t):  While I have many Harper Fox books on my TBR, I haven’t read most of them. I remember enjoying Life After Joe after it was first released – way back in 2010 now. What sticks in my memory is how well Ms. Fox writes melancholy. There is a way she writes which is poignant and sweet and sad but not tipping over into emotional torture porn or OTT melodrama. Like Nora Roberts, Ms. Fox makes me care about characters quickly. And in Priddy’s Tale, I cared so much about Priddy almost from the start of the book. He’s young and a little lost, recovering from an accidental drug overdose which has derailed a life which was already difficult because of an abusive father. When Priddy’s best friend, Kit, leaves town to attend university, Priddy feels very alone.

Taking a job as a caretaker at the local lighthouse, that loneliness becomes even more stark and palpable.

One night, he sees what appears to be a shipwreck. He runs down the many stairs and dives into the water to the rescue. The rescue doesn’t go exactly according to plan. The long and short of it is that he ends up with a merman in his bunk. I don’t think I’ve read a book about merfolk before, certainly not a gay merman, but it turned out to be exactly what I wanted to listen to and just perfect. It was such a delight. I found excuses to keep listening, as I became caught up in the developing relationship with Merou and Priddy and as I wondered how they would get their HEA.

There is a definite fairytale quality to the book which added to the charm of the story and the opening foreword and afterword were little gems too.

I enjoyed the mythology of the merfolk that Ms. Fox created – though I did have one question by the end of the story (it wasn’t essential knowledge, just something I was curious about), the way they swim in the sea and through time. There is just enough worldbuilding to make sense, not enough to bog down the story.

At novella-length there is not a lot of time for complex world-building or relationship development but Ms. Fox sold me on the deep bond which developed between the two men. Even though there was a vast level of difference in their ages and experience (and species!), I could see the sweetness in Priddy’s character and how much love he had to give, how much he longed to give it. I could easily see why Merou was so attracted.  As Merou is described as a cross between David Gandy and Benedict Cumberbatch, it was pretty obvious what (at least initially) attracted Priddy as well.

What else? The narration was so good! Chris Clogs had a variety of English accents; Priddy’s and Kit’s were Cornish and Merou’s was a more toffy accent (think Cumberbatch) and there were others as well, including slight variations on the Cornish tones for the various local characters. Mr. Clogs’ emotion was perfection. I’m sure I was captivated by the story as much by his narration as anything else.

My only small criticism is that, from time to time, Merou’s accent slipped or Priddy’s did and there were times I couldn’t tell who was talking. I mostly managed to put it together from context but it did cause me a little confusion during the listen. Overall however, that is a small complaint in an otherwise delightful listening experience.

I listened to this one for free because it’s in the #AudibleRomance package but had I spent a credit, it would have been well worth the money.