Author: Kaetrin
I’ve been on holiday and I got a bit of reading done (although holidays in our house usually means more family time and less reading time) and in the spirit of actually putting something on the blog for July, I thought I’d post a few thoughts about the books I’ve read in the past week or two.

Nothing but Trouble by Rachel Gibson
I really liked the previous book, True Love and Other Disasters – a return to the Seattle Chinooks Hockey team and what I like best about Rachel Gibson’s writing, so I had high hopes for this one.  Unfortunately, while it was okay, it wasn’t my favourite  – it was one of those books where the font was large and the margins wide and there weren’t actually that many words on the page – it was easy to read pretty quickly.  I liked Mark Bressler and I would have liked to have spent more time with him but the book kind of glossed over everything.  Plus, I wanted to know what happened after – was Chelsea going to pursue acting in Seattle  or just be Mrs. Mark? – was she going to get her surgery?  These questions were left unanswered and I felt like the whole thing was a bit rushed and superficial.  If it was food, I would say it had little nutritional value – sweet, but leaves you wanting something meatier.  C

Savor the Moment by Nora Roberts
I wanted to like this one more than I did.  That said, even an “average” Nora Roberts is better than “average” for others I think.  The problem I think was that there wasn’t much conflict.  Usually, what pushes the story along is boy meets girl, boy loses girl/there is a threat to the relationship and then there’s the HEA.  Well, in this one, for me, there wasn’t much of a threat to the relationship.  It was all happy families and while I enjoyed the banter between the characters and the writing style was as good as ever, the plot let this one down a bit.  I’m wondering what Ms. Roberts will do for the 4th book (to which I am avidly looking forward) for Mal and Parker.  They seem to have been paired up by everyone else but them so far even though there is heat between them.  I’m hoping there will be a conflict I can get my teeth into like in the first 2 books and that this series will end with a bang.  I’d give this offering a C+

Mastered by Love by Stephanie Laurens
I picked up the Australian release (which I thought had a nicer cover but I couldn’t find a picture during my browsing so this is the one you get) at Target when I was away and was pleasantly suprised by this one.  The last few offerings from Laurens have been a bit ho-hum for me.  Too much saying the same thing. In different ways. In short sentences. Over and over. Again. Repetitively.   Maybe I’d had just enough of a break between her stories to enjoy this one.  No, on second thought, this was just a better book.  I liked it so much better than the previous few I’d read (including the 2 of the Black Cobra books I listened to on audio).  It wasn’t quite a return to the heights of Devil’s Bride but it was up there.  Thinking back, the other books I’ve read of hers lately all had the trope where the hero didn’t want to admit his feelings to his lady because of some lame and weirdass belief that would make him somehow vulnerable.  Frankly, I’m over that as a plot device (if I ever bought into it).  Refreshingly, this one is where the family history is that the Varisey’s don’t love – aren’t capable of it (Oh noes! I’m channelling Laurens!).  And, while that’s (of course), a load of old cobblers, the hero believed it and so did everyone else in the book’s world and it wasn’t that he didn’t want to or couldn’t admit it once he recognised it.  So, extra points for that.    I quite liked Royce and Minerva and I really enjoyed this book.  B

Something About You by Julie James
I was lucky enough to win this one from a Dear Author giveaway some time ago and I finally got around to reading it on the weekend.  I read it very quickly – but not for the same reasons as Nothing but Trouble thankfully.  This one’s a winner.  I think I’d read so many glowing reviews of this book that it actually put me off reading it for a while.  I’m happy to say that the reviews were right.  It read like a romantic comedy with a touch of action/suspense, the hero was all dark, brooding good looks (yum!) and the heroine was NOT (hooray) TSTL and didn’t go down any dark alleys alone or decide to solve the crime herself.   Somehow, Ms. James crafted a book where the heroine could be smart and not put herself deliberately in harm’s way to move the story along.  Yay!  The snappy dialogue was great – I’d like to watch the movie.  I really would.  I’m also glad she turned up the heat level in this one – previous books we’ve been left outside the bedroom door and we got inside in this one – while it wasn’t explicit there was a satisfying amount of heat and I liked this aspect much better than the earlier books.  I’m looking forward to her next one that’s for sure.  B+ 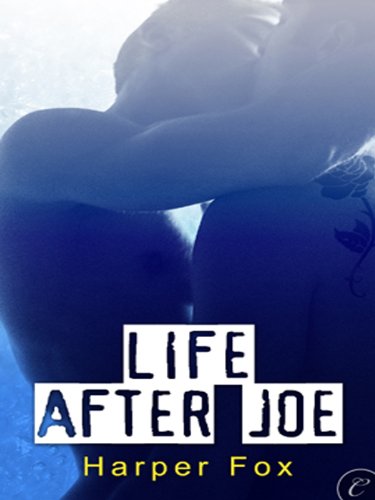 Life After Joe by Harper Fox
Okay, I’m officially outing myself here and publicly stating that I read and enjoy m/m romance.  This is one. And it’s good.
Set in contemporary  England, Matthew is trying hard to get over his ex -Joe – who left him to be with a woman (horrors!) (after carrying on an affair with her for like 2 years – the slut) and is on a path of self destruction – drinking, taking pills, flunking out of medical school and having reckless (and sometimes public) sex with any bloke around.   He finally hits rock bottom and this is witnessed by Aaron – a sexy oil rig worker. Suffice to say that they get together and Aaron helps Matthew make the climb back to happiness.  Aaron has demons of his own though and Matthew is left wondering who “Rosie” is and whether Aaron will do to him what Joe did.  Joe, the scumbag makes an appearance at the end of the book trying to again have his cake and eat it too and I was soooo grateful that Matthew didn’t let himself get sucked in again.  This story is told from Matt’s POV which makes the confusion about who Rosie is totally understandable.  The answer was unexpected (at least to me) but made total sense.  I liked Aaron a lot and I liked Matthew too and I really felt for these characters – the author’s use of words put me right there.  I “got” the dark place that Matthew was in at the beginning (anyone who’s been through a bad breakup probably would I guess) and I liked the poignancy of this sweet story.  I’m looking forward to more from this author. If I had a complaint, it would be that the book finished a bit quickly – I’d have liked a little more. (Plus, I didn’t quite buy that Matthew would have made it onto the rig – too much security, but I went with it for the sake of the story.) B+