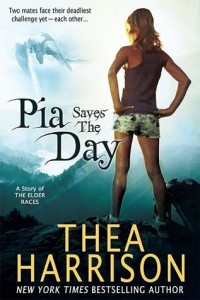 Why I read it:  I was provided with a review copy by the author via NetGalley

What it’s about: (from Goodreads)  Pia and Dragos’s magical young son Liam (the Peanut), is growing at an unprecedented rate, and if that isn’t enough, he is also exhibiting new, and unpredictable, magical gifts. To protect him, the concerned parents decide to move to upstate New York.

Both Dragos and Pia relish the idea of leaving behind the city. They finally have the space to indulge their Wyr side, and Liam can grow in safety. It’s a breath of fresh air—literally—but their idyllic situation is shattered when Dragos is injured in a freak accident.

Stripped of his memory and bereft of Pia’s taming influence, there’s nothing holding back Dragos’s darkest side. And in order to restore her family and save her mate, Pia must confront the most powerful menace in Elder Races history.

What worked for me (and what didn’t):  I like revisiting favourite heroes and heroines and seeing how their happy ever after is progressing but what is even more special is when we get to see them fall in love all over again.  I don’t think it’s too spoilery to say that’s what happens after Dragos loses his memory in an accident.  Pia has to fight for him first though – he is hurt and confused and he doesn’t remember anything about their life together and who they are to each other (and it is a joy to see the heroine doing the rescuing too I must say).

The story is very contained – it’s basically just the two of them for most of it and there is the delicious angst of Pia being terrified of losing Dragos altogether and then of having him back but maybe losing the man she knows. Of wondering whether, if he can’t remember her, he would choose someone else.  There is the treasure of Dragos falling for Pia all over again and his torment over having forgotten her, of his actions when he didn’t know who she was and even a little jealousy, for spice. It’s quite well done and not drawn out unecessarily.

I did think the ending was a bit abrupt and the thing with Peanut kind of hurt this mother’s heart (don’t worry: it’s not awful, Peanut is fine) but it was an enjoyable story which pushed many of my good romance reading buttons. I do think it’s novella for fans – it won’t have anywhere near the impact if a reader doesn’t already know who Pia and Dragos is – but I enjoyed it and I gave a little happy sigh when it became ever more obvious that Dragos and Pia belong together.   It’s a short read – just about 90 pages but it’s a lovely angsty and emotional novella and possibly my favourite amnesia story yet. (And I really want the audiobook too because some of the lines will sound so good out loud.)

He thrust that deadly face into hers, growling, “I keep what is mine. I don’t leave it. I don’t lose it, not ever, and I go after anyone who tries to take it from me.”

I think it shamelessly taps into the good book feels for those who love the characters already.  And what it does, it does very well.

4 comments on “Pia Saves the Day by Thea Harrison”