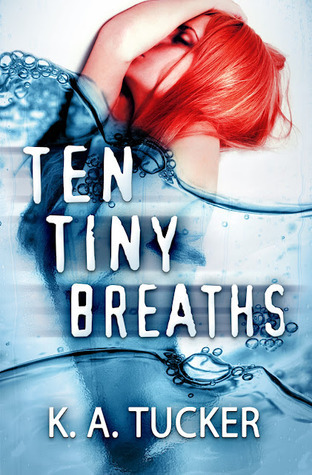 Why I read it:  I bought this New Adult book a little while back and finally decided to open it up and see what was inside.
What it’s about: (from Goodreads)  Kacey Cleary’s whole life imploded four years ago in a drunk-driving accident. Now she’s working hard to bury the pieces left behind—all but one. Her little sister, Livie. Kacey can swallow the constant disapproval from her born-again aunt Darla over her self-destructive lifestyle; she can stop herself from going kick-boxer crazy on Uncle Raymond when he loses the girls’ college funds at a blackjack table. She just needs to keep it together until Livie is no longer a minor, and then they can get the hell out of Grand Rapids, Michigan.But when Uncle Raymond slides into bed next to Livie one night, Kacey decides it’s time to run. Armed with two bus tickets and dreams of living near the coast, Kacey and Livie start their new lives in a Miami apartment complex, complete with a grumpy landlord, a pervert upstairs, and a neighbor with a stage name perfectly matched to her chosen “profession.” But Kacey’s not worried. She can handle all of them. What she can’t handle is Trent Emerson in apartment 1D.Kacey doesn’t want to feel. She doesn’t. It’s safer that way. For everyone. But sexy Trent finds a way into her numb heart, reigniting her ability to love again. She starts to believe that maybe she can leave the past where it belongs and start over. Maybe she’s not beyond repair.

But Kacey isn’t the only one who’s broken. Seemingly perfect Trent has an unforgiveable past of his own; one that, when discovered, will shatter Kacey’s newly constructed life and send her back into suffocating darkness.

What worked for me (and what didn’t): This is a hard book to say much about because the plot hangs on one thing and it’s either going to work for you or it won’t.  I think, overall, it was too melodramatic for me.  I liked Trent and Kacey together but the big reveal cast a whole new light on what had gone before and it left me feeling a bit strange.
Some of the secondary characters stood out:  Nora “Storm” Matthews, a bartender/stripper/acrobat single mother with a heart of gold; Officer Dan, the man who looks at Storm’s face and not her considerable assets (well, he mostly looks at her face, he isn’t dead); Cain, the strip club owner who is serious about looking after his employees; and Ben, the would-be-sleaze-but-actually-nice-guy bouncer/law student.   They added depth to the story and felt like they were there to do more than just be foils for Kacey and/or Trent.  Livie, Kacey’s sister, however felt largely absent for me.  She had a bit to do at the end, but, as Kacey worked nights and Livie was at school during the day, they didn’t seem to spend much time together – as the story is told from Kacey’s 1st person POV, there wasn’t  much chance for Livie to have a larger role.I very much felt for both Kacey and Trent but the story felt a little too much like something I’d see in Days of Our Lives – a little too much cheese and vaguely discomfort-inducing.  I’m still not entirely sure how I felt about the ending – don’t worry, it is a romance and therefore has a HEA but… – no, I will not give away spoilers. I don’t think it’s hard to guess but my lips are sealed.  Sealed.

I’m still not entirely sure I understand why the ten tiny breaths of the title had to be tiny.  Obviously I fail at symbolism.

What else? I bought this a while ago so I have the self published version. It has been picked up by Simon & Schuster so I’m hoping the typos have been fixed and some of the incorrectly used words corrected.

Like a vacuous pull, my lungs constrict. I see, rather than feel, Trent’s hand on my knee, squeezing gently.

I let out a vacuous sigh and lie back down on Trent’s chest as if unloading that sheer magnitude of hatred is somehow liberating.

Dr. Stayner is a friend of theirs and he’s really good and—” The tears are streaming now. “Please don’t digress. You’re doing so well. Please don’t.”

The style was entertaining and engaging and I enjoyed the author’s voice. Ultimately, the plot itself was what gave me some reservations about the book, but I’d certainly be happy to read another book by Ms. Tucker.Grade: C+
BUY IT:
AMAZON       KOBO

One comment on “Ten Tiny Breaths by K.A. Tucker”