The Firebird by Susanna Kearsley, narrated by Katherine Kellgren 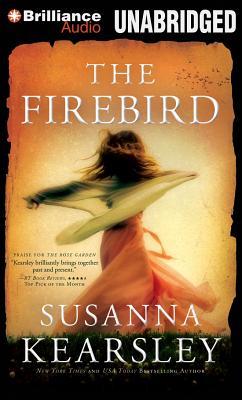 Why I listened to it:  I borrowed a copy from a friend because mail from The Book Depository takes too long when a book is this much anticipated.

What it’s about:  (from Goodreads):  Nicola Marter was born with a gift. When she touches an object, she sometimes glimpses those who have owned it before. When a woman arrives with a small wooden carving at the gallery Nicola works at, she can see the object’s history and knows that it was named after the Firebird – the mythical creature from an old Russian fable. Compelled to know more, Nicola follows a young girl named Anna into the past who leads her on a quest through the glittering backdrops of the Jacobites and Russian courts, unearthing a tale of love, courage, and redemption.

Warning:  Spoilers for The Winter Sea

What worked for me (and what didn’t): I have been eagerly anticipating this book.  My previous two favourite Kearsley books were The Winter Sea/Sophia’s Secret and The Shadowy Horses.  When I found out that Anna Moray from The Winter Sea and Rob McMorran from The Shadowy Horses were featured in this book, I just knew it was going to be wonderful.  I was not disappointed.
Nicola Marter has a talent for psychometry (picking up psychic impressions from objects) but it is one she is discomforted by and she hides it.  Some years prior to the story’s beginning, she spent some time in Edinburgh participating in a series of psychic experiments at a specialist institute, she met Rob McMorran.  Regular Kearsley readers/listeners will know Rob (then called Robbie) from The Shadowy Horses.  Robbie could see and talk to spirits, read people’s minds and was generally very psychically gifted.  At the institute, Nicola meets the now grown up, police constable Rob.  He is handsome, gentle, gifted and comfortable in his own skin.  Nicola is very drawn to him but a relationship with Rob means that she will have to become comfortable with her own unique abilities.  She shies away and leaves both the Institute and Rob.
Now working for an art gallery specialising in Russian pieces, Nicola is consulted by Margaret Ross, the owner of a wooden carving, a firebird, which has been handed down for generations in her family.  Her mother has recently died and with no other relations and little past excitement and joy in her life, she wishes to sell the firebird to fund a round the world cruise, which is likely the only chance she will get for such an adventure.  When Nicola touches the firebird she sees a girl, Anna, in conversation with the Empress Catherine, wife/widow of Peter the Great.  There is no marking on the firebird and no way to authenticate it through the usual means but Nicola is so struck by Margaret’s plight that she resolves to try and use her gifts (albeit quietly) to see if she can assist Margaret to identify the provenance of the carving.  As it happens, Nicola is due to go to St. Petersburg the following week for an art show and she hopes to take some time for research when she’s there.
However, Nicola’s gifts are not super strong and she worries she will be able to achieve her goal in the time allotted.  So, she enlists Rob’s aid.  There follows, a kind of road romance as Nicola and Rob search for the mysterious Anna and the origins of the little wooden bird.    In the process, Nicola is challenged regarding her gift and falls in love again, more deeply, with Rob.
Anna’s story takes up from Slains Castle in Scotland when she is a small child.  At the end of The Winter Sea, Sophia had left her in the care of the Logan family, to be raised as their own daughter.  Because there was a price still on John Moray’s head, it was not possible for Sophia and John to retrieve her (at least not yet) and she has no real knowledge of her birth  parents – in fact, she thinks the Logans are her parents.  When the truth is revealed, she hides in the library of Slains Castle where she meets a kindly older man who tells her of her real parents and explains to her why it was necessary to hide her existence from the English.
It is in this exchange that one of the most beautiful (for me) passages from the book appears.

“The strongest soldier cannot balance long upon the blade that does divide his honour and his heart,” the man said, “and whatever way he falls, the cut will kill him.”

One comment on “The Firebird by Susanna Kearsley, narrated by Katherine Kellgren”