Sophia’s Secret (aka The Winter Sea) by Susanna Kearsley, narrated by Carolyn Bonnyman 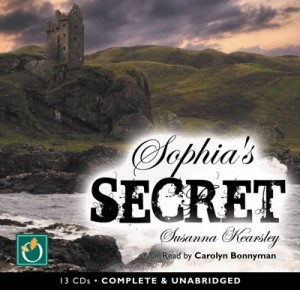 Why I read listened to it: I’ve become a Susanna Kearsley fan and when I had a choice of reading The Iron Duke (Meljean Brook) or Sophia’s Secret (both of which I have in print) I decided to “read” both at once and downloaded the audiobook from Audible.
When this book was released in the US it was renamed The Winter Sea and the US audiobook release won narrator Rosalyn Landor an audie award this year.  I’m not a huge fan of Landor audie or not, so I went with the Bonnyman option – she narrated Mariana and I enjoyed her narration very much so I chose this version which, apart from the title, is exactly the same.
What it’s about: Carrie McClelland is a successful historical fiction writer. She is writing a novel about the Jacobite rebellion of 1708 and travels to Scotland to attend the christening of her agent and BFF’s child.  While there, she visits the ruins of Slains Castle, where The Dowager Countess of Erroll and her son the Earl of Erroll lived during that time, they both having great influence and involvement in the rebellion.  Her book hasn’t been coming together and she decides to relocate to Cruden Bay, near Slains and start again, with a “point of view” character.  That person is not supposed to be real, but rather someone who can “link the scenes together by her presence”.  When Carrie gives this character the name Sophia Paterson after one of her ancestors, she thinks it is a deliberate, conscious choice. She also thinks the ideas about her book, which are coming thick and fast now, are subconscious.  She’s wrong on both counts.
What worked for me (and what didn’t):  This is a book within a book.  We get Sophia’s story and Carrie’s as she writes about Sophia. It is also a dual romance book.  Both Sophia and Carrie fall in love and have (mostly) happy endings.The romance for Carrie comes from the son of her landlord (she’s renting a cottage in Cruden Bay), a professor of history at the Aberdeen University, Graham Keith.  Graham’s younger brother Stuart also has an eye for Carrie but it is clear early on that the spark is between Graham and Carrie.  Stuart is charming but somewhat flighty and not terribly serious in his affections and they actually have little in common.  (He put me in mind of a (quite a bit) nicer version of Adrian Sutton-Clark from The Shadowy Horses actually).   There is little that keeps Carrie and Graham apart – Stuart is not a serious barrier.  I did think that not making things clear to Stuart was more of a plot point rather than organic – in other words, I think it wasn’t made explicit to Stuart much earlier on that he was out of luck to serve the purposes of the book only.Sophia has the more dramatic and angsty storyline and because of that, the easier relationship with Carrie and Graham was a welcome change.

Sophia is an orphan of about 18 years at the start of the book.  She travels from her home in Kirkcudbright (pronounced “Kerr-COO-bree”) in the west, to Slains Castle to live with her distant relative, the Countess of Erroll.  She is treated there like a daughter of the house.  Sent from the court of the exiled James Stewart at Saint-Germain in France, Nathanial Hooke and John Moray travel to Slains, the plan being that they will travel Scotland and gauge support for James.  John however has a price on his head of 500 pounds – an enormous amount of money for that time and he is confined to the castle for his protection.  John and Sophia are drawn to one another and commence a clandestine relationship – they know that the Countess would not encourage their relationship because John is a wanted criminal.    When John returns to France to assist with preparations for the rebellion and to fight with his regiment in Flanders against the English, it is with the promise to Sophia that he will return with King James and they can then be together forever.  The rebellion fails (as we know from history) and things get pretty bleak for Sophia for a good long while.  There is sadness and a difficult decision but never fear, Sophia does end up happy. Trust me.

I did wonder if John wasn’t being very selfish in having a relationship with Sophia in such desperate times.   They did a lot more than hold hands if you know what I mean – and this put Sophia at risk in terms of her future if something should happen to John (what if there were a child, she was no longer a virgin, etc) and also because she could easily be used as a pawn against John if it were ever discovered what she means to him.

The reasons for their secrecy were compelling and made sense.  As do the events at the end of the book (about which I will say no more).

I really think I’ve listened to Ms. Kearsley’s books in the right order.  Each book so far has, for me, gotten better – and by better, I really mean more romantic.    There is plenty for a romance lover in this book.  Add to that the beautiful prose and the rich historical setting – well, it’s a gem.

What else? Carolyn Bonnyman’s narration is excellent.  Portions of the conversation are written in the Doric – the local language which was fun to listen to (I would have had no hope of pronouncing things so well), as well as Scottish, English and Canadian accents, all well differentiated.    The scenes from Carrie’s time were clear because she used Carrie’s Cannadian accent to narrate and when we were in Sophia’s time, the narration had a Scottish accent to it, even though that part of the story is told in third person.  I knew where I was in time at each point because of it and it heightened the listening experience.

8 comments on “Sophia’s Secret (aka The Winter Sea) by Susanna Kearsley, narrated by Carolyn Bonnyman”