Where Nerves End by LA Witt 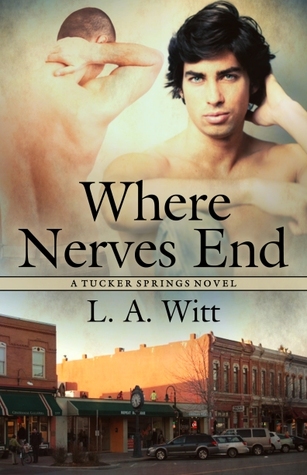 Why I read it:  I’ve had this one on my TBR for a while, having bought it shortly after it was released.  After reading some other Tucker Springs books, I wanted to read all of them.
What it’s about: (from Goodreads)  Welcome to Tucker Springs, Colorado: Population, 70-something-thousand. Home to beautiful mountain views, two respected universities, and a ridiculously high cost of living.Jason Davis can handle a breakup. And an overwhelming mortgage. And a struggling business. And the excruciating pain that keeps him up at night thanks to a shoulder injury. Handling all of it at once? Not so much. When his shoulder finally pushes him to a breaking point, he takes a friend’s advice and gives acupuncture a try.Michael Whitman is a single dad struggling to make ends meet. When a mutual friend refers a patient, and that patient suggests a roommate arrangement to alleviate their respective financial strains, Michael jumps at the opportunity.

Living together would be easy if Jason wasn’t so damned attracted to Michael. Good thing Michael’s straight, or the temptation might just be too much.

What worked for me (and what didn’t): I quite liked this book.  I enjoyed Jason and Michael’s relationship and their mutual friendship with Seth.  (Seth’s getting his own book soon – Covet Thy Neighbor – cannot. wait.).  It was certainly sexy and I enjoyed the slow build of the sexual tension.
I felt that Michael’s son Dylan went a bit missing in action though – considering the relationship Jason and Michael are contemplating there wasn’t much of Jason and Dylan bonding (my parent gene wanted some of that I think).  I did really like how Michael put his son first and how he and his wife handled talking to Dylan about Jason and his place in Michael’s life.  I liked that Daina and Michael were friendly with each other and made Dylan a priority.  It’s a rare book where the ex-wife isn’t demonised and I appreciated that no end.My own experience of acupuncture has been less than stellar and I did feel a little beaten over the head with the wonders of alternative medicine in the book.  It really doesn’t work for everyone you know.  But, if it works for you; great.

Jason’s financial troubles at Lights Out never really got resolved and I would have liked to have seen that storyline go somewhere and I did feel the end of the book was a little rushed.

But, I liked Michael and Jason together very much and enjoyed my visit to Tucker Springs.

Tagged with: LA Witt, mm romance
Posted in: B reviews