Delusion in Death by JD Robb 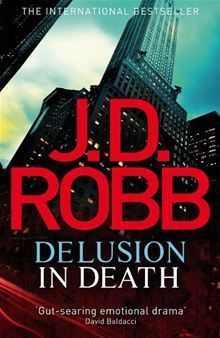 Why I read it: I’ve had this on my TBR for some time and decided I should read it before Calculated in Death turns up on my iPod. Not a hardship.
What it’s about: (from Goodreads)  ‘What would cause someone to want so many people, surely many of them strangers, to slaughter each other?’The scene that greets Lieutenant Eve Dallas and her team one terrible evening in New York is more shocking than any of them have ever witnessed. A usually comfortable downtown bar is strewn with bodies – office workers who have been sliced, bludgeoned or hacked to death with the nearest weapon available. It appears they all turned on each other in a desperate blinding rage.As Eve and her husband Roarke – who owned the bar among his many properties – investigate the big-business workers of the city, they link the attacks back to the Urban Wars and the chemical warfare used all those years ago. With another slaughter imminent, Eve must turn to unexpected sources in order to stop a killer who is getting revenge by creating mass carnage…
What worked for me (and what didn’t): I’m an unabashed fan of the series.  I find the storytelling reliably good and, having read all the previous books, I feel like I know the characters well – not just Eve and Roarke, but the secondary ones too.  It’s a little like catching up with family for me.  And I’m still not sick of it.  Not in the least.
After the events of New York to Dallas, which involved a lot of personal trauma  for Eve, the two subsequent books in the series have been less personal, more procedural.  That’s not to say that there’s no personal – Eve and Roarke are still dealing with and processing the events of NY2D.  From a police procedural point of view, the crime is fairly straight-forward and Eve and her team delve into the minutiae to solve the crime. I found it engaging and interesting, if a bit fast.  Robb has always been able to make me care very quickly about the victims of the crimes and those left behind and she does it again for me here.For me, it was a solid entry in the series, without being earth-shattering.  I adore Roarke and Eve together and I really liked how there was a spirit of co-operation between Eve and Summerset in this book.  And there is the trademark humour too, which, even though the crime is awful, serves to add some lighter moments to what could be a fairly dark story.

“Dick Berenski, chief lab tech, hunched over his station with its series of comps like a gargoyle.  His egg-shaped head rose over the shoulders of the lab coat he’d tossed over a screaming orange shirt and plum-coloured skin-pants.  She sincerely wished she’d lived her entire life without seeing Dickhead in skin-pants.

He sported a gold hoop in his ear – a new touch, and fancy, textured shoes that matched the pants.

She made a new wish, that she would never in her lifetime observe him doing salsa.”

What else?  I’ve heard from some other readers that they felt the sex scenes were not as explicit or prolific since the books started being released in hardcover (apparently this occurred from Divided in Death).  I haven’t really noticed any change.  Some books are more romantic and some are more police procedural, but there is always romance between Eve and Roarke and I still feel their connection.

“No, but some insist they are.  Like God’s all, zip, pow, and creates an orangutan out of thin air.”

“I simply adore your mind.”

“Well, that’s the nutshell from one side, and the other far end’s all, no, uh-uh. No higher power out there. What happened was basically a giant fart in space, and boom.”

2 comments on “Delusion in Death by JD Robb”