About Last Night by Ruthie Knox 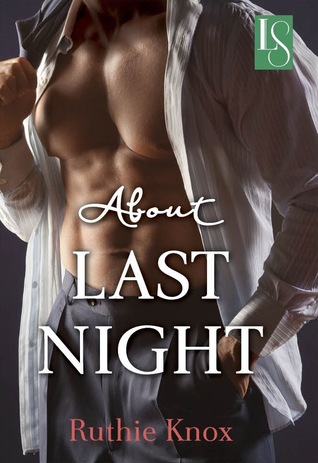 Why I read it:  I won this at Romance Around the Corner back in July (I had to collect it from NetGalley, hence the tag).  (In fact, it is on the special side because that marked the beginning of my online friendship with Brie – everyone say awww!)
What it’s about: (from Goodreads)  Sure, opposites attract, but in this sexy, smart, eBook original romance from Ruthie Knox, they positively combust! When a buttoned-up banker falls for a bad girl, “about last night” is just the beginning.

Cath Talarico knows a mistake when she makes it, and God knows she’s made her share. So many, in fact, that this Chicago girl knows London is her last, best shot at starting over. But bad habits are hard to break, and soon Cath finds herself back where she has vowed never to go . . . in the bed of a man who is all kinds of wrong: too rich, too classy, too uptight for a free-spirited troublemaker like her.Nev Chamberlain feels trapped and miserable in his family’s banking empire. But beneath his pinstripes is an artist and bohemian struggling to break free and lose control. Mary Catherine—even her name turns him on—with her tattoos, her secrets, and her gamine, sex-starved body, unleashes all kinds of fantasies.When blue blood mixes with bad blood, can a couple that is definitely wrong for each other ever be perfectly right? And with a littlle luck and a lot of love, can they make last night last a lifetime?
What worked for me (and what didn’t): This was a sexy read but quite different from the style of Ride With Me which was much more light-hearted.  I think possibly I wasn’t expecting that.  I can’t quite put my finger on why this one didn’t work better for me than it did – as much as I liked it – it had all the ingredients I’d have thought would make it an A read. Interesting characters, a great sense of place (I loved the modern London setting), witty banter and strong dialogue, a to die for hero and a prickly but sympathetic heroine.  But, for some reason, I felt somewhat disconnected and my enjoyment (and I did enjoy it dammit) was somehow muted, like I was reading from behind opaque glass or something.I was left with the conclusion that it was something about me, either at the time (my mood) or in general, rather than a problem with the book.  It’s not the writing, because I connected just fine with the characters in Ride With Me.  And while this story is different, it is obviously written by the same person, because the writing voice is familiar and I like it.

Cath tried to ignore the flush of pleasure that washed over her at the sight of him, but it was hard. Half a dozen different places on her body were reminding her of what he’d done to them on Saturday, and not one had a bad word to say about him. Stupid body.

The story was sexy and there were some wonderful light-hearted moments which had me smiling as I read.

“You’re just trying to get me back into bed with you.”

Nev’s mouth curled up at the corners, and he lowered his voice, leaning closer. “Of course I’m trying to get you back into bed with me. I loved having you in my bed. I’d like to chain you to my bed.” He trailed a finger down her bare arm, leaving a trail of sighing nerve endings. “But I’d also like to have lunch with you.”

As I’m a hero-centric reader, it is integral to my enjoyment of any novel for me to like the hero (at least by the end of it).  I liked Nev straight away.  I liked his thoughtfulness and his patience.  I liked how he never denied how turned on he was by Cath but he made sure she always knew it was much much more than just that.  I liked how there was more to him than the “City” Cath dubs him at the Tube station.  I did not like his cowardice.  And, it was cowardice.  A smart, healthy, educated man, he would well be able to make his own way in the world, but for much of the book, he chose to be under his mother’s (and his older brother’s) thumb rather than striking out on his own.  And I never really understood why he didn’t.  I’m not all that sure I ever did actually. (Plus, his “scheme” was just a bit silly.)

Because I’m a forgiving kind of person, I did forgive Nev for being a coward and he did strap on a pair by the end of the story.

The story felt to me like it had 2 distinct parts. First there was Cath holding back because she was convinced a relationship with Nev would be a mistake but unable to completely walk away. (I thought her capitulation was kind of sudden actually, but at the same time I was getting a bit tired of the distance she kept also so I was happy to see the end of it).  Then, the next part was about Nev – his relationship with his family, growing a pair, not hiding anymore.   I was sort of unprepared for the right turn the story took when Nev and Cath decided to travel to Leyton – what had been about Cath was suddenly over, or it felt like it.

Having said all that, I did enjoy the book.  I have a thing for British heroes anyway and I do love Ms. Knox’s writing voice, her sense of humor and the way she writes sexy men.

“… I didn’t know you owned clothes with colors.” She’d worn a sheer, short-sleeved red blouse with a black camisole and a black skirt to work. It was nothing fancy, but she’d hoped it would pass for both office and dinner attire. And, okay, she’d also hoped he’d like it.

“I have a few things that aren’t black.”

“Of course you do, darling. Only all the ones I’ve seen are very small, and I get to take them off with my teeth. You’ve trained me to salivate at the sight of color, like one of Pavlov’s dogs. Your top is making me very hungry.”

As I’m writing this, I think the underlying theme for me was cowardice.  Both Nev and Cath were cowards when it came to pursuing that which made them happy and both were incredibly brave at the same time – but just in different ways.  Cath was brave in seeking out her career fortunes but cowardly in love, Nev was the reverse.

Leaning close to her ear, he murmured, “I promise you, whatever we are together, it’s not a mistake. It’s too good to be a mistake.”

By the end, they had both strapped on a pair.

I liked this one.  I’m glad I read it. It was absolutely worth my time.  But I’m left with the nagging feeling that I should have liked it more than I did.

In any event, with this and Ride With Me, Ruthie Knox has made my autobuy list.

Tagged with: NetGalley, Ruthie Knox
Posted in: B reviews

4 comments on “About Last Night by Ruthie Knox”