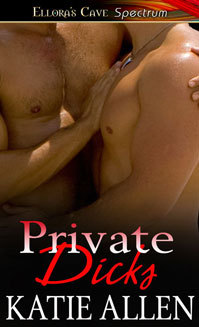 Why I read it: There was a sale at ARe and there was my wishlist. Goodreads recommendations are bad for my wallet. Enough said.
What it’s about: (from Goodreads)  Ex-cop Isaac Rhodes is a tough and intimidating private investigator with a talent for kicking in doors and knocking bail jumpers’ heads together. His only soft spot is for his partner, Nate Washington—though Wash makes him anything but soft. He’s silently lusted after Wash for a year, until his desire drives him to finally come out to his partner.

This confession leads to Wash admitting a few secrets of his own, unleashing needs that result in hot, sweaty, sexy, man-on-man intimacy. Rhodes is elated…until Wash admits he’s unsure if he’s willing to endure the often prejudice-filled life of an outed gay man. Crushed, Rhodes backs off. But one missing child—and a gun to Wash’s head—convinces Rhodes to do whatever it takes to get his man.

What worked for me (and what didn’t): In terms of the mix between romance and suspense and making the two work and play off each other, this book was pretty much perfect.  Loads of romance and connection and fun.  The suspense plot was believably intertwined with the romance and the two leads didn’t try and have sex when bullets were flying.  Because Wash and Rhodes have been working together for about a year when the book starts, the speed of the developing romance works – they have an established relationship which becomes more than friendly.  And, having to go undercover in a gay club helps get them thinking in the right direction.

And, did I mention it was funny?

Rhodes smirked at him. “Just wait ’til we get inside.”

“Better, Wash,” Rhodes corrected as the bouncer unclipped the rope to let them through. “The word is ‘better’.”

Wash made me laugh a lot.  Especially when Rhodes was baffled his “incomprehensible hand signals” – you know, those ones you see on the TV all the time and no-one knows what they mean?  Well, Rhodes, who used to be a real cop, doesn’t know either.  But Wash makes the signals and Rhodes goes along.

The chemistry between these two was apparent in every interaction but the conflict – whether Wash wants to deal with being out (he’s bisexual so he could be happy with a woman and have the occasional gay hook-up on the downlow) is believable enough.  Although, now that I think about it, Wash never suggested he might need to have the occasional hook up with a woman… I digress).

Wash, even though he is a walking hard-on around Rhodes, asks for time to decide:

Wash looked at him with what appeared to be disappointment. “You’re not going to talk me into it?”

“You are a fucking teenaged girl,” Rhodes growled, pushing himself up from the couch. “Go home. If I don’t get to fuck anyone, I’m going for a run.”

“Fine,” Wash huffed, standing up. “But I’m going to write ‘Rhodes is an asshole’ in my diary like a hundred times.”

See what I mean about funny?

The suspense story involved sex trafficking which is obviously something very serious, but the humour doesn’t intrude on that.  Rather, it lightens what could otherwise be a very heavy storyline. Both Rhodie and Wash take the safet of kids very seriously.

Rhodes even tries to make Wash clean up his potty mouth around their teenaged client.

Wash snorted. “Why would you think we’d do anything just to make you feel better? Ask Gonzo—he’ll tell you that we’re just a couple of assholes.”

Rhodes shot him a look and Wash made a face. “Sorry. Suppose I shouldn’t swear around a kid. Okay, so we’re a couple…” Trailing off, he glanced helplessly at Rhodes. “What’s another word for asshole?”

Rhodes just closed his eyes with a sigh.

What else?  I enjoyed this book from start to finish.  At just under 150 pages, it wasn’t super long, but it did everything it needed to so I thought the length was just perfect for the story actually.  It is pricey, so get it when it’s on special somewhere. But – get it.

Tagged with: Katie Allen, mm romance
Posted in: A reviews