Hide Out by Katie Allen 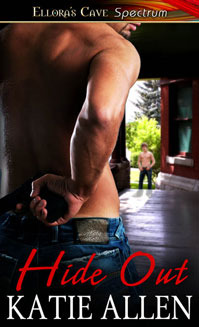 Why I read it:  After the success of Private Dicks and seeing that many of my Goodreads friends loved the follow up book too, I bought this one as well.  Damn ARe sales…
What it’s about: (from Goodreads) When Officer Peter Giordano is assigned to keep Trevor Haas safe until he can testify against his murderous father, he expects the hardest part of his job will be keeping his hands off the gorgeous witness. The two men hide out in the small, sleepy town of Honeysuckle, fixing up their dilapidated safe house by day…exploring each other’s bodies by night.Their small-town neighbors have some secrets of their own, however, including one that someone is willing to kill to protect. Soon, a neighbor is dead and Pete and Trevor are thrown into the middle of a murder investigation. The two men struggle to keep Trevor’s true identity a secret, knowing his father will stop at nothing to silence the star witness against him-even if that means killing his own son.Note: Pete and Trevor won’t have to go it alone. Wash and Rhodes, the crush-worthy heroes from Private Dicks, are along for the ride once again.
What worked for me (and what didn’t): This one didn’t work quite as well for me as Private Dicks.  Possibly it’s because I read them back to back and that made the flaws in this one more obvious, because they were largely missing from the earlier book.  I can believe a fast romance when the couple already know and like each other.  Established relationships which turn romantic or return to romance work best for me in a shorter format or time frame.  Hide Out was a bit longer than Private Dicks (nearly 200 pages) but the romance between Trevor and Pete occurs in a matter of days – when they had never laid eyes on each other before the start of the book.   While I liked Trevor and Pete together, the blurb had set me up for a long slow burn – 7 months of home renovations – but, like the romance, the renovations were done at lightning speed (possibly it’s the fastest reno in history aside from TV reality shows).

The other thing which bothered me was that for the first part of the book, Trevor and Pete, who are both gay, don’t come out to each other and labour under the mistaken belief that the other is just “fucking with him”.  It got tired real quick.

The murder in Honeysuckle made sense, but the wider story arc of Pete and Trevor hiding out and being effectively undercover to keep away from Trevor’s psycho dad, was not as well executed.  It seemed to me that Pete and Trevor wouldn’t have been that hard to find.  And, as it turns out, I was right.
Having said all that, it was an enjoyable read and the characters were charming and fun and sexy as all get out.  Once Trevor and Pete admitted to both being gay, things moved much more smoothly.  Then there was the appearance (much more than just a cameo) of Rhodie and Wash from book 1.  Wash is still making those incomprehensible hand gestures (which Pete doesn’t understand either) and the pair help both to solve the local crime and to renovate the house.  There is also a smoking sex scene involving all 4 of them – though 2 are only watching.
I would have to say however, that the description, used a couple of times in the book, of coming so hard that it felt like “his insides melted and shot out of his cock” was somewhat disturbing.
What else? This is a good book, but I don’t think it was as good as Private Dicks.  I think though, that I would have liked it better if there had’ve been a gap between reading the two books.  Again, it is on the pricey side. so wait for a special.

Tagged with: Katie Allen, mm romance
Posted in: B reviews