My Lord and Spymaster by Joanna Bourne 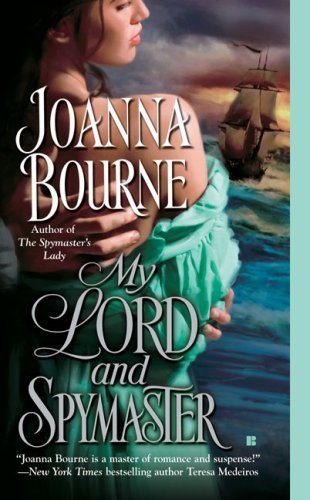 Why I read it:  As my copy of The Black Hawk was winging its way to me, I realised I hadn’t read My Lord and Spymaster.  I have read The Spymaster’s Lady (and listened to it on audio too) and The Forbidden Rose (all of which were excellent) so I don’t quite know why this one had been languishing on my TBR.
I do find Joanna Bourne novels… dense – as in a rich chocolate dessert.  I love them but they require some concentration on my part.  Ms. Bourne has a lovely use of words, neither flowery nor simple, and she doesn’t write the sort of books one can skim.
Anyway, in anticipation of The Black Hawk, I picked this one up.
What it’s about: Jess Whitby, stolen from the crime lord Lazarus and returned to her father Josiah in the previous book, is trying to find Cinq – a spy who has been selling secrets to the French.  Josiah Whitby has been arrested for the crime and Jess is desperate to prove his innocence.  One of her suspects is Captian Sebastian Kennett, bastard son of the Earl of Ashton and the man who discovered most of the evidence which led to Josiah’s arrest. We readers know of course that Bastian cannot be Cinq because he’s the hero, but Jess doesn’t know that.  There is an instant attraction and connection between them but the situation with Cinq and Josiah means they are cautious about acting on it – if Josiah hangs then Bastian will be responsible in part for the death of Jess’ father (not the best aphrodisiac) and what if Bastian is really Cinq?
What I thought (aka, what worked for me and what didn’t): Bastian and Jess are, as I said above, instantly attracted to one another.  They spend a large part of the book in close proximity (I dislike books where the hero/heroine are separated for much of it, movies too for that matter, never fear this does not happen here) but in terms of their deepening relationship, they are kept apart by a real and not at all trivial conflict.  In spite of themselves they fall into love – come to think of it, this is one of the common themes I have found in Joanna Bourne’s books.  I love that there is no “big misunderstanding” or anything that could be simply resolved keeping them apart.  And it wasn’t just that Bastian, from Jess’ POV, might be Cinq.  The real conflict was that Josiah might hang and Bastian would be a large part of the cause of it.  Because Josiah was a secondary character, I couldn’t be sure as a reader that Josiah wouldn’t actually turn out to be a traitor or even if he was innocent, nevertheless be convicted (and I’m not going to tell you here!).  So, that meant that there was a real tension for me in reading – whereas, if it were only that Jess thought Bastian was Cinq, well that may have palled quickly.  I love that Ms. Bourne writes smart characters. They are skillful and expert in their various fields and they remain that way all the way through the story.
I enjoyed the book very much, but looking back on it after a couple of days, I’m not sure that the identity of Cinq made total sense to me.  Without giving away spoilers, it’s hard to say exactly why, but on one level, it was kind of obvious but there was another, er, aspect, shall we say to Cinq and that was the bit that I didn’t think quite gelled with the rest of the book and that particular character.
Military Intelligence’s Colonel Reams reappears in this book but he left the scene kind of abruptly and after I finished I wondered where that plot thread ended up.
There was hardly any horizontal action between Jess and Bastian – a LOT of sexual tension and untimely interruptions but not much of the other.   On the one hand, I can see that to have them getting busy much earlier would have been inconsistent given the fears of each main character, but because I am a reader and readers can be contrary and sometimes impossible to satisfy, I was nevertheless disappointed that we didn’t see more of Jess and Bastian in an intimate setting.
I do love how Ms. Bourne writes and how it is clear in whose POV we are in the narrative simply by the syntax of the words.  Bastian and Jess think differently and this is obvious from the text.  It is perhaps more obvious in books where the heroine is French and the hero is British but it is still very present here. Here’s a few examples of what I mean:-
From Jess’s POV:

If half the rumors were true, he’d flattened men with those efficient sledgehammer fists in every port around the Mediterranean.  The other thing they said about him was true, too.  He was soft with women.  He never thought of touching her when he was like this.  In the years that lay between that boy in the cold mud of the Thames and the man he’d become, he’d changed into someone who couldn’t lay angry hands on a woman.  The chair was having a hard time, though.

He stomped across the room.  His shoulders and the back of his neck kept right on being expressive.

With Jess you knew when she was willing, because you didn’t get your teeth knocked out.

He could see in her eyes she was letting herself fall in love with him.  She was about three-quarters deep so far and sinking fast.  He wondered if she knew.  Almost too late for her to stop.  It had been too late for him for a long time.

What else?  The other bonus in this novel is that we get to know Adrian a bit better and as he’s the hero in The Black Hawk and has featured prominently in the other books too, it was an extra treat.  Overall, maybe this wasn’t my favourite Bourne novel, but it was still very, very good.
Joanna Bourne writes dense, historical romance with clever main characters and beguiling secondary ones.  I find her books immersive and rich and for that reason, I like to devote myself to the reading of them rather than allowing any skimming.  There are so many little glimpses of things which may or may not become significant later on and really, like the best chocolate desserts, you don’t want to miss any of it.
Grade:  B