I’m over at Dear Author with a review of Witch Please by Ann Aguirre. A bit of a mixed bag for me. 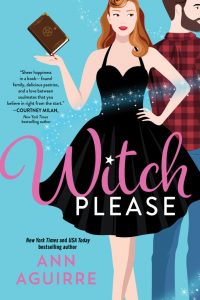 I’m over at Dear Author with a review of Midtown Masters by Cara McKenna. Too much tell, not enough show. 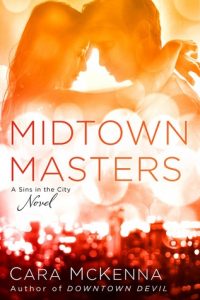 Crazy For Her by Sandra Owens, narrated by Amy McFadden & Mikael Naramore 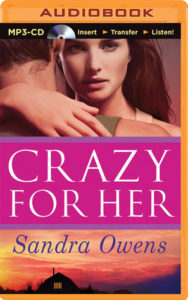 Why I read it:  I listened to Only Her (which I reviewed for AudioGals) recently and I really liked it. So I borrowed this one from my library.

What it’s about: (from Goodreads)  When his best friend and fellow Navy SEAL, Evan Prescott, died in his arms on the battlefield, Logan Kincaid gave his word to watch over Evan’s widow. But for two years he kept his distance…torn between honoring his solemn vow and succumbing to his secret love for his fallen comrade’s wife. But when Dani Prescott desperately reaches out to Logan for the help only he can give, he rushes to her side—determined to fight for her safety as fiercely as he fights against his own buried desire.

Someone claiming to be her husband is stalking Dani and her infant daughter, making them virtually prisoners in their remote country home. Logan’s elite military training and high-risk security expertise have outmatched more dangerous enemies. But the real challenge will be the burning temptation that threatens to overcome Logan whenever Dani is near…especially when she reveals her own hidden passion.

What worked for me (and what didn’t):  Crazy for Her is book one in the K2 Team series. It starts with a prologue showing how Evan Prescott dies in action and eloquently describes the feelings Logan Kincaid, his SEAL team commander, feels about the loss of his best friend. Logan promises Evan he will look after Evan’s wife, Dani and the the baby on its way but then gets shot in the head and recovering from his injury gets in the way.

Off Base by Tessa Bailey & Sophie Jordan 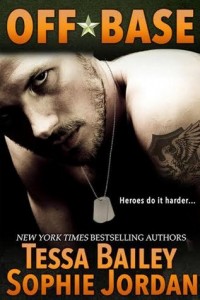 Why I read it:  I saw some buzz about this one on Twitter, including that the hero of the Tessa Bailey book was a virgin, so I pre-ordered it.

What it’s about: (from Goodreads)  OFF BASE: Kenna and Beck By Tessa Bailey

A welcome home he never expected…and will never forget…

When Kenna Sutton is tasked with driving home newly returned Beck “True Blue” Collier, she expects the strategic Army mastermind to be a pasty number cruncher. Never at a loss for words, Kenna is nonetheless rendered speechless by the gorgeous, inexperienced and tightly-wound Army major that lands in her passenger seat. Outraged by Beck’s lack of a welcome home after seven long years overseas, Kenna takes matters into her own hands, giving Beck something he’s only ever fantasized about in his bunk.

Beck has never shied away from a test of will and Kenna gives new meaning to the word challenge. One problem? Kenna’s father is the lieutenant general presenting Beck with the Silver Star and Beck is determined to treat Kenna with the respect she deserves, even if her eyes beg Beck to act out his most secret desires with her. Desires he’s always been told were the work of the devil. But how long can one lonely, starving man hope to resist the woman he craves?

What worked for me (and what didn’t):  While Beck is a virgin, he’s not shy and he’s not reticent. (In my opinion, this is the best kind of virgin hero!)  He had been dating a girl from his hometown who was a pastor’s daughter and they’d decided to “wait”.  When she broke up with him while he was deployed, he didn’t have the inclination to change his status and so he ended up a 26 year old virgin.

Kenna’s mother had a reputation on base as a “loose woman” and it amuses Kenna to dress in short skirts and tight tops but never, ever, put out on base. Her dad is Lieutenant General Sutton and no soldier has been prepared to try his luck with the beautiful daughter of the commanding officer – although they like very much to look.  Kenna gets her itch scratched off base when the need arises.  She has a complicated relationship with her (now divorced) parents.  She has never measured up to their expectations, although she has mostly moved beyond acting out for attention.   When she picks Beck up per her father’s request, she is struck by how strongly she feels about the fact that there are no family or friends welcoming him home.  It doesn’t hurt that he’s built and gorgeous but I think what strikes her the most is Beck’s almost completely successful efforts to look her in the eyes and not look her over. In fact, she makes her best efforts to try and draw his eyes to her chest and behind so he can be neatly categorised as “just like all the other guys”.  It so happens she gives him a special “welcome home”, but the emotional connection between them scares her and she rabbits.