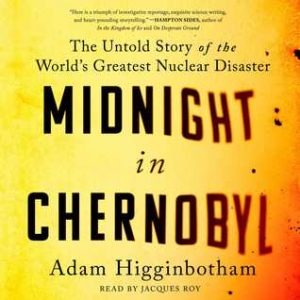 Why I read it:  I’m fascinated by this stuff and @JenReadsRomance recommended it to me (thank you Jen!). I tend to only be able to carve out time for non-fiction on audio so I bought the audiobook.

What it’s about: (from Goodreads)  The definitive, dramatic untold story of the Chernobyl nuclear power plant disaster, based on original reporting and new archival research.

April 25, 1986, in Chernobyl, was a turning point in world history. The disaster not only changed the world’s perception of nuclear power and the science that spawned it, but also our understanding of the planet’s delicate ecology. With the images of the abandoned homes and playgrounds beyond the barbed wire of the 30-kilometer Exclusion Zone, the rusting graveyards of contaminated trucks and helicopters, the farmland lashed with black rain, the event fixed for all time the notion of radiation as an invisible killer.

Chernobyl was also a key event in the destruction of the Soviet Union, and, with it, the United States’ victory in the Cold War. For Moscow, it was a political and financial catastrophe as much as an environmental and scientific one. With a total cost of 18 billion rubles—at the time equivalent to $18 billion—Chernobyl bankrupted an already teetering economy and revealed to its population a state built upon a pillar of lies.

The full story of the events that started that night in the control room of Reactor No.4 of the V.I. Lenin Nuclear Power Plant has never been told—until now. Through two decades of reporting, new archival information, and firsthand interviews with witnesses, journalist Adam Higginbotham tells the full dramatic story, including Alexander Akimov and Anatoli Dyatlov, who represented the best and worst of Soviet life; denizens of a vanished world of secret policemen, internal passports, food lines, and heroic self-sacrifice for the Motherland. Midnight in Chernobyl, award-worthy nonfiction that reads like sci-fi, shows not only the final epic struggle of a dying empire but also the story of individual heroism and desperate, ingenious technical improvisation joining forces against a new kind of enemy.

What worked for me (and what didn’t):  I’m not a scientist and never studied physics in school, apart from what one does in general science. I know about atoms and such but nuclear fission is not something I’d ever taken a deep dive into.

Fortunately, one doesn’t have to have special knowledge to understand the book. The author does a great job of explaining what happened and the science behind it. That said, the science, while accessible, is dense. Unlike other books, I found myself having to concentrate on just about every word and I was often skipping back to relisten to a couple of sentences to be sure I understood. It was one of those books where I figured if I didn’t understand now, I’d get lost later on.

My biggest tip if someone is going to get the audiobook is to download the kindle sample of the ebook. The first thing in the book is a list of the cast of characters – pretty boring to listen to and almost impossible to recall unless one has an eidetic memory, this book has a large cast. I referred back to sample often to refresh my memory of who people were and where they stood within the story. In fact, the sample is also helpful for other things. I find it difficult to understand new-to-me concepts (particularly science/maths-type concepts) when I only listen to them. It’s easier for me to “get it” when I can see the words and mull them over – there’s obviously a part of my brain which is more easily access by the written word than the spoken, at least in certain circumstances. So the stuff about how a nuclear reactor works was really useful for me to read (more than once) to get a better mind map. The terms “moderator” and “coolant” and “cooling rods” were used often in the book and I needed to really embed their meanings in my head to proceed.

The book works on audio but I do think the experience benefits from at least having the sample. I ended up borrowing the hard copy of the book from the library as well. It has some photographs which were good to see and there were a couple of things later in the book I wanted to read again – things that the sample didn’t get to. The hard copy also had a list of footnotes and other end notes which I found really interesting. I guess if someone is really familiar with the science and perhaps also the bones of the story already, maybe the audio only could work, but I really think the experience is better with some written material as well.

The story is fascinating, terrifying and enraging. It made me never want to live anywhere near a nuclear reactor and I did rethink my attitude to nuclear power, which up until then was probably best described as lukewarm. Now I’m a person who thinks it’s too dangerous. What struck me was that even though Chernobyl happened in the USSR with the concomitant political issues which meant that the culture was “don’t rock the boat, always deliver, cut corners to get the job done, everything will be fine” it doesn’t seem a stretch for those same things to happen within a Western culture, where capitalism and money can mean the exact same outcomes can apply. It occurred to me that I have a low level of trust for corporations who produce something so potentially dangerous to tell me the truth about their safety procedures and their training, reactor design and business culture. I also don’t trust the regulators that much – in my day job I’ve seen some pretty terrible safety outcomes. Prosecuting a business after the fact isn’t going to cut it if there’s a nuclear accident. So now I’m on the side of, “until I can be confident that I’m being told the truth and that the safety is robust and resilient, with a culture that supports anyone, even the lowest level employee being able to speak up and be heard I’m just not into it”. Give me solar and wind and geothermal and hydroelectric and fund other renewable energy.

Midnight in Chernobyl combined my interest in science (even though I’m not great at it I am fascinated – just please don’t try and explain quantum anything to me because I can’t get it to make sense), my interest in the law and politics, in safety and health/medical matters and in true crime investigation all in one compelling listen. Frankly I’m assuming the accuracy because I don’t really know any better, but the book references exactly where the author got the information from and it had the ring of authenticity. It seemed like a meticulously researched book but it is not remotely dry. In many ways it reads like fiction but the sad and horrifying truth is that this actually happened and its effects are still being felt and will be for a very long time to come.

What else? The narration was very good. I believe Mr. Roy is a native Russian speaker because his accents were great and there were small sections in Russian (with an immediate translation so there was no confusion to the listener) which sounded to me like they rolled easily off his tongue. He injected emotion into the story without making it a “dramatic performance” per se, mostly letting the words speak for themselves. Even though there were things I wanted to read and see and not only hear, I’m sure I took in the story a lot better because it was read to me – I certainly got through it quickly – far more so than had I tried to just read the book.

One comment on “Midnight in Chernobyl by Adam Higginbotham, narrated by Jacques Roy”