A Fallen Lady by Elizabeth Kingston 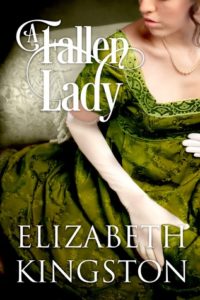 Why I read it:  The book came up in a recent #RomBkLove discussion about unlikeable heroines. Apparently some people thought Helen was unlikeable. I have no idea why. I didn’t find her remotely so.

What it’s about: (from Goodreads)  Six years ago, to the outrage of her family and the delight of London gossips, Lady Helen Dehaven refused to marry the man to whom she was betrothed. Even more shockingly, her refusal came on the heels of her scandalous behavior: she and her betrothed were caught in a most compromising position. Leaving her reputation in tatters and her motivations a mystery, Helen withdrew to a simple life in a little village among friends, where her secrets remained hers alone.

For reasons of his own, Stephen Hampton, Lord Summerdale, is determined to learn the truth behind the tangled tale of Helen’s ruin. There is nothing he abhors so much as scandal – nothing he prizes so well as discretion – and so he is shocked to find, when he tracks Helen down, that he cannot but admire her. Against all expectations, he finds himself forgiving her scandalous history in favor of only being near her.

But the bitter past will not relinquish Helen’s heart so easily. How can she trust a man so steeped in the culture of high society, who conceals so much? And how can he, so devoted to the appearance of propriety, ever love a fallen lady?

What worked for me (and what didn’t): Helen Dehaven has been living in in the small village of Bartle-on-the-Glen for the past six years after scandalously breaking off her engagement after she had clearly been “ruined” by her fiance. It is clear that she was raped by him but that hardly mattered in terms of society’s expectations. Unfortunately Helen did not get any support from her brother, who did not believe her story. So Helen has been fending for herself, using a small trust left to her by her grandmother. It is barely enough for her to live on.

Stephen, Lord Summerdale (he’s an Earl) comes to Bartle-on-the-Glen to find out the truth behind the scandal, on a commission of sorts from her brother. He quickly comes to believe that Helen’s brother, Alex, wants to reconnect with her and is using a business deal as an excuse to do so. It is also clear that Alex’s wife, Elizabeth, is a big factor in compelling action in this regard. Stephen has a reputation among the ton for knowing everything. He can ferret out secrets and know all the gossip but he is not a gossip. He is the epitome of discretion. If he says something is kosher, then people believe him without further explanation, such is his reputation. Stephen doesn’t like gossip but he does have a passion for the truth and the fact that Helen does not want to tell him her story nags at him like an itch which cannot be scratched.

As he spends time with her however, he comes to know her and he falls for her in spite of what he believes about her past. He also makes friends with others in the village, in particular, the delightful Marie-Anne, who is featured in House of Cads, a book I listened to recently.

I admit to suffering some of the same frustration that Stephen did at times. I, too, wanted to know the whole story of what happened six years ago. There are some red herrings along the way which I expect were deliberate and even at the end, I still had a couple of questions, I admit. However, I understood the essentials.

Helen has been badly wounded – by her former fiance, by society and by her brother who abandoned her after she was raped. She slowly comes to trust Stephen and only wants from him that he tell her the truth. She does not wish for him to keep secrets from her.  In typical man fashion however, Stephen does have a touch of “I know best” and in his efforts to look after her and protect her, he bruises her vulnerable heart.

What else? The ending was just a little bit unsatisfactory because what has been done cannot be undone and a resolution necessarily involved forgiveness and compromise which I felt put Helen at somewhat of a disadvantage. However, it was only a little bit unsatisfactory. For the most part, I enjoyed the book very much. I liked the way Stephen saw Helen as a person and who appreciated her for who she was. I liked the deep friendship between Helen and Marie-Anne. I had the benefit of seeing Stephen and Helen some time after the events of his book, in Marie-Anne’s book so I know things were working out excessively well for them and that probably helped me enjoy A Fallen Lady even more actually.

Helen had suffered tremendous trauma and I admired her very much. She was a very resilient, courageous woman and I can’t for the life of me work out why some might consider her unlikeable.

One comment on “A Fallen Lady by Elizabeth Kingston”