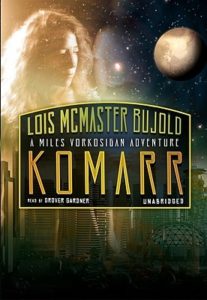 What it’s about: (from Goodreads)  Komarr could be a garden – with a thousand more years work. Or an uninhabitable wasteland, if the terraforming fails. Now the solar mirror vital to the terraforming of the conquered planet has been shattered by a ship hurtling off course. The Emperor of Barrayar sends his newest Imperial Auditor, Lord Miles Vorkosigan, to find out why. The choice is not a popular one on Komarr, where a betrayal a generation before drenched the name of Vorkosigan in blood. In the political and physical claustrophobia of the domed cities, are the Komarrans surrounding Miles loyal subjects, potential hostages, innocent victims, or rebels bidding for revenge? Lies within lies, treachery within treachery – Miles is caught in a race against time to stop a plot that could exile him from Barrayar forever. His burning hope lies in an unexpected ally, one with wounds as deep and honor as beleaguered as his own.

What worked for me (and what didn’t):  I’ve been biding my time, listening to this series in order and determined not to jump ahead to the “Miles romance” books. Komarr was my (first) reward. It is here Miles falls in love with Ekaterin Vorsoisson, who is, when they first meet, married to the Terraforming Administrator of the Serifosa Sector in Komarr. While, by the end of the book, that no longer represents an impediment to Miles because reasons (and not cheaty reasons either), this is not the book where Miles gets his HEA either. (That is the next one: A Civil Campaign.) There are sniffs and hints of Ekaterin beginning to have feelings for Miles but, for many reasons, it wasn’t the right time or place for that to be fully explored. It makes sense and it satisfies but, at the same time, I could not resist immediately starting A Civil Campaign after I finished Komarr.

There is plenty of Ekaterin’s POV in Komarr – in fact, it is here the book begins. The listener gets to know Ekaterin from her own perspective and not only from Miles’. Miles does tend to fall in love fast (and often) so I was glad to have Ekaterin’s side of things and to learn about her outside of Miles. It’s a signal (not that I needed it particularly) that Ekaterin is IMPORTANT and, perhaps it helps the listener to consent to the relationship developing between she and Miles, as more than a fling or a passing fancy.

The adventure plot revolves around an apparent accident in the space around Komarr – a freighter crashed into a solar mirror (which I gathered to be a kind of fake-sun), causing the deaths of those in the immediate vicinity and significant damage to the mirror. Emperor Gregor has sent two Imperial Auditors to investigate – Lord Vorthys (Ekaterin’s uncle) and Miles Vorkosigan. Ekaterin becomes intrinsically involved in the investigation and the resolution of it in somewhat surprising ways and Bujold uses these events as a way to comment on the role of women in society and other feminist issues.  (I just know Cordelia will adore Ekaterin.)

Ekaterin is also dealing with a difficult marriage to a difficult man and his genetic disease which has started to manifest itself. A cousin to Parkinson’s Disease perhaps (although specifically not related in the book), the disease is evidence of a mutation which shames Tien Vorsoisson so much that he is desperate to keep it a secret. This puts their nine year old son, Nikolai, at risk because he has the same genetic mutation. Miles, being someone who appears to have a genetic mutation (but who actually does not, his deformities being tetragenic as a result of Saltoxin exposure in utero) is uniquely placed to inspire thought in Ekaterin and answer questions for her. Tien looks “normal” but is “flawed”. Miles looks “flawed” but is “normal”. It is an interesting juxtaposition and another social commentary in itself.

I didn’t find the social issues overwhelmed the plot at all and was caught up in the story and adventure of the tale pretty much from the start. Unlike my complaint in Memory, Komarr set a cracking pace from the beginning and didn’t really let up. This is more the kind of story I prefer.  Plus, there was a sniff of romance (a romance I know leads to a HEA) so I was inclined to be invested anyway.

What else? Grover Gardner does his usual stellar job. I love the way he delivers the irony and humour of the plot. He has the advantage of having narrated all the earlier books and there is a wealth of character experience built into his performance.

Komarr isn’t as romantic as Shards of Honor – it couldn’t have been really because Ekaterin is married to Tien at the start and the timeframe of the story is fairly short. But in itself it is another great story and rates very highly in my personal ranking of the Vorkosigan saga.