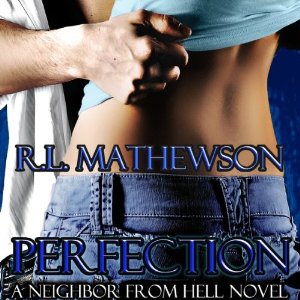 Why I read it:  I received a review copy from Audible Studios.

What it’s about: (from Goodreads)  Zoe is used to taking care of herself and has long ago accepted that if anything bad was going to happen, it was going to happen to her. So when she loses her job over something most bosses would probably be happy with and her life starts going downhill from there, she doesn’t expect it to get any better.

She certainly didn’t expect any help from the loud jerk next door, but then again she has nothing to lose so puts her trust in him and hopes for the best. What she didn’t expect was the once in a lifetime opportunity that he offers her through an arrangement where they both benefit and no one is supposed to get hurt – but she should have known better because her luck has never been that good.

Like most Bradfords, Trevor has a soft spot for food, but that’s about all. He leads a pretty straightforward life and likes to keep things simple and that includes his relationships. He wants the perfect woman and knows exactly what she’ll be like. So when he discovers much to his horror that he’s thinking about his frumpy little neighbor he decides the best way to get his head straight is by working her out of his system. He’ll keep her around, but only until he finds perfection.

What worked for me (and what didn’t):  I admit I DNF’d the first book in this series. I downloaded the ebook but I just couldn’t get behind the superior asshat quotient of the hero. I suspect it may have been the same for me here had not picked the audio format. Trevor is a complete dick. He’s good looking, muscular, relatively wealthy (he owns a number of houses which he rents out) and women fawn all over him wherever he goes. He thinks he treats women with respect, but really, he doesn’t. They’re temporary playthings until Ms. Right comes along. Because of childhood insecurities, he’s convinced himself his perfect wife is comprised of a list of very set criteria and he’s decided he won’t settle for less.

Zoe grew up in foster care. She’s worked hard to get a good job and make something of herself, but when the book begins, she gets fired from her job for exposing a fraud. The kicker is that the fraudster is her supervisor’s wife. She’s recently moved into an apartment created from half a townhouse. There are a lot of strict rules but the place is nice and affordable. However, after losing her job, it looks like she may not be able to stay there. Her car is a rundown POS and, to top it all off, her neighbour, Trevor, parks in the middle of the two spots which means she has to leave her car on the street, he steals her laundry powder, uses all the hot water in the shower and, in his piece de resistance to cap a crappy day, he steals her pizza!!  Zoe’s had enough. She goes off and tells Trevor how it really is. Trevor doesn’t help matters when, in the heat of the argument he refers derogatively to her size (Zoe is overweight).

Trevor is a jerk but he’s not completely without a conscience. The next morning, he apologises and offers to help her find another job. As it happens, his uncle’s construction business is looking for an office manager and Trevor himself could use someone to clean and shop for him.  Zoe accepts and there begins a tentative pseudo-friendship.

After Trevor’s hurtful remarks, Zoe goes on a strict diet but even before that has much of an effect, Trevor finds himself thinking about Zoe’s round butt, curvy hips and bodacious breasts. He doesn’t understand it; she’s not his type. She’s not ugly but she’s not pretty really either. She’s kind of plain and frumpy.  But he can’t stop thinking about her.

After Zoe loses some of her weight, she decides to try her new body out on a guy she intends to pick up in a bar and see if it’s a humiliation or whether her body is “good enough”. Of course, this is a terrible way to think but I figure it’s pretty realistic all things considered. Zoe doesn’t want to get into a relationship with someone she cares about only to be crushed by the dude being grossed out by her naked body so she figures a stranger will be the best option. Trevor, however, is not keen on this plan and decides to play knight in shining armour to save her from the sleazoids who want to take advantage of her.

The upshot of all of that is that Trevor suggests an “arrangement”. They will use each other for sex whenever they each want it, but they won’t have a relationship. They’re not dating. They don’t tell anybody about it and there are no PDA’s. They’re exclusive until one of them calls off the arrangement. And then, they proceed to have copious amounts of wall-banging, earth-shattering sex over the next few months.

Predictably, Zoe falls in love with Trevor (I mean, this is a romance, after all) but she never deludes herself their arrangement could ever be anything more. Trevor is full of self-delusion. In fact, he most often does the right thing for all the wrong reasons. Or, he uses the wrong methods to achieve a good goal (but which he internally classifies as a goal which suits him). To say he lacks self-awareness is an understatement. And it is mostly this lack of self-awareness that makes the humour in the story. On the face of it, Trevor is a dick. But when you actually boil it all down, he does look after Zoe. He cares for her, helps her get another job, gives her many, many great orgasms, fixes her car, makes her laugh and worries about the effects on her health of continued dieting.  His reasons for most of this behaviour are far from noble but it becomes clear that he, too, has fallen in love. Even if it takes his cousin to actually make the diagnosis.

There is also lots of humour about the Bradford family and their obsession with food and how they’re kicked out of all-you-can-eat buffet restaurants and takeaway places have banned them from deliveries.

The asshat lacking self-awareness is clearly a running trope in the series. Jason (the jerk from the first book), when he is first introduced into Perfection, is busy trying to get his very pregnant wife fired for “sexual harassment” because he’s worried she’s working too hard and wants her to stop working and rest before the new baby comes. It’s actually pretty funny because his dad (Trevor’s uncle, who owns the construction company) is having none of it.  But every day, Jason tries to get his wife fired for her own good, regardless. (It’s a pretty broad kind of humour and perhaps one has to be in the right mood for it to really tickle the funny bone. It so happened, I was.)

Ultimately, Trevor falls for Zoe and genuinely finds her beautiful. He loves her body and prefers her curvy. He thinks she has great hair and a pretty face and he loves all that is on the inside of her as well. He’s completely faithful and devoted and not interested in even looking at other women. Of course, the way he chooses to demonstrate this is… shall we say unusual?

Zoe herself is smart and funny and she doesn’t take crap from Trevor. If she’d been a doormat, I probably couldn’t have managed Trevor but Zoe is anything but a doormat. Trevor uses some pretty underhanded tactics at times (shutting off the heat in her apartment to get her to come to his place for example) but by the end of the book Zoe sees these antics for what they are and finds them hilarious. In Trevor, Zoe finds someone who loves and adores and her and in the Bradfords, she finds a family she thought she’d never have.

What else? I was actually pretty impressed by the narration. Ms. Jules did a more-than-reasonable hero voice and had great expression and emotion in her voice at the right times. Her pacing was good and the production clean and crisp. There was one mistake I spotted – when she said “three years” instead of “three weeks” (or was it “three days”? Hmm. I forget) and for a second there I got really confused, thinking there’d been a massive flash forward in the story, but otherwise, it was all good. Because Trevor is such a jerk, Ms. Jules really needed to have the right tone and affect  to demonstrate that he often says the wrong thing and does the right thing for the wrong reasons, but it’s because he’s fooling himself more than anything. And I think she pulled it off. So, kudos.