Games of the Heart by Kristen Ashley, narrated by Rachel Fulginiti 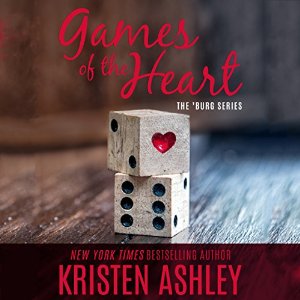 Why I read it:  I received a review copy via Audible Studios.

What it’s about: (from Goodreads)  From the balcony of his house, Mike Haines can see the quiet, commonplace beauty of the Holliday farm. But what he remembers is the little sister of his high school girlfriend, Dusty, who grew up there. As a teen, Dusty had gone off the rails but when she was a kid, she was sweet, she was funny and she had a special bond with Mike. But after high school, she took off and Mike never saw her again.

Then tragedy strikes Dusty’s family, she comes back to town and Mike thinks she hasn’t changed back to the sweet, funny girl he knew but instead continued to be selfish and thoughtless, leaving her family alone to deal with their mourning. So he seeks her out and confronts her in an effort to understand what went wrong and to force her to sort herself out.

He finds out quickly he’s wrong about Dusty Holliday. Very wrong. And right after Mike discovers that, the bond they had years before snaps back into place in ways he would never suspect.

But Mike Haines had a bad marriage then he played games of the heart for a good woman. And lost. In order to protect himself and his kids, he’s cautious, he’s careful to read the signs and he’s not interested in finding a woman he has to fix.

Then he learns what happened to Dusty and he thinks she needs to be fixed. He swings, he misses and in this new game of hearts, for Dusty, Mike just got strike three.

What worked for me (and what didn’t):  When I read At Peace at while ago, I enjoyed the character of Mike Haines. Kristen Ashley has written a few books now where there has been a kind of love triangle. I say kind of because it is always clear who the prime couple is – In Mystery Man, the couple were Hawk and Gwen, and Tack was the one who missed out.  In At Peace, it was Joe and Violet and Mike was the guy who didn’t get the girl.  Tack, of course, got his HEA with Tyra in Motorcycle Man and now Mike gets his HEA with Dusty.  I liked Mike in At Peace. He was a nice guy who really cared about Violet and, if not for Joe, she probably would have had a happy life with him. They could have made it work and they had genuine feelings for each other. Generally, I’m not big on love triangles because either one of the guys (usually it’s two guys and a girl) is a dirtbag or both of the guys are great and one has to miss out.  What I really like about the way Ashley does it is that I know that there will be a book for the other guy at some point, that he will get his HEA and that he is a good guy and the feelings he has for the heroine (and hers for him) are respected – even by the hero who ends up with the girl.  This seems unusual to me and, apparently, it means that I can enjoy the love triangle as a way of showing more love for the heroine, as showing she is “worthy” of love and that she is in demand, without getting too bent out of shape that she will end up with the “wrong guy” or that the “other guy” will be pining away for the rest of his life/turn into a jerk. Also, the love triangles don’t drag on too long and that helps.

Anywho, after reading At Peace, I wanted to read Mike’s book but it’s taken me a while to get around to it. Another of my friends, didn’t like this one all that much and I suppose that influenced me a little to bump it down the TBR.  As it happens, I really enjoyed Games of the Heart. It is definitely a book for HEA lovers. In many respects, Dusty and Mike are happy together for much of the book – certainly by about 1/3 of the way in, they are in love and moving ahead in their life together. This book details the way a lot of their problems are solved – most of them are not problems between the couple, but from external influences. So, it’s like a book full of HEA, with the focus on the after and on the how they are happy ever after. For me, that’s like, the chocolate cake of romance.  I’m all about the HEA and I don’t get tired of reading about a happy couple together so long as something interesting is going on to propel the story. I liked the way Dusty and Mike navigated the problems with the family farm and how Dusty got to know Mike’s kids and be a great friend and awesome stepmother to Clarice. I liked watching the burgeoning relationship between Fin and Clarice (it was like a bonus romance in a book full of happy).

Mike can be a bit of an alphahole sometimes but Dusty and he negotiate and their relationship works for them. Even his more alpha tendencies are explained in the text. Dusty understands what drives Mike and she likes and appreciates that.

There was a bit of surprise angst toward the end so that will teach me for being a bit complacent I suppose. The action of the story doesn’t really fade – it has peaks and troughs of course but I never found it boring. There was a long epilogue which showed even more happy. I’m kind of used to long epilogues from Ashley these days and I’ve come to appreciate them. Frankly, I’m just so entertained by the story and the characters, that spending more time with them is a feature for me, not a bug.

The romances I tend to like best are ones where the main characters get together quickly (in the sense of sharing space) and spend a lot of time together and Games of the Heart was all about this so I was a pretty happy Kaetrin.

What else? All of the Burg series books have a different narrator. This is somewhat unusual but so far, I have to say, it’s worked. I’m happy enough when a good narrator reads an entire series but, somewhat to my surprise, changing narrators can work just as well, possibly better. Each book features different characters and having a different narrator helps to immediately change the focus from one book to another. It’s easy to tell this is someone else’s books because the characters don’t sound the same. Even the best narrators tend to have a go-to “hero” voice or “heroine” voice and, particularly if one listens to a series one book after the other, the characters start to bleed into one another.

The best part about the way the Burg series has been produced is that the narration has been solidly good.  I had a few minor criticisms of Brian Pallino’s intensity which at times became a little wearing, but really, the narrations, all from new-to-me performers, have been great.  And this one is no exception.  Rachel Fulginiti has a vaguely New York accent which, even though the book is set in Indiana and populated mainly with people who’ve lived there all/most of their lives, works well. She doesn’t have a super deep voice for the male cast but, through tone, pitch and affect, she differentiates all of the characters very well.  Ms. Fulginiti understood the syntax and cadence of Kristen Ashley and I found myself relaxing into the story very quickly. I felt in safe hands with her interpretation of the characters and it was pretty much a delight to listen to.

How much of my enjoyment was purely as a result of the narration is difficult to say of course, but the end result was definitely a win.

2 comments on “Games of the Heart by Kristen Ashley, narrated by Rachel Fulginiti”