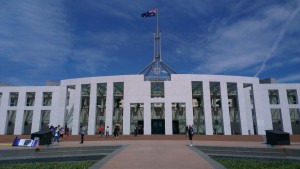 From Friday 6 March to Sunday 8 March, I was at the Australian Romance Readers Convention (ARRC) in Canberra.  It was my first romance convention and exciting, exhausting, fun and challenging all at once.   Because I’d never been to an ARRC before, I didn’t really know what to expect.  Technically, I was on the Organising Committee (I’m a member of ARRA – the Australian Romance Readers Association and on the Executive Committee also) but my role was “Sponsorship Coordinator”, which sounds fancy but really involved wrangling the massive sponsorship spreadsheet of doom and emailing loads of people about stuff, so it’s not like I can actually take any credit for how it all went or anything.

I have to say the organisers went above and beyond.  Because I was involved a little bit behind the scenes, I know something of just how much effort went into it.  I guess I spent about half the actual convention helping organise things and doing volunteer stuff but basically, I just did what I was told and went where I was needed.  The organisers had their fingers on so many pulses at once; I’m just staggered by their achievement.  This is a volunteer organisation and I shudder to think just how many woman hours went into arranging ARRC.

The event kicked off with a Welcome Reception on Friday night – I was on the door for a lot of it welcoming people and making sure there were no gatecrashers.  After a while another volunteer relieved me and I went and started talking to some people I’d talked to online but had not met in person before, others I met at the ARR Awards last year in Sydney or elsewhere and some I had never met before at all.  This latter group is the most challenging for me.  I’m not great at small talk and I’m always worried I come of snobby because I tend to stand back rather than be considered an intruder.  Still, because there were other people I knew in the group and I wasn’t responsible for much of the conversation, this eased me in and probably worked out better for everyone.

After the Reception, we had the Trivia Night.  I’d been up since 4am that morning to catch the plane Canberra from Adelaide so it’s fair to say I was flagging a bit by then.  However, mimosas and sleep deprivation do seem to improve my social skills and I met some fun new people on our table and added to my list of friends.  We came second (not too shabby!) and there was much hilarity.  After that, there was cake in a friend’s room but alas no karaoke because reasons.

The convention itself began on Saturday morning – early.  I’m not a morning person and weekends are generally for sleeping in so this was a change from the usual.  I was busy doing organising-y stuff for most of the morning so unfortunately I didn’t get to any panels but I did catch a bit of the Tribal Law book launch.  Shannon Curtis always makes me laugh and her presentation proved I’m not the only one in this category. And, I was able to slip into the back of the “Beyond Firsts: Why We Need NA” panel which I found some new authors to try and Kylie Scott gave us a few details of her upcoming series. I was also lucky enough to score a seat at Kelley Armstrong’s morning tea table and, predictably, I spent most of it trying not to put my foot in my mouth because: starstruck. (She is lovely by the way). 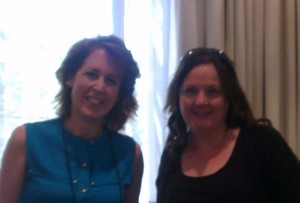 Me and Kelley Armstrong. Notice I was carefully keeping space between us so as not to be a creepy stalker type.

After lunch I sat in on Alpha Hero Poker with Kelly Hunter.  Author Annie West was the dealer at our table.  We played five card draw – but we only got two cards then we had to answer questions about alpha heroes to get the rest.  At the end of each game, the winner got to choose a book as a prize.  Kelly Hunter collects playing cards and the ones at our table were “Mr. Darcy: breaking hearts since 1813” and they were the prize for the very last round (which I, alas, didn’t win).  In between playing, I got to chat with Annie and other readers and it was a lot of fun in a fairly low-pressure environment.

After that, I was in the Bloggers Roundtable run by Kat Mayo.  It was great catching up with other bloggers and talking about what we do, what we’ve learned and how we can make things more streamlined.  I’d love there to be more time for this kind of thing next time.

Then I was helping set up the Book Signing Event.  We had something like 90 authors at the signing and Harlequin generously provided free books so we had to stack those up on all the author tables and then move the other books (which were being sold by Dymocks Canberra) to the rest of the author tables.  We were like ants on a picnic but we were ON TIME!  The author signing was amazing and it seemed like everyone got to meet their favourite authors and have a book signed.  I even got to take a pass through the room toward the end.

After the book signing I was off to get ready for the ARR Awards dinner – the theme was Roaring Twenties.  Because of my lack of hand/eye coordination, Ainslie Paton helped me with my hair – see? (Thank you so much Ainslie!)

back view. You can’t tell but there are approximately 1324 pins in there. 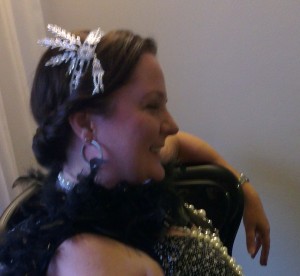 me, with all the bling.

and then it was down to the ballroom where the bling was out in force. There was so much sparkle and loads of people got dressed up so it was huge fun. 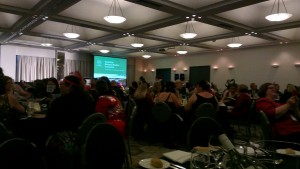 Kylie Scott sponsored a photo booth and I think most people got some happy snaps of the night. 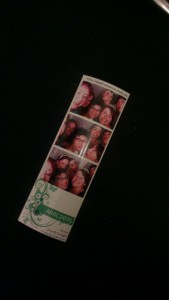 On Sunday I was able to attend a couple of panels – I really enjoyed the “A Rich Man’s World panel” where billionaire romance was discussed.  Sylvia Day, Kelly Hunter, Melanie Scott and Sofia Tate, as well as the “Romantic Destinations” panel.  I also caught a little of the “Rocking Our World” panel where rock star romance was the hot topic but the highlight of the morning was Victoria Dahl‘s keynote speech.  I already enjoyed her Twitter presence but fell into true fangirl love after seeing just how lovely she was with everyone and hearing her speech which was all about female acceptance and empowerment.

After lunch, with my fingernails bitten to the quick, I moderated my own panel, “Out of the Closet – Why Queer Romance is for Everyone”.  There were book recs and Riptide Publishing generously provided download codes for five free books to all who attended.  We covered some heavier topics – being careful about being sensitive to marginalised groups and some not to serious things – interesting research.  I’m fairly confident the panel didn’t suck and that was mostly down to the authors who were with me – Shona Husk, Lexxie Couper, Ellen Cross and Tamsin Baker.  Thank you ladies!

The convention ended with the keynote address from Sylvia Day.  She’s a fascinating lady with a wonderful ease and talent for public speaking and it was a great end to a fun convention.

The two and a bit days were busy busy with constant activity and lots of socialising.  The QT Canberra did a great job with the venue and catering – the food was just excellent and there was plenty of it – and the panels, speeches and other activities were all lots of fun.  Perhaps best of all was the socialising.  I don’t consider myself a social butterfly at all – mostly I usually feel very inept but I was welcomed with friendly smiles by people I knew and ones I hadn’t met before and I felt like I grew existing friendships and made new ones – all of which will continue online until we can meet up again at the next thing. 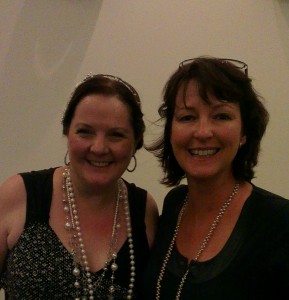 Me and Kelly Hunter at the ARR Awards Dinner. Notice that by this time personal space was not an issue. I blame the wine.

I won’t try and name everyone because I would be sure to miss someone important out accidentally so I’ll just say thank you to all the wonderful people who helped make my ARRC experience so much fun!

*all photos my own