The Will by Kristen Ashley 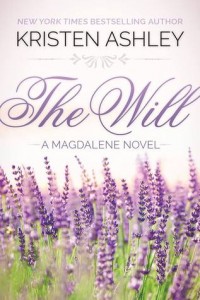 Why I read it:  I bought this one as soon as it was out because: Kristen Ashley and also various of my reader friends who’d read early copies were saying good things.

What it’s about: (from Goodreads)  Early in her life, Josephine Malone learned the hard way that there was only one person she could love and trust: her grandmother, Lydia Malone. Out of necessity, unconsciously and very successfully, Josephine donned a disguise to keep all others at bay. She led a globetrotting lifestyle on the fringes of the fashion and music elite, but she kept herself distant.

While Josephine was trotting the globe, retired boxer Jake Spear was living in the same small town as Lydia. There was nothing disguised about Jake. Including the fact he made a habit of making very bad decisions about who to give his love.

Even if she had to do it as her final wish on this earth.

What worked for me (and what didn’t):  I haven’t had the same problems with the two most recent Ashley books that others have had.  That is to say, I’ve liked them well enough.  Sure, they weren’t Motorcycle Man but I found things in them to enjoy.  That said, this book was a welcome return to form.  The story was long – over 400 pages and the romance was a kind of slow build. The sexual tension was always there but it took a while before the couple became intimate and they got to know each other (even though Jake already knew a lot about Josie, spending time with someone is different) in that time so the romance felt stronger to me.  I loved Jake’s kids – Conner, Amber and Ethan and I loved Amber’s besties, boy Taylor and girl Taylor.  (Seriously, they were hilarious). There were some great things in the book – including some good messages about self-worth combined with loads of humour and affection of various kinds.

That said, there were also some disappointing things – mostly typos and some sentences which just didn’t make sense no matter how many times I read them.  Sometimes, if I read a section again, it will come together, but after a certain number of times, it’s just never gonna happen.  The typos bothered me because they just didn’t need to be there and I feel it will keep readers away who might otherwise appreciate the story.  Some readers don’t like Ashley’s voice and that’s fine – that’s a matter of personal taste and everybody’s different.  But good spelling is something I feel every reader deserves and it is really only with Ashley that I’m prepared to make an exception and keep reading – but it doesn’t mean I like it.  The only other thing I didn’t love was a piece of advice Josie gave to Jake about a girlfriend problem Conner was having – while it might well be something we might secretly want, it made me uncomfortable to think of it as planned and hoped for. That said, to his credit, Jake chose not to pass that information on, at least not at first.  In the end, I took it to mean that Josie wasn’t actually perfect and given that pretty much all of the rest of the time she was, this was probably a feature not a bug.

I suppose the set up with Josie being “bequeathed” to Jake was a weird one but I was prepared to go with it for the sake of the story and no-one pretended it was in any way legal.

It took me a while to warm up to Josie – she speaks in a particular way which is somewhat unusual and prissy (and she really likes the word “alas”). I never hated her but I didn’t fall instantly in love either. For that reason, I’m not sure this would be the best KA book to start with.  I will say that by about 40% in all was forgiven and I thought Josie was THE BOMB.  This happened at the football game when she gave a marvellous and scathing set down to a young man who completely deserved it.  It included this:

“You see , a woman who knows herself and her worth knows that her time is valuable and her heart is precious. She doesn’t give either to a man who can’t respect the gifts he’s being offered.”

I am 100% serious when I say I wish someone had told me that when I was a teenager.

Boy Taylor is gay and she had some words of advice for him too:

“Well, I wish I had some sage advice for you, young Taylor, but alas, I don’t. Small-minded fools are everywhere and those with the courage to be who they are often have to suffer them. It’s your lot, I’m afraid. But at least you can rest in the knowledge that you are true to yourself knowing they live in a narrow world, a narrow world is a barren world while yours is vibrant, and that’s their lot.”

While the main characters in the story were white, there was some diversity in the book – girl Taylor is Asian American, boy Taylor is gay and one of Josie’s good friends is a black rap star.  Each character had some depth to him/her and I felt they weren’t just tokens in the story.  There is also class diversity – Josie moves in high class circles but she’s just as happy to hang out with Jake and his kids watching Sunday football eating Ro-Tel dip (once she knows what Ro-Tel dip is of course – and as an aside, I wish they sold Ro-Tel here. Also jars of chocolate fudge sauce, but I digress).  She also becomes good friends with Alyssa who is loud and swears a lot – something Josie isn’t really used to (even though she’s friends with a rap star) but Josie likes her and accepts her as she is. I’m no expert on diversity but it seemed to me that some effort was made here and I appreciated it and it felt authentic within the story. Josie is both kind of a snob and not – she has a bit of a revelation during the course of the book that she should actually try something before dissing it and I liked that about her too. (I also feel similarly about mornings and workouts as it happens).

Although there was much I would do with Jake Spear just to be with Jake Spear, for instance, watch football while partaking of a dip that was made from Velveeta and, say walking to the ends of the earth and jumping off hand in hand, working out was not something I wished to do with Jake or… ever.

Jake is an alpha hero and not untypical of KA heroes, but he was toned down a little.  He’s still pushy but he’s also very sweet and a good dad who loves his children and he fell hard and fast for Josie (there’s more to that of course, but that comes down to Lydia’s will and it’s best to find out all the details as the story unfolds).   I had wondered whether the “secret” Jake was keeping was going to be good enough to warrant the build up and to my happy surprise, it mostly was.  It made sense and it made Jake even more wonderful because: reasons.  (That said, he should have told her before he did – but no-one’s perfect, right?).

The villain of the piece is kind of one-note – I had thought maybe he would be another series hero but it became quickly clear that’s not going to happen anytime soon but it did give Jake some opportunities to let rip with classics such as this:

“Christ, honestly?” Jake asked. “I told you she’s not into you. Do you seriously think your dick is that big?”

Jake clearly had the hots for Josie from the start

And he liked that dress a fuckuva lot but he’d like it more on the floor by his bed.

but he also could control himself, which I appreciated too.

He had no idea how he was going to have dinner with her wearing that dress without dragging her to his truck then taking her back to Lavender House and probably fucking her on the floor of the foyer.

Then again , when she’d walked on her classy high-heeled boots, wearing her classy shades, that scarf blowing in the wind yesterday, he’d thought the same thing and he’d managed it.

He’d do it again.

I felt the book struck a nice balance between “I want to rip your clothes off” and “But I’m not going to do anything without your full consent because I’m not a dick”.

There were plenty of laugh out loud moments in the book for me and, apart from the bit where I cried (because: wuss), I spent most of the book with a smile on my face.  The part where Jake explained the various uses of “babe” to her was classic KA.

“Okay,” he replied, then commanded audaciously, “Now shut up and sleep.”

My eyes narrowed. “Telling someone to shut up is rude.”

“And ordering an adult to sleep is preposterous,” I went on.

“Is that your response?” I asked.

“No, my response is, babe, shut up and sleep but I already said that so I condensed it to just babe ‘cause that’s easier to say and might not piss you off.”

“You’ll learn to read my babes.”

Annoyingly, I was looking forward to doing that.

What else? I loved that the hero and heroine were older and I loved the way Josie was folded into the community, into Jake’s family.  I loved that Jake thought about things like when it was okay for Josie to sleep over and about talking to his kids about it first.  Poor Jake was having trouble coping with a teenage daughter dating – which was hilarious and sweet at the same time.

But Jake was exercising a father’s prerogative and reserving judgment on {redacted} and would keep doing that shit until they broke up or, God forbid, had their first kid in at least ten but hopefully more like twenty years.

I also loved that it seemed that the evil-ex wife (Donna – Jake’s had 3) appeared to be somewhat redeemed by the end of the story.  I wonder if she might be a heroine in a future book?  That would be interesting. Hmmmm.

It’s a longish book (for a romance) so there was plenty of time for character development and I felt the benefit of that as I read. That said, the things that were in the book for the most part, felt like they belonged there.  The way Josie visited Eliza showed her character and also had impact on the plot for example.

This book had all the things I like about a KA book, with only a few of the things I don’t.  In the end, I felt the benefits vastly outweighed the negative.  Here’s another example of why I thought so.

“I am aware that I have a uterus but I’ve not known that ever to interfere with a woman’s ability to speak English or deal with a variety of situations, including stressful ones.”

Tagged with: contemporary, Kristen Ashley
Posted in: B reviews

2 comments on “The Will by Kristen Ashley”