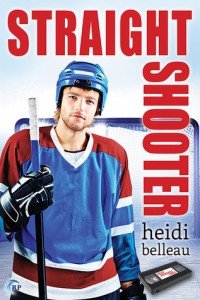 I think I was hindered by the fact that I haven’t read the earlier books in the series so I didn’t know the characters and the set up.  There wasn’t a lot of exposition in the beginning to enable me to orient myself within the physics of the story. I suppose those people who have read the earlier books would appreciate its absence though. It is also somewhat unusual for a romance because the other main character doesn’t really enter the story until well into the book. The story is told from Austin’s deep third person POV and Liam (the other main character) had to be interpreted through the prism of Austin’s perceptions and what he shared with the reader. It does fall squarely into New Adult though because in many ways, it is a coming of age story for Austin.

Austin is struggling with his sexuality.  He identifies as straight but finds himself getting turned on at mostly inopportune times by such things as the trash talking of his team mates – who call him a “faggot” or a “pussy” (I didn’t get the sense that he was necessarily being singled out by this talk – my perception was that it was commonly used to various people on the team).  Austin shares a house with, I think, 3 other guys, two of them are gay and the other is queer-identified.  I haven’t read the books so I may make a hash of the terminology. Apologies in advance if so.  I’m very happy to be corrected in the comments.  Rob – who now wants to be called Bobby – is, (I think) gay, but he likes to wear makeup and some women’s clothes as well as some men’s clothes. I guess he’s gender-fluid? This has been a fairly recent occurrence and it has made Austin very uncomfortable and has caused friction within the house.  He is told to improve his attitude within a month or get out. He (Austin) knows that if he’s kicked out of the house he will most likely also lose his job at Rear Entrance Video because (I gather) the house and the shop are owned by the same family.  Rear Entrance Video is a queer adult store and I understood that it had previously been a “regular” adult store but also fairly recently, it had begun to specialise in queer porn.  This is another challenge for Austin but he realises he’s got to deal with his issues somehow or risk being homeless.  Living with teammates from the ice hockey team wouldn’t work because of the inappropriate bonertude so he’s got to fix things where he is.

He decides to do this by watching some queer porn in a kind of desensitisation therapy. He’s most attracted to the “Straight Sub” series where Mistress Titania gets an unwary straight sub to sign a contract which gives her free reign over him and then she hands him over to Master Puck (who is Liam Williams, the other protagonist).  Master Puck dominates the straight boy and this includes some humiliation which turns out to be right up Austin’s alley.  Liam and his business partner Lalita, run Mischievous Pictures and when Liam comes into Rear Entrance Video for promotional reasons, Austin is even more attracted.

Austin continues to vocally identify as straight but he nevertheless ends up asking Puck/Liam to dominate him.  They end up doing scenes and through this, Austin is able to fix his boner problem and reconnect with Bobby and his other housemates.  Austin clearly has very strong feelings for Liam but it was difficult to know exactly what Liam was thinking. Partly this was because of the deep third person POV and partly it was because he wasn’t in the story a lot.  It was very much Austin’s story but it made it somewhat problematic for me in terms of romance.

Quite a few of the scenes Austin and Liam do together are summarised quickly and this meant that I had less opportunity to observe Liam in action so to speak. It wasn’t really so much that I wanted more sex scenes, it was more that I wanted more Liam and that’s where he mostly was.  It was only when Liam was present in a scene where I had any hope of getting to know him. I gleaned some of his thoughts and feelings from the dialogue but I would have liked more. I couldn’t really see why Austin and Liam fell for one another (even though I’m not precisely sure that’s what happened because they “label” their relationship in a way I’m not familiar with really).

So that sounds fairly negative I suppose.  But, I didn’t dislike the story. For me it didn’t work well as a romance but I’m glad I read it. I have many questions about the… gay-straight spectrum. I’m fairly un-learned about a lot of it and I can’t say I understood it all in the story. But I’d like to know more and reading fiction such as this is generally how I begin to do so (that’s what happened with m/m romance for me and then BDSM romance etc)  I’m no expert on either, but I have learned many real world things in the safe space of fiction. I’ve been able to be… unguarded.  I can challenge my thinking and open my mind to new things and become more tolerant and open generally.  And, now, through various friends I’ve met online, I can ask questions about things without being too offensive.  Because if you don’t know anything about not-straightness (which up until not all that long ago, was me), it feels pretty much like any questions one comes up with are going to come off ignorant and rude.

So, I appreciated this book, even if I can’t say I completely understood it.

Like Austin, I am a person who likes labels. I’m a planner and I like things in their neat little boxes.  I like things tidy.  Colouring outside the lines is not “tidy”.  Austin, by the end of the book learns that untidy is fine.  I haven’t gone on his journey precisely but I did read about his, so I feel I’m a little closer to understanding something I didn’t understand before.  I think I’m likely to remain a person who likes tidy boxes and labels – but this might mean I need to come up with new boxes and new labels, not necessarily fit someone or something into a place they don’t fit (that’s not “tidy” either).  So, I guess, to continue the metaphor, I’m creating new boxes and labels for my own use by reading fiction such as this.

I felt a little like a girl with her face pressed up against the glass and a little frustrated at not being able to get close enough to truly get it (and thus hit my head a few times – does anyone other than me ever do that?).  I would have liked more of Liam and Austin together to understand their dynamic better.  They seem to be in love at the end. But they’re not boyfriends.  They’re Master and boy. That’s something different but I’m not quite sure what.  Austin isn’t gay and he doesn’t want to identify as bisexual either (Liam does identify as bisexual).  I had a bit of trouble parsing how Austin could be both disgusted and adoring, how he could find something “horrible and humiliating and also right”.  Those words don’t go together in any box or label I currently have.   While I think the subject itself is too big for any one book to provide all the answers, I did wish I had spent more time with Liam and Austin together – I think then I would have a better handle on some of the things I’m still at sea about.

There were concepts in Straight Shooter which were new to me and/or outside of my comfort zone but I appreciated a lot about the book. I think it works better as a coming of age story with a romantic arc than a romance though.

I’m not sure whether or not I ought to be ashamed to admit this – I thought I was going to get a sexy, kind of naughty, out-for-you kind of story.  While there was plenty of sexy (and some things which made me a little uncomfortable because: Mrs. Vanilla), I got much more than I bargained for.  While there is some humour in the book, it’s not a light-hearted story. It’s much deeper than that.  Not bad, just different. And we can all use some of that.