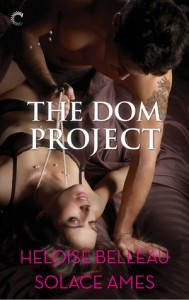 Why I read it:  Jane from Dear Author recommended this one on Twitter so I bought it.

What it’s about: (from Goodreads)  By day, Robin Lessing has a successful career as a university archivist. By night, she blogs about her less-than-successful search for Mr. Tall, Dark and Dominant. Living up to her handle “The Picky Submissive,” she’s on the verge of giving up and settling for vanilla with a side of fuzzy handcuffs when she discovers her best friend and colleague has a kinky side, too.

Sexy, tattooed techie John Sun is an experienced Dom who never lacks for playmates, male or female. If he can’t satisfy Robin’s cravings, maybe no one can—after all, he knows her better than anyone. So he offers to help her master the art of submission for one month.

Robin eagerly agrees to John’s terms, even the pesky little rule forbidding any friendship-ruining sex. But rules are made to be broken, and once they begin their stimulating sessions, it’s not long before she’s ready to beg him for more—much more…

What worked for me (and what didn’t):  There was a lot to like about this book but I confess it wasn’t until Robin and John’s relationship turned sexual (just over halfway through the book) that it really hooked me.  It’s not as bad as it sounds. At the same time they started having sex, their emotions  were also more actively involved. The emotional component had been deliberately constrained when the “project” was more of an experiment.  It makes sense when you think about it. I was interested and entertained but it didn’t become a real page-turner for me until the emotions were all out there and messy – at least out there to the reader.  When the characters allowed their connection to mean more than just research, that’s when I was truly won over.

Right at the end, the book lost me just a little – the final conflict felt a little manufactured and it’s resolution was kind of a fizzler for me and, I would have liked a little more about how the more practical (and non-BDSM) side of their relationship was working.  That’s because the authors did a good job of explaining why John and Robin hadn’t gotten together sooner.  Robin is a bit of a control freak when it comes to organising her house and her life and John is… not.  Apart from the D/s he does, he’s a very laid back guy and I was curious about what they had negotiated and how it worked on the homefront. I knew they were friends and I knew they were sexually compatible but I didn’t see them sorting out the challenges of sharing a home – and I would have liked to.

What else? As I said above, there is a lot to like.  The sex (when it happens) is hot, there is a definite connection (and not just sexually) between Robin and John.  I also liked the way John’s ethnicity was present but also not a big deal. It was part of his character but in no way fetishised.

I’ve read a couple of books in a row where the writing was by an author duo. Fortunately, both have been fairly seemless in terms of “voice”.  I couldn’t tell who wrote what sections and I didn’t feel jarred by any sudden shifts in style. That is not always the case, I find, in such partnerships.

I liked how John and Robin talked to each other and didn’t let conflict last a long time between them.  It was romantic and satisfying and I’m glad I bought it.

“Well, I mean, not that many risks. So we’re sleeping together. You’re not my boyfriend or anything, right?”

“I don’t know,” he confessed. “You’re so many things to me, I’m not sure how to draw a circle around it all and give it a name.”

2 comments on “The Dom Project by Heloise Belleau & Solace Ames”