At Your Pleasure by Meredith Duran 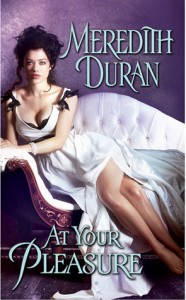 Why I read it:  I listened to My Sweet Folly recently and that put me in the mood for a rich and lush historical. I thought this one from my giant TBR pile might be just the ticket.

What it’s about: (from Goodreads)  By candlelight she lures him…

Glittering court socialites and underworld cutpurses alike know that Adrian Ferrers, Earl of Rivenham, is the most dangerous man in London. Rivenham will let nothing—not the deepening shadow of war, nor the growing darkness within him—interfere with his ambition to restore his family to its former glory. But when tasked by the king to uncover a traitor, he discovers instead a conspiracy—and a woman whose courage awakens terrible temptations. To save her is to risk everything. To love her might cost his life.

At swordpoint she defies him…

Lady Leonora knows that Rivenham is the devil in beautiful disguise— and that the irresistible tension between them is as unpredictable as the dilemma in which Nora finds herself: held hostage on her own estate by Rivenham and the king’s men. But when war breaks out, Nora has no choice but to place her trust in her dearest enemy—and pray that love does not become the weapon that destroys them both.

What worked for me (and what didn’t):   The central conflict of the story is widowed Nora being torn by the love she has for her brother, David, who is a Jacobite rebel and her love for Adrian, Earl of Rivenham – who is a man loyal to the King.  For much of the book, I wondered how on earth the story could end happily.  Nora has a choice to make – she cannot support both her brother and Adrian. She tries hard to walk a middle line but it is impossible.  If she chooses David, she will lose her love (and he might lose his life), if she chooses Adrian, she will most likely watch his execution.

When the book begins, Nora and Adrian, briefly lovers six years earlier, are estranged.  He believes she betrayed him and married elsewhere; she believes she succumbed to the marriage thrust upon her by her father after Adrian did not come to her as he promised.  Fortunately, once Adrian and Nora are together (which occurs when Adrian comes to Hodderby to arrest David  and bring him back to London for trial (and likely execution) for treason), the truth comes out quickly.  Generally, misunderstandings are not my favourite trope, but here, it was understandable and better yet, it was not drawn out once they were together again.  The history Adrian and Nora have enables the reader to accept that Nora could be attracted to a man who may well be responsible for her beloved brother’s death and explains the difficulty Nora has with choosing between them.   Nevertheless, when Nora and Adrian first kiss and feel passion for one another, it is before the misunderstanding has been cleared up and it did take me somewhat aback at the time.  I guess, I was so caught up in what each believed of the other and the consequences therefrom (Nora’s marriage had been particularly brutal) I wasn’t ready for them to let go of those feelings in anyway.  Or something.

Nora is a very clever woman and one of the things which always set Adrian apart was that he listened to her and was happy for her to have opinions and make her own choices.  When, in the course of the book, Adrian takes away her choice about something important however (even if  it was for noble reasons) it was very difficult for Nora to forgive and I’m not entirely sure I was able to do so myself.  At least Adrian had a care for Nora’s wishes, something none other of her family (or her previous husband) ever did.

I loved how quick of wit Nora was and some of the zingers she handed out were most excellent.  Below is an example, where she is being baited by a young, boorish, man in Adrian’s party:

“The court has suffered most sorely for your absence. We hardly know where to find our amusement now.”

It had immediate effect, causing Lord John’s lips to tighten. He opened his mouth, no doubt to apologize, but she spoke quickly to forestall it. She was not in need of protection; cattish words gave her no trouble, and it was not Rivenham’s place to protect her anyway. “I am sorry to hear that,” she said to the boy. “I suppose it take some wit to produce one’s own entertainment. Are you often bored?”

I enjoyed the book and was satisfied at the ending, even if I felt there was some fortunate convenience there to bring it all about.  I didn’t find quite the richness of language, or at least, not to the same degree as in Written on Your Skin for example but I very much appreciated the historical take on a woman who wanted to be herself and not just chattel and the challenges that brought about for her.

I liked this one but there was something about it (I don’t know what exactly) which left me a little disconnected to the characters.  As my emotions weren’t fully engaged, I felt a little like I was reading from a distance.  That being said, I did enjoy the story and it was nice to dip my toe into the historical waters again.

2 comments on “At Your Pleasure by Meredith Duran”