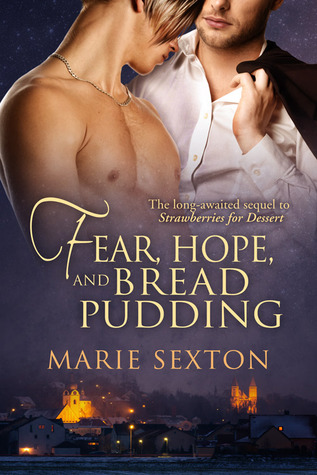 Why I read it:  Strawberries for Dessert  (scroll down after you click the link to see my review) is my favourite of the Coda books (all of which I love) and Cole is my favourite character of the series.  I bought this book a while ago and I approached reading with a mixture of nerves and excitement – more Cole (yay!) but would it (could it) live up to Strawberries?

What it’s about: (from Goodreads)  Families should grow, not shrink. It’s been on Jon Kechter’s mind since before he tied the knot with his millionaire lover, Cole Fenton. Now hoping to adopt, Jon and Cole search for a mother-to-be willing to let them love her baby, but the interminable wait is wearing on them both.

Jon is close to his father, George, but until Cole, he didn’t have anyone else. Now George is pushing Cole to reconcile with his estranged mother. When the three of them spend Christmas with her in Munich, the results are disastrous. Jon and Cole resolve to stay positive, but no hope exists without a tinge of fear. Jon and Cole can’t help but wonder if their dream of being parents just wasn’t meant to be.

What worked for me (and what didn’t): No time spent with Cole Nicholas Fenton Davenport III is ever wasted. That said, this book I thought the book was more of an extended epilogue than anything else.  I don’t think a new reader could come in and really understand what makes Cole tick and without that, I don’t think .  But it does make a nice endpoint to Strawberries and it was nice to see Cole and Jon so happy together.

I have felt Cole’s longing for a child and the hope that can sometimes be so painful as well as his fear so I could definitely relate to what he was going through.  And, I understood the powerlessness that Jon felt at the same time.

There was a section of the book from the perspective of Jon’s father George.  While I understood why it was there from a narrative perspective, I would have liked more with Cole and Jon.  The rest of the story is told from Jon’s POV but there are emails from Cole to Jared interspersed through the text – i.e., like in Strawberries.

It has been a while since I read the first book, but I had the feeling that Cole hadn’t really changed that much. Which is both a good thing and a bad thing.  Good, because Cole is delightful.  On the other hand,  I had hoped he would be feeling a little less vulnerable now that he is married to Jon and secure in his love but I’m not sure that was the case here.  Of course, it could just have been that most of the book was the anxiety of waiting on a potential adoption so that could explain it.  Cole makes my heart hurt because he is so vulnerable and I just want to wrap him up and keep him safe.

I found the story hard to grade because it did feel kind of incomplete in the sense that I don’t think it could be read as a stand alone really and it was very episodic and therefore it felt a little jerky to read – like a DVD which skips.  However: Cole and Jon.  Whom I love. Especially Cole.  So – full disclosure: my grade comes with bias.

The story did make me want to read Strawberries again.  Because, as I said before, time spent with Cole Nicholas Fenton Davenport III is never wasted.

Tagged with: contemporary, Marie Sexton, queer
Posted in: B reviews

7 comments on “Fear, Hope and Bread Pudding by Marie Sexton”