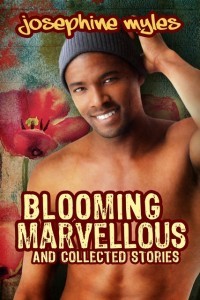 Why I read it:  The author sent me a copy her latest anthology of short stories, for review.  I think it takes special talent to write short (not a skill of mine really!) and sometimes, a story of only a few pages is just the ticket when I am pressed for time, having trouble deciding what to read next or I’m just feeling flighty.

What it’s about: (from Goodreads)  What do a graffiti artist, a nerdy virgin, a lunar cop, a handsome devil, a sexy boater, a disgraced aristocrat and a misbehaving valet all have in common? Bestselling gay romance author Josephine Myles, of course! In this collection of nine short stories you’ll find all these characters coming together (quite literally sometimes).

The collection mingles contemporary erotica with a hint of a happy future with historical, paranormal and futuristic kinky romance. There are even a couple of stories that are sweet romance. One thing you can be sure of, though: the blokes in these stories will always get their man!

Buckle up for Jo’s British sense of humour and fun, and don’t be surprised if there’s sex in the potting shed, because with Jo, anything can happen.

NB: all these stories have been previously published in anthologies or on the author’s website.

Blooming Marvellous This delightful story is about graffiti artist, Ky, completing community service who meets up with newcomer, James, a clean cut professional type who had an embarrassing incident with a policeman while under the influence and thus finds himself planting flowers in the middle of a roundabout. On the surface the pair have little in common but looks can be deceiving.  It has an appropriately hopeful ending for the story length and I liked it quite a bit. And Ky could totally be the guy on the cover.

River Rat I could easily have read more of this one.  An art student has a thing for gypsies after a carnival incident some years prior. Just such a man is working on or around his boat and makes money selling boat fenders he makes out of knotted rope.  The story is really about their first interlude and while it has a hopeful ending, it isn’t a romance per se.  However, there was something in the way the characters interacted, even in only a few pages, that indicated there was more to them than just a random hook up.  I liked it.

The Devil Went Down to Swindon Possibly my least favourite of the anthology, this story was about a guy who meets “the devil” one night in Swindon – he refuses to trade his soul (he doesn’t believe in them) for a chance at Pop Idol success but does agree to trade his body.  The twist about the devil’s real identity made sense but I had a bit of trouble fitting it into my theology and it made me vaguely (and only a little) uncomfortable.  Which says more about me than anything else.  I did like the Pop Idol bit at the end. And I liked the interaction between the two main characters, it was just that I had a little trouble engaging completely with the concept.

Passive Resistance This short is a futuristic sci-fi-ish tale about a pair of intergalactic policemen who locate some stolen alien devices.  The pair have a complicated sexual relationship – Gerryn wants more intimacy but Sarkan seems to regard Gerryn as merely a convenient body and doesn’t confine his activites to just Gerryn either.   Having located the Mithrianni Circlets, Gerryn decides to put them to use and turn the tables on Sarkan for once.  (I tell you, these circlets are fascinating).  It wasn’t entirelyl clear to me exactly how happy the happy-for-now ending was because there was more information I wanted to know about Sarkan and his feelings.  But the I enjoyed the concept very much and would be happy to read more about this pair.

The Frog Prince Cute sexy story about Simon, who fancies Jasper the man in charge of the local organic allotment project. After a night relocating frogs, Simon discovers that Jasper fancies him too.

Three Wishes Sweet (and safe for work) story about a guy whose eyes are opened to what is right in front of him when his friend Tyler gives him a box of 3 chocolate wishes. I guess I would have liked a little more about how Eddie changed his feelings towards Tyler because he seemed so set at the start.  But it was cute and I liked the take on the wishes and how they are made to come true.

Dragon Dance is a YA story about two teenagers preparing to do the Dragon Dance for Chinese New Year.  I did think the easy acceptance of their sexual orientation was a bit idealised.  And they were terribly brave.  But I liked this friends to more story quite a bit.

What else?  Overall, the anthology is a fairly eclectic mix, but it does showcase how this author writes in various romantic/erotic subgenres.  I like her contemporary voice best, but that probably reflects my own reading tastes at present which is largely for contemporary settings.  The historical and the sci-fi story were both very good also.   The collection is fairly short – just over 110 pages and most of the stories are only a few minutes’ reading. The stories are perfect for when you have only short bursts available for reading or as a “palate cleanser” between bigger novels.