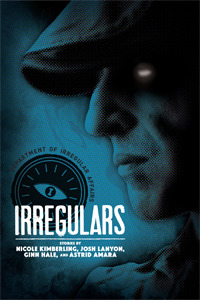 Why I read it:  Brie has been telling me I need to read this book for ages.  The DABWAHA tourney moved it up the TBR pile.
What it’s about: (from Goodreads)  It’s a secret international organization operating in cities on every continent. It polices relations between the earthly realm and those beyond this world, enforcing immigration laws, the transfers of magical artifacts, and crimes against humanity.The agents who work for the NATO Irregular Affairs Division can’t tell anyone what they do, or how hard they work to keep us safe. It brings a colorful collection of men together:Agent Henry Falk, the undead bum. Agent Keith Curry, former carnivore chef turned vegetarian; Agent Rake, Babylonian demon with a penchant for easy living; and Agent Silas August, uncompromising jerk.

Cherries Worth Getting by Nicole KimberlingI will admit I had not read even the blurb before starting this book.  I knew it was set in an alternate world and there were four stories each in the same world and each featuring an m/m romance.  That was it.  So the cannibalism issue came as a bit of a shock.  It’s kind of Men in Black without as much humour (that’s not a criticism).  Agent Keith Curry is paired with former lover Agent Gunther Heartman to investigate the “Cannibal Killings”.  The investigation was slick and there was a kind of vague noir feel to it as well – sort of Watchmen-ish IMO.  As the first book in the anthology, this author had the responsibility to paint the first picture of the Irregulars world.  I thought it was very well done – no info dump, snippets of information that make the world more “real” – like the way goblins eat cigarettes rather than smoke them.  No doubt the world building will continue over the course of the book, but I thought the set up was very well done.

I found myself very interested in where the investigation was going and the way the disparate threads were woven together – I’m first and foremost a romance reader, but the mystery hooked me here.

I’d describe the romance as “developing” and the end is a HFN with promise.  Because the story is only over a few days, there was no opportunity for believable development of a significant romance – the men were busy investigating their case for many hours in the days and there wasn’t much space for sexytimes.  I suppose I would have liked a little more of the romance but that kind of seems unfair because I’m not sure where it could have gone in the story.  Still, Keith and Gunther have more things to work through I think.  I’d happily read more about this pair, that’s for sure.

Archer Green works as a curator for the Museum of State-Sanctioned Antiquities in Vancouver.  He is half-fae and, privately, seeks to restore certain heirlooms to his family.  Commander Rake is the new man in charge of the local branch of the Irregulars and the two men have a philosophical difference when it comes to the dispensation of artifacts from other realms.  I enjoyed the cat and mouse game Rake and Archer played and the way the author conveyed the emotion of the two without a lot of overt dialogue.

I didn’t quite get exactly what Archer was doing right at the beginning of the story and I felt it wasn’t ever explained.    I did like Archer and Rake but I thought the resolution was a bit rushed, with parts of it being a little too subtle (which is code for I didn’t understand it but I think it was me).  I would have enjoyed the story better if it had been a little longer but as it was, I had the feeling I was missing something.

No Life But This by Astrid Amara

This story was the darkest of the book – I don’t mean that literally, but it is that too as the other world of Aztaw was actually completely dark.  Agent Silas August is investigating the murder of his partner and his partner’s sister.  The Irregulars call in an Aztaw consultant, Deven Shaw to assist.  Deven was taken to the Aztaw realm by his diplomat father at age 10.  After his dad went insane, Deven was left there, basically to fend for himself.  His experiences in Aztaw have left him with a unique ability to understand the realm, a special power and many bitter memories.  He has been back in the earthly realm for just over a year and is still learning things like communication, morality, relationships.    My grade for this story is more to do with my general distaste of horror than anything else.  The Aztaw in general and the bad guy in particular were pretty horrific.  There were some lighter moments which I appreciated (Deven wanting to try watermelon) and I liked the slow build of the attraction between Silas and Deven.  I thought there were some things about the ending that hadn’t been well set up during the story however.  The pen thing was very clever though – a really unusual way of spell casting and the concept of “calendars” was intriguing.  I think if it hadn’t been so horror-y I would have liked it much more – this is more a personal taste thing than anything else.

This story was superb.  “Half-dead Henry” Falk is an Irregulars agent who is helping on an assignment when he meets Jason Shamir.  Unbeknown to Jason, he is both in a great deal of danger and the wielder of exceptional magic.  Cleverly woven throughout the previous three stories, as facts and snippets which only enhance this story.  The previous stories are enjoyable for themselves but reading them in order just adds to the atmosphere and set up of this one.  Again, there were some things which felt unexplained or perhaps just too subtle for me (eg, the Shade lands in general, what Henry meant by “dug out from the field”) but the story had love, sacrifice, an epic quest, a road trip and a rescue so lots of my favourite things.  I’ve never read anything by Hale before but I will definitely be reading more from this author. Some of the imagery and prose was really very special.

That was fine with Henry; he’d found glory an overrated commodity. Didn’t keep a body whole or even make for good company through the lonely evenings that followed its capture.

Absolutely average—less than average, in fact, since most young people still carried those tiny charms of a mother’s kiss on their cheeks or a father’s best wish upon their brows. But this youth lay devoid of even the smallest blessing to protect him.

What else?  I was somewhat disappointed to find quite a few typos in the text.  I had heard this press has a reputation for excellence.  I’m not sure if the missing words were errors in format conversion or something else but it was a bit of a let down.  There were also a few other errors – “censure” for “censor” and “peaked” for “piqued” for example. *sigh*.  Moving on.

For the most part, the romance in all four stories was understated and there was more of a HFN

Overall, I’d say the book was darker, with more of a horror feel to it than I had been expecting.  I’m not big on horror, so that affected my enjoyment of the stories.  That said, the final story was excellent and reason enough to spend my money and buy the book.