Promises Made Under Fire by Charlie Cochrane 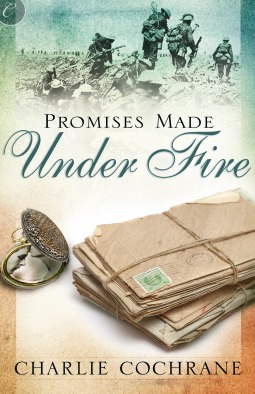 Why I read it:  I picked this one up from NetGalley.
What it’s about: (from Goodreads)   France, 1915Lieutenant Tom Donald envies everything about fellow officer Frank Foden—his confidence, his easy manner with the men in the trenches, the affectionate letters from his wife. Frank shares these letters happily, drawing Tom into a vicarious friendship with a woman he’s never met. Although the bonds of friendship forged under fire are strong, Tom can’t be so open with Frank—he’s attracted to men and could never confess that to anyone.

When Frank is killed in no-man’s-land, he leaves behind a mysterious request for Tom: to deliver a sealed letter to a man named Palmer. Tom undertakes the commission while on leave—and discovers that almost everything he thought he knew about Frank is a lie…

What worked for me (and what didn’t):  First off, that’s a really great cover.  It sets the tone of the novella (it’s only 60 pages so that’s what I’m calling it) very well.  For example,  I didn’t expect a high steam level and there wasn’t one.  In fact, I was surprised there was any sex in the story at all, given its length. What there was was quite tame and very much fade to black.  But again, I felt that fit well with the overall tone of the story.  It wasn’t a raunchy sexytimes book.  I found it quite delightful actually.
At the beginning of the story, I made the mistake of thinking of Tom Donald as slightly older and more experienced than her turned out to be – he is only 23 and not sexually experienced at all.  Tom is on the front in France with fellow officer Frank Foden.  They get along well and Tom, who gets occasional, fairly bland letters from his mother, is entertained by Foden’s sharing of his letters – from his aunt, his mother and his doctor wife, Veronica.   Tom is gay but in 1915 times were different, so he is deeply closeted and it is not something ever discussed with his friend Foden.
After Foden is killed in the war, Tom is given a letter from him, asking him for a final commission.  He is to visit Foden’s mother and to deliver a letter to a friend, Ronnie Palmer.  It doesn’t take a rocket scientist to work out what the twist is here but I won’t give it away.
After fulfilling his commissions, Tom starts writing to Veronica and they begin to know each other and fall in love in their letters.  If the story had been longer, I imagine there would have been some beautiful letters contained therein, but as it was, the letters were mainly hinted at.  I didn’t mind the length of this book, it felt right, but I wouldn’t have minded it being a bit longer either, particularly if the letters had been more greatly expostulated.
Where the book fell just a little flat for me was right at the end.  Yes, there is a happy ending and an exchange of “I love you”s but much about the way forward was left unmentioned/undecided.  I would have liked even just a paragraph or two more to give me a hint of what the couple’s plans were.  I’m not a fan of ambiguity and I suspect that others will like the ending just fine the way it is.
It didn’t take a long time to read, the story was quite moving and the sense of place and time was well done.  I recommend.
Grade:  B

Tagged with: NetGalley
Posted in: B reviews