Men Under the Mistletoe anthology 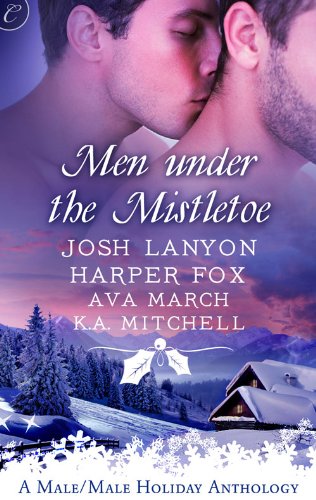 My True Love Gave to Me by Ava March B-  A hot sexy Regency.  Alexander Norton had his heart broken on Christmas Eve four years earlier by Thomas Bennett who abruptly moved to New York.  Thomas has come back at last, realising that he made a mistake in leaving and he tries to win Alex over/back.
I would have liked a little on how they were going to manage their HEA in the circumstances of their time, but otherwise, quite enjoyable if a little melodramatic (I suspect it was because they were young – only 19 when the novella commences). 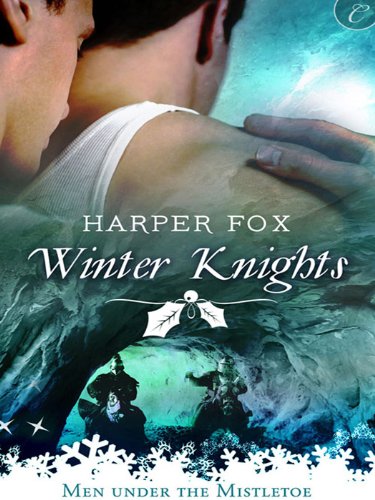 Winter Knights by Harper Fox  – A   *the pick of the bunch for me* Harper Fox writes angst so very well and there is a definite bittersweet tone to this story which was just delicious.
Gavin Lowden is an historian researching Arthur and Lancelot, waiting for his lover, Piers, to join him for their first Christmas together.  But first Piers has to come out to his parents.  He bails and calls Gavin to say he’s not coming and Gavin, lonely and sad, goes for a walk on the moor where he falls into a cave and is rescued by “Arty” and “Lance” who then proceed to teach him a couple of lessons about himself and about sex.  Yes, there is some m/m/m action.  😀  Strangely, it didn’t feel like Gavin was cheating on Piers at all so I was happy enough to go with it.  Besides there was definitely an otherworldly aspect to the story which made it seem more acceptable.
Piers, worried that Gavin has gone missing, comes to Northumberland to find him and they then proceed to work out their HEA.
The story is a clever play on the characters of the Arthur myth and excellent use of the unreliable narrator – We see things from Gavin’s POV but as Lance and Arty ask him questions about his relationship with Piers, we (as well as Gavin) see that Piers wasn’t completely in the wrong here.
Just when I thought the paranormal aspects to the plot were going to unravel, Ms. Fox brought them all together so enough questions were answered that the story made internal sense and wasn’t frustrating, but leaving just enough open to preserve the air of mystery which pervades the story.

Lone Star by Josh Lanyon – B  Enjoyable story about a Texas Ranger and a star New York ballet dancer which was hotter than I’ve read from this author before (not that the two other stories I’ve read are necessarily enough for form an opinion about that I guess).  Having walked in on his lover with another woman, Mitchell Evans flees to Texas – ostensibly to see to his late father’s estate but really to get away from the domestic mess at home.  He meets up with Web Eisley, his first love and they rekindle their romance.   When Mitch had last seen Web, they’d had a big fight when Web didn’t want to come out to his family.  Mitch left town shortly after and nothing was really resolved between them.  The romance aspect was sweet and sexy but the ending came a bit abruptly for me.
There was also a nice thread running through the story about Mitch’s relationship with his father which was bittersweet and added depth to the story overall.
I still don’t understand the significance of the reindeer sightings, other than that it was Christmas and I’m not sure I totally bought the ending – I would have liked a bit more exposition about how it was going to work, but I did enjoy it.

The Christmas Proposition by KA Mitchell – A-  An excellent story featuring humour, scorching sex,  a nativity play and a wedding which flagged a little at the end for me (hence the minus in the grade).
Mel Halner runs the family Christmas Tree farm in Epiphany, Pennsylvania.  His small town was discovered by natural gas miners 3 years earlier and it was then he met Bryce Campion.   Bryce is a millionaire and left town when Mel said he wouldn’t go with him.  Bryce comes back to town to be best man for the wedding of his best friend to Mel’s best friend.  This time, he’s not going to let Mel say no quite so easily.
Mel and Bryce were oh so hot together and I enjoyed reading about them.  I didn’t quite get why Mel was so gun-shy and the ending  had a touch of the “big mis” which isn’t my favourite.  Still, they sort things out fairly quickly (at least in terms of page time) so it wasn’t a huge deal.
Favourite quotes:

“Since my life had gone totally to shit, it seemed like a good time to go stand in it.”

“…and put his arms around my back, locking us together in that kiss.  I wanted to climb inside him, find that place that let him be so damned self-assured and let it cover us both.”

Yummy covers for all 4 don’t you think?
Overall Grade: B+
Finally, I’d like to wish everyone who visits a Merry Christmas (or Happy Holidays if you don’t celebrate Christmas) and a safe and happy 2012.  I will be taking a short break.  Watch out for posts in the new year!!

3 comments on “Men Under the Mistletoe anthology”