Something Different by SA Reid 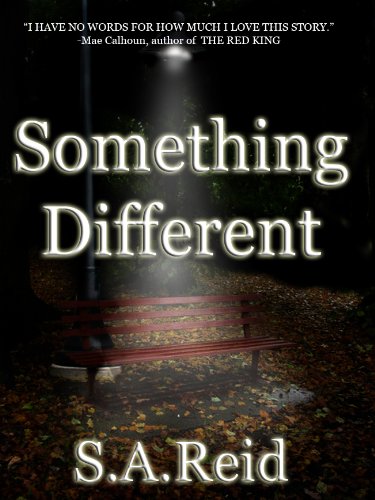 Why I read it:  I read the Sarah’s review over at Dear Author and picked it up from Amazon for the bargain price of 99c.
What it’s about: (from Goodreads) Tired of his life’s endless grind, family man Michael Maguire allows himself one night of deviation. Desperate for something different, he seeks a prostitute in notorious Brixton Park. But Michael, searching for a girl out of PRETTY WOMAN, instead finds blue-eyed, beautiful James Campbell. Tempted and stirred in ways he never imagined, Michael embarks on a sexual adventure with a rent boy from London’s infamous Bethnal Green. And what begins as a purely sexual exchange gradually transforms into something else, as James finds himself in desperate circumstances and Michael is moved to help. Drawn increasingly to James, Michael finds himself facing up to the iniquities in his daily life. And finally he must deal with a horror that threatens to explode Michael’s safe, conventional existence.
What worked for me: Infidelity isn’t usually something I seek out in a main character.  Generally speaking, it’s not terribly attractive.  Perhaps because it is told mainly from Michael’s third person POV, it was actually quite easy for me to go with it in this story.    His desperation for physical connection and for “something different” to break him out of the rut his life has become is something that is painted very well in only a few words.

Michael couldn’t remember the last time he’d had sex with Frannie and there were so many rules he was no longer tempted to try. Weeknights were out, she was too tired from housework and spin class and book club and keeping up with her favorite programs on telly.  Sundays were a no-go; she tended to go out with the girlfriends after church and preferred a nice long evening with the telly when she returned.  That left Saturday, and then Michael had to be freshly showered, the kids had to be either asleep or out of the house and Frannie had to be in the mood.  The likelihood of all these factors coming together was about as favourable as a total eclipse…

Just from those short passages, I can feel Michael’s frustration and despair and I can also see he’s tried. He’s tried to compromise and bend to Frannie’s sex rules but it’s just not working for him.   I didn’t feel that the book ever called upon me to endorse his actions in going outside the marriage – I don’t recall that Michael himself  made excuses for the behaviour or tried to justify it.  And, by the end of the story, the truth had come out and he didn’t make any effort to  blame others for his actions or tell anything other than the truth.  As much as Michael is initially dishonest (with his wife) he is nevertheless very honest with himself and that was one of the things which made him attractive to read about.
Michael finds a connection with James which is initially all about the physical and becomes something more over time.   He’s able to be himself.  And, it is apparent that Frannie was trying to get him to be someone else.  I had quite a deal of sympathy for Michael as I always think that home should be a safe place to fall, and not a place you have to pretend.
This bit might be spoilery so I’ve tried to be clever with the font colour so readers can decide whether they want to know.  (Apologies if my ‘tech skills’ fail here).  Michael has a painful history of sexual abuse by his stepmother which reveals itself in some shocking violence.  I say shocking because I did kind of recoil when I read it.  At the same time, I totally understood it and felt the fat cow totally deserved it and worse (and don’t even get me started on his dad!).   Violence against women is not my thing, but this was an unusual situation and I couldn’t feel much sympathy for her in the circumstances.  But, it was violent and it was against a female so it kind of made me mentally “jump”.  It was sudden and yet it was totally within Michael’s character, both for himself and as a father protecting his son.
Sarah at DA thought the story was somewhat “fable” like and there is that kind of feel to the story.  It does seem a little unreal that a heretofore straight man can take up with a rent boy (or former rent boy as he later is) and there be little to no fall out from it.  Still, it wasn’t all sparkly roses and butterflies and I appreciated that not everyone was happy with Michael and James together.  I think, because it is mainly from Michael’s POV, that what is in the story is what is important to Michael and general bigotry really isn’t.  Of course, I could be totally making that up, but that’s how it felt to me.
James doesn’t just fall into a relationship with Michael and think he’s a meal ticket.  While Michael could have quite easily been taken advantage of (at least for a while – Michael is too smart for this to have gone on long), James didn’t go there.  James chooses to be with Michael and I liked that the author addressed this in the story.  James had a choice and he chooses Michael.
This book sucked me in right from the start.  I loved the style and the voice; I liked Michael and James and I also liked the word synchrony at the beginning and end of the story.  I especially enjoyed Ms. Reid’s ability to paint complicated and sometimes poignant word pictures with only a few phrases.
What didn’t: I was a titch worried about the Michael’s relationship with James being paternalistic and to a certain extent, that wasn’t sufficiently addressed in the book for my absolute comfort.  The financial disparity was addressed and it made sense but the issue of equality could have used a little more exposition.  When I was reading the book, it didn’t bother me overmuch but after I finished and gave it more thought, I wondered what James felt he was giving Michael in the relationship sufficient for him to feel equal. Perhaps it is just that there wasn’t a lot of James’ POV.  The epilogue takes place four years after the main story, so it is clear that something is keeping them together but I did wonder a bit if James would feel the burden of being “kept”.  Michael comes across as a lot older than 34 for much of the book.  I think it’s supposed to be that way – he’s old and tired and in a rut so he reads like a 45+ having a mid life crisis.  But as the story progresses, he regains some youth – he loosens up in his dress and language and his fears about what others may think of him.  So, by the end of the book, while there was clearly a huge gap in age and experiences (on both sides), it wasn’t quite as broad as at the start.

What else? Some commenters around the place have mentioned that all the female characters in the book were all out and out villains or stupid.    I tend to be a bit dense when it comes to noticing things like that but I have a slightly different take on that.  James is dyslexic and his teacher is a female and is portrayed as demanding (in a good way) and supportive and encouraging.  She doesn’t have a huge part in the book, but then, neither does the “villain” (for want of a better term).  As for Frannie, she is seen in a more sympathetic light in the epilogue and it gave me the perspective that sometimes people can seem mean and unkind because they are unhappy themselves and, given different circumstances, are not that way at all.   Michael comes to the realisation that he wasn’t good for Frannie either and that she was never going to be happy with him. I felt the characterisations made sense.  If Frannie had’ve been very sympathetic, I would have questioned why Michael was looking elsewhere and the story wouldn’t have worked for me.
This is a self published book and while it wasn’t totally typo free, it was certainly no worse than many traditionally published books I’ve read.   I hope to read much more m/m from this author whatever publishing arrangements she makes.
I’ve a feeling that I have failed to express how much I enjoyed this book.  I’m sorry for that, because it was a great read and one I’m sure I will revisit (which is a rarity for me).
Grade:  A-/B+

9 comments on “Something Different by SA Reid”