Until There was You by Kristan Higgins 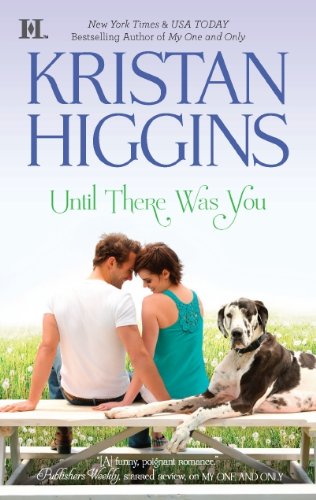 Why I read it:    I got an ARC from NetGalley and, with the exception of her last book, My One and Only, I’m a fan of Kristan Higgins.
What it’s about: (from Goodreads)  Posey Osterhagen can’t complain. She owns a successful architectural salvaging company, she’s surrounded by her lovable, if off-center, family and she has a boyfriend—sort of. Still, something’s missing. Something tall, brooding and criminally good-looking…something like Liam Murphy.

When Posey was sixteen, the bad boy of Bellsford, New Hampshire, broke her heart. But now he’s back, sending Posey’s traitorous schoolgirl heart into overdrive once again. She should be giving him a wide berth, but it seems fate has other ideas….

What worked for me: This is the first book Kristan Higgins has written in the third person and for the first time ever, we get a fair portion of the book in hero’s POV. I can’t tell you how much I have wanted this in her books. I loved it. I can’t stress this enough. Loved. It. She writes such good heroes it has always been my complaint that there wasn’t enough of them. (Except for the last book where I didn’t care for the hero much).
What didn’t: As much as I loved the foray into third person and the hero’s POV, there were things that didn’t work so well for me in this book. In the middle of the romance, I was told not shown and I hadn’t had enough to completely believe that love had developed.  It was the literary equivalent of the musical montage in the middle of a romcom. I needed a bit more showing.
The story about Liam’s in laws was resolved too quickly and easily and the bit about Liam’s OCD never reallly went anywhere.
I’m not sure that I bought that (Posey’s brother) Henry and (his partner) Jon were happy and would remain that way because Henry seemed so distant and Jon was so… not – I wondered if they would make it. How (Posey’s cousin) Gretchen got over her ‘problem’ – assuming she actually did – was never canvassed. Considering the business arrangement at the end, I’d have thought it needed to be mentioned.
What else: As usual there were some really funny bits which made me laugh (and occasionally, snort), especially with Liam being the big bad dad with daughter Nicole’s would-be boyfriend Tanner. Did I mentioned I loved having Liam’s POV? I did? Well, it’s worth repeating.
I also liked that Emma, the wife who died was neither deified nor demonized. Hooray.
As for Posey, there were times she was just a bit too desperate and even though it was probably totally authentic, it still made me cringe. Also, she was way more forgiving of Gretchen than I would have been.
Overall, Posey was almost too nice. She didn’t really grow or change through the story and she was just about everyone’s favorite person, except for Gretchen and even then, they ‘kissed and made up’ by the end. It was just a little too saccharine.
I would also have liked some of how Liam got to his big declaration at the end – I felt that was missing. His experience with his first wife was that she withdrew from him and that he felt he was never good enough.  What made him think that wouldn’t happen with Posey?  I mean, I don’t think Posey would pull away, but what made Liam so sure?  That part was missing for me.  It sounds like I’m really picking but I’m only doing it because I was so invested in the characters.  It’s because I liked Liam so much that I want to know more.
In the end, I enjoyed this book. Much more than the previous one but not quite as much as the one before that. I wanted to like it even more – I want to encourage Ms. Higgins to write the hero’s POV because, boy howdy that was the best part of the book. Please please please Ms. Higgins, continue to write and continue to show us more of the hero.
Grade: B- (but I really wanted it to be a B).

2 comments on “Until There was You by Kristan Higgins”